Asians in SF are frequent targets of assaults. This isnt new, and the usual suspects are often times not mentioned. I’m glad CBS actually release the sketch. 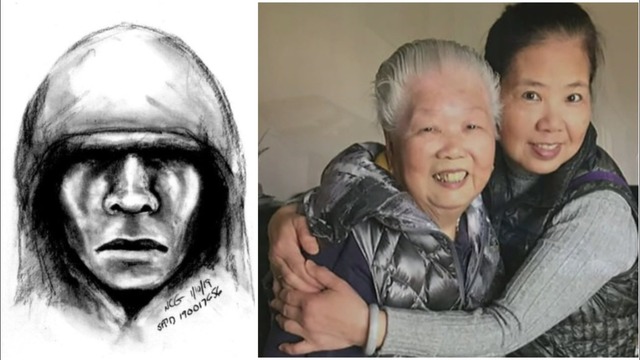 SAN FRANCISCO (CBS SF) — An 18-year-old man has been arrested in connection with a brutal assault earlier this month in San Francisco that left an 89-year-old woman with life-threatening injuries, police said.

Police arrested Keonte Gathron in San Francisco on Saturday evening after he allegedly committed another robbery.

Gathron is suspected in the Jan. 8 assault in the 1000 block of Visitacion Avenue. Around 6:45 a.m., a witness reported seeing a male suspect exit a residence from an interior staircase and walk eastbound on Visitacion Avenue.

Shortly thereafter, the victim, Yik Oi Huang, was found unconscious at the Visitacion Valley Playground across the street from the residence.

Huang was taken to Zuckerberg San Francisco General Hospital, where she continues to be treated for life-threatening injuries.

“They are saying swelling has gone down. They’re seeing signs that she is reacting, somewhat to visitors, but it’s ever so slight,” said Cynthia Choi, the Huang family spokesperson.

“My dad found her lying unconscious with her head covered in blood and her arm bruised,” Sasanna Yee, the victim’s granddaughter, told KPIX.

Police say their investigation led to evidence linking the person leaving the residence to the assault.

“This is an ongoing investigation, and we will have further details to follow later in the week,” San Francisco police Chief William Scott said in a written statement. “But we want to express our gratitude to neighbors and leaders in the Visitacion Valley community who worked closely with our investigators to address this senseless act of violence.”

“Today, we have learned that the SFPD has apprehended a suspect connected to the attack on Ms. Huang. I want to thank SFPD for your diligence in investigating this case. Our community still has a lot of work to do to heal,” Walton said in the statement.

Walton said he held a community meeting on Saturday to talk with neighbors about their safety concerns. He said there is a lot of fear, but he hopes to bring in city resources to install security cameras, build a police substation, and create neighborhood watch groups.

“We’re going to fight to make sure that things like this don’t happen again,” said Walton.

The San Francisco Police Officer’s Association is also involved in the case. Last week, the organization offered a $10,000 reward for information in the case. Representatives of the SFPOA also say they’ve suggested putting a Mobile Command Center in the neighborhood and staffing it with officers 24 hours a day, 7 days a week.

“I think it would really go a long way in terms of making the community feel safe and not feel in fear,” says Matt Lobre, the secretary for the San Francisco Police Officers Association.

SFPD investigators are not releasing many details about what evidence lead them to Gathron. They also have not released a photo of Gathron, saying there are pending identification matters. Investigators said in a press release Sunday that they “will have further details to follow later in the week.”

I really hope that the animals who prey on the elderly get the same treatment as rapists and pedophiles in prison. Knuckle dragging Keonte deserves nightly visits from Tyrone.

I wonder if BLM activists will say anything about this animal, I hope Trump doesn’t say anything because the left will condemn Trump more and focus the attention towards Trump vs the animal scum that attacked a defenseless senior citizens

I hope that San Fran PD tuned this bastard up, I hope the judge throws the book at this little bastard and he becomes a permanent member of the Ass class in the harshest penitentiary .