Sen. Feinstein is colluding with the foreign minister of Iran

Feinstein and Kerry…birds of a feather! TRAITORS!

Sen. Feinstein is colluding with the foreign minister of an enemy state

Senator Dianne Feinstein was on the phone with the foreign minister for the terrorist enemy state of Iran, Mohammad Javad Zarif.

Senator Dianne Feinstein was on the phone with the foreign minister for the terrorist enemy state of Iran, Mohammad Javad Zarif. What is she doing? They’re threatening to kill U.S. soldiers in the Middle East. Zarif is the same person John Kerry is colluding with behind the President’s back.

I am sure you on’t hear any of that from the left or on any of the MSM.
They’ll just say, “She was trying to make a deal.”

That is total BS, and she knows better than to do something like that.
A typical Democrat.

That is total BS, and she knows better than to do something like that.
A typical Democrat.

Agree! I really want to see Her and Kerry prosecuted! Why it doesn’t happen is confounding to me because clearly they both broke the law! See Logan act! 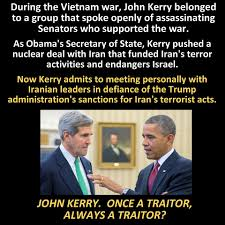 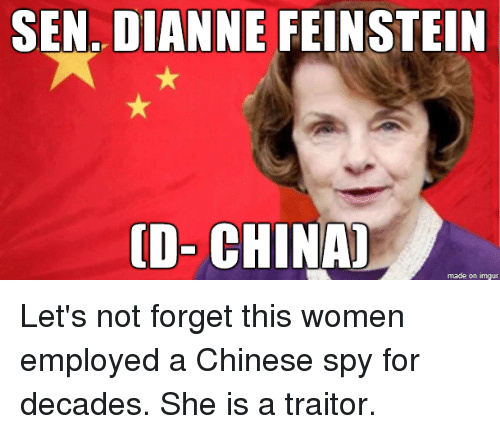 Well Feinstein allowed the Chinese to spy on us for 20 plus years and the Biden’s are in bed with China to the tune of BILLIONS !!!

As chair of the Senate Select Committee on Intelligence, Democrat Dianne Feinstein had a Chinese spy on her staff. Chinese intelligence recruited the top aide at her California office, and he reported back to China about local politics [and who knows...

More Information on Sen. Feinstein's Secret Meeting with the Enemy

Senator Diane Feinstein is colluding with the enemy. She met secretly with Iran’s foreign minister Javad Zarif while our troops are deployed to the region due to threats from the terror nation. This is the woman who had a Chinese spy working for her...

Wait for it! Once the full truth is revealed and others before them are held to account Diane and Kerry will be facing the music as well! Justice for all!

I wonder if Kerry and Feinstein were called “useful idiot” to their faces in Persian, would they know it.

(This post generated a warning that it might be considered offensive. Diane and John… if you are reading this … Up yours! )

Who knows? But their network is becoming frayed due to Trumps foreign policy of closing down “black sites” in which Obama and his minions purposely set up in order to destroy American sovereignty! This is not something you are going to read about in the MSM, but make no mistake moves are being made against these two and their desperation is showing! They clearly have violated the Logan act and need to be held to account! Especially Feinstein who is up to her eyeballs in colluding with the CHICOMs with her Husbands business interests in China!