San Diegans can fly over rush-hour traffic with FLOAT

CARLSBAD, Calif. (KGTV) – Starting in January, San Diegans with a long commute can choose to ditch the traffic and fly to work thanks to a start-up service co-founded by a UC San Diego graduate.

FLOAT, which stands for Fly Over All Traffic, is a commuter air service that will operate a fleet of nine-passenger planes at small airports throughout Southern California.

Like van pools, routes will be determined by customer demand. There is already interest in service out of McClellan-Palomar Airport in Carlsbad, the company reports. Other San Diego airports like Montgomery-Gibbs in Kearny Mesa and Brown Field in South Bay could be added, said co-founder and CEO Arnel Guiang.

"FLOAT is shattering the myth that sitting in hours of traffic every day is a necessary and unavoidable way of life in Southern California,” said Guiang.

A base membership will cost $1,250 per month for flights five days a week, he said. That means each leg of the commute will cost about $30.

Guiang, a UCSD computer engineering graduate, said he came up with the idea for FLOAT while working at Northrop Grumman in Los Angeles County, where his commute took two to three hours a day.

One day, Guiang said a coworker offered to fly him to work in a private plane, shaving his commute to about 20 minutes.

“With the high cost of living, more Southern Californians are finding nice homes at attractive prices in the suburbs outside of thriving business locations, which leads people to lengthier commutes,” Guiang said. “Carpool and vanpool options are only shaving a few minutes off these commutes, and these lengthy commutes are cutting into people’s quality of life.”

The service is targeting so-called “super commuters,” those with commutes of 90 minutes or more each way. There are nearly 26,000 super commuters in San Diego alone.

Customers will be able to walk onto a plane in minutes using an app, without security checks by the TSA, Guiang said.

FLOAT will start with three planes at first, and the company says the idea is taking off: more than 700 people have signed up so far.

Customers can request a route here . 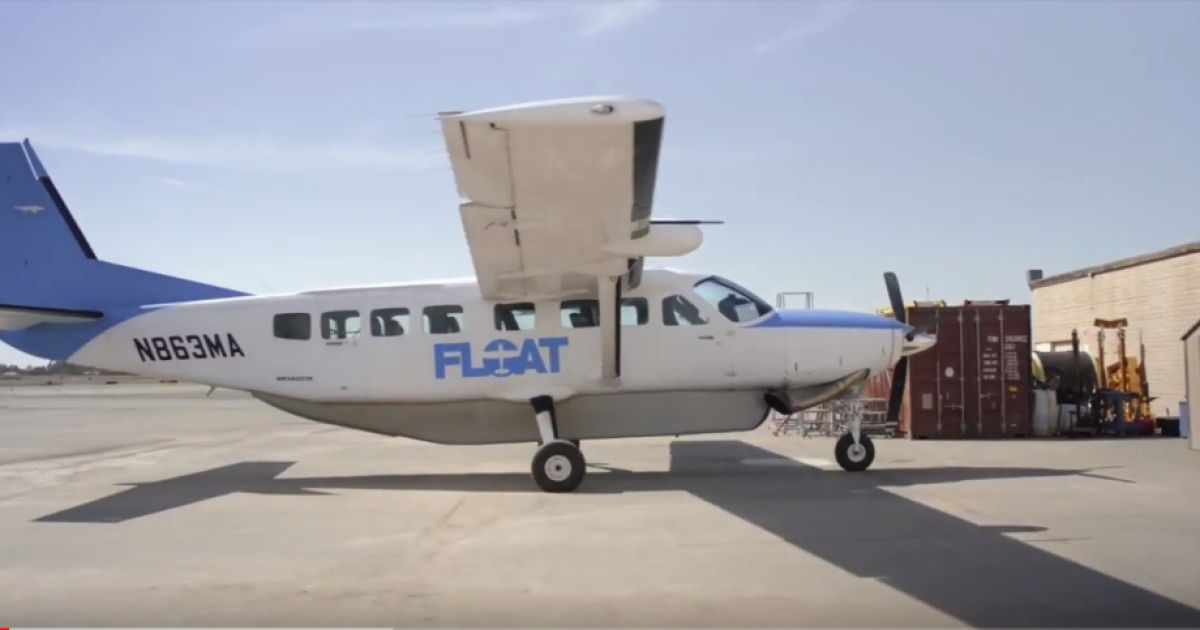 Starting in January, San Diegans with a long commute can choose to ditch the traffic and fly to work thanks to a start-up service co-founded by a UCSD graduate. 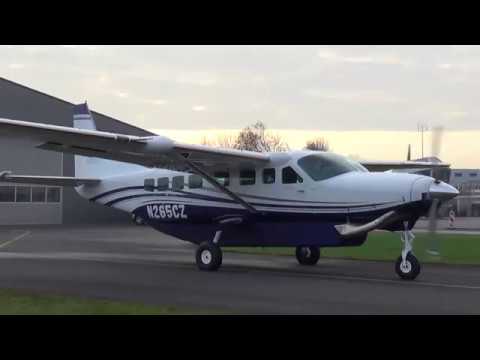 The type of plane to be used is a Cessna Grand Caravan.

This video is unrelated to FLOAT.

From Pomona to Santa Monica and back five days a week would save 17+ hours per week in commuting time. 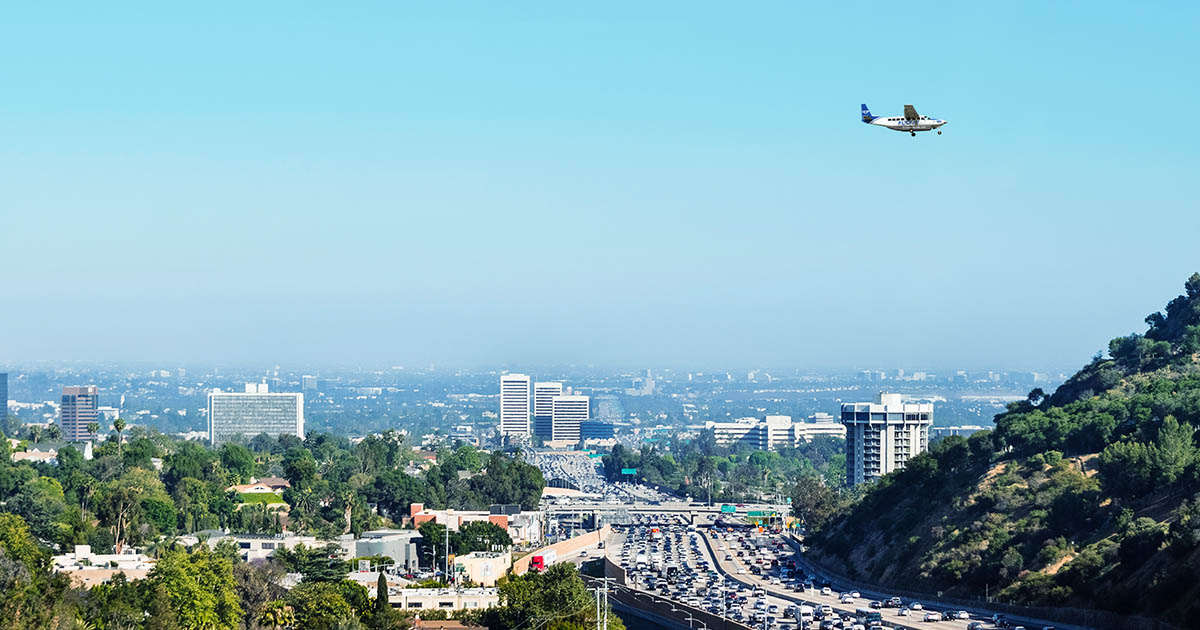 Stop-and go traffic and hours-long commutes are a hassle. Why not fly over all that traffic? With FLOAT you will have access to Southern California area General Aviation airports. No TSA and 15-30 minute flights from one side of the city to the...

Janice Orlando could get used to the idea. She regularly drives from her home in La Habra to do business in Downtown Los Angeles or Santa Monica.

“I have to allow two and a half hours in each direction, just to make sure I’m always on time. It’s ridiculous,” she said.

“We’re looking for the commuters that are traveling say 50 miles or more per day,” said Arnel Guiang, founder of FLOAT, an acronym for “Fly Over All Traffic.”

Guiang wants super-commuters to fly to work, soaring above rush hour traffic on a highway in the sky while passing L.A. landmarks like Dodger Stadium, the Hollywood sign, and Downtown L.A., leaving the rest of the work to the pilots up front.

Guiang recently invited passengers on a demo flight that went round trip from Brackett Field near Pomona to the Santa Monica Airport on a Cessna Grand Caravan, which can carry up to nine people.

“If you’re lucky, it’s an hour and a half, right? But usually it’s closer to two hours,” Orlando said.

The flight got to Santa Monica in about 15 minutes and flew back. Orlando was amazed. Likely NOT to be used as the company’s musical jingle.

Too bad they keep electing cucks and corrupt Governors that siphoned off money to build their ambitious rail way project otherwise the bullet train would have been a great idea to help ease burdens and spearhead the commute problems of California. Why stupid people keep electing these morons is beyond me! Must be all that “Acapulco Gold” they love to smoke from Mexico that retards their critical thinking skills and makes them lazy!

What would be great is if these planes start crashing onto highways and neighborhoods, causing massive fires to break out, and burning the entire state of California to the ground. Other than that - I don’t care how dumbasses in California commute to work. They could shove balloons up their ass and FLOAT for all I care.

I don’t understand why most jobs just don’t offer the maximum amount of telecommuting. No one really needs to go into the office anymore. It’s easy to track workplace productivity for performance purposes.

Mega companies should just relocate to less congested states, & offer their workers the option ( paid by the company ) to move with them. It would probably be a good move, cost wise. Like, we’re moving from this shit hole in California, and setting up in St Croix USVI; who wants to come along? Then again, St. Croix isn’t that large, so better to move to Texas.

That would be great promotional…

The problem with that is all those California companies will now bring their shithole people with them and make whatever place they inhabit a shithole as well. Let them have to resort to paying $1,200 a month to commute to work. I’ll just sit here and laugh my ass off.

Here is an answer to your question from one perspective which I think nails the biggest reason.

Bertrand Russell was a fervent Communist and this is what he wrote.

The social psychologists of the future will have a number of classes of school children on whom they will try different methods of producing an unshakable conviction that snow is black. Various results will soon be arrived at. First, that the influence of home is obstructive. Second, that not much can be done unless indoctrination begins before the age of ten. Third, that verses set to music and repeatedly intoned are very effective. Fourth, that the opinion that snow is white must be held to show a morbid taste for eccentricity. But I anticipate. It is for future scientists to make these maxims precise and discover exactly how much it costs per head to make children believe that snow is black, and how much less it would cost to make them believe it is dark gray. Although this science will be diligently studied, it will be rigidly confined to the governing class. The populace will not be allowed to know how its convictions were generated. When the technique has been perfected, every government that has been in charge of education for a generation will be able to control its subjects securely without the need of armies or policemen. As yet there is only one country which has succeeded in creating this politician’s paradise.

Agenda - Grinding America Down (Part 1 of 2)

Agenda - Grinding America Down (Part 2 of 2)

I can imagine a harried woman getting ready for work. Coffee. Checking markets. News gathering. Cell phones. Dogs. Kids. Spouse. Checking her watch. running to make the plane. Then chatting with the pilot and the other passengers while boarding the plane. They land. She disembarks. Takes the shuttle to her office. She checks her watch. The announcer mentions that now that she has shaved an hour and forty five minutes off her commute time, she has to figure out what to do with that hour and a half+.

And she sits down on the chaise in her office and pulls a binkie over her and naps until it is time to start working.

All of that to the tune, “Float On” by the Floaters.

I loved the way each performer stated his zodiac sign before he started singing lead. That was a BIGGER deal then than it is today, but it really is a nice little touch of reaching out and I wonder if they ever got tired of the girlie action it must have generated for them.

Not catchy enough. I’d vote for this Here is the inspiration for an ad for a competitor’s helicopter service.