Run Away from Covid or Get Immune?

Does not Donald Trump deserve some credit for finally talking about what we should have been talking about for these last seven horrifying months? He got the bug, shook it off, and thereby beefed up his immune system. He is stronger and now can move about freely, engaging people, shaking hands, and otherwise living a normal life.

Presumably that will be true of many in the White House staff as well. See? It’s a virus, combated naturally by the immune system, same as most pathogens. Like software, the coding structure of the immune system needs to be updated in light of changes.

The optics are impressive. And the case he should make now is that he can travel the country and indeed the world with his beloved First Lady doing Nobel Peace Prize nomination-worthy stuff and returning the economy to a robust condition that will help all the downtrodden to catch up for lost income, without fear and without masking or other authoritarian-ish forms of social distancing.

That’s a real twist. And consider that if Biden were to win, however, he would have to hide in his bunker for at least the first half of his presidency and apparently will try to force the rest of the country to join him, at least for the first few months. He’ll be under pressure to “do something” about the deteriorating economy, which is still struggling and likely cannot survive a second lockdown, but if he ventures about too much he will be subject to withering criticism for not following his own lockdown mandate.

And God help him if he gets a haircut.

What if POTUS Joe catches the Covid? Old Joe will turn 78 this November. Although he appears to be in better shape than Trump, every year of age increases the probability of his death exponentially (this is defensible if one doesn’t mention what the exponent is). Eventually, Kamala Harris would become president. I won’t bore you with the line of succession but some of the folks near the top of the line would likely have to dodge bullets as well as the virus because they are geriatrics hated outside of their gerrymandered districts and would not be welcomed residents of the White House. Certainly they would not have a “mandate” to rule.

But these Democrats are a smart bunch, as evidenced by the fact that they wear masks. True, but recall that “the” scientists say that mask-wearing protects others , not the wearer. Will Biden or Harris not have any contact with the public as they “fight” to do this, that, and the other thing? Will they instruct the Secret Service to push away mothers carrying maskless youngin’s? That would be good publicity, NOT! But they would have to do so because “we all know” that kids are Covid carriers likely to kill even young, healthy teachers and professors. Why else would all those schools and colleges offer only inferior remote instruction this Fall?

Of course it is possible that after Biden’s election a safe vaccine will appear and coronavirus cases will plummet because the whole country will be fighting systemic racism, which as we “learned” over the summer is a major virus inhibitor according to “the” scientists. But we cannot be certain of that and it is difficult to be optimistic after seven months of bad news magically appearing after every tidbit of good news.

All that we can be sure of is that a live Donald will be able to serve the American people without restriction, something his opponents cannot say. So Trump’s message is that anyone who is truly serious about the pandemic has no choice but to vote for Trump.

Or we can be truly serious about the pandemic in a different way. Nobody is, or should be, happy with the way American governments have handled this crisis because over 200,000 people have died and the economy is in tatters (translated: tens of millions of Americans are hurting a lot, inducing some to join Covid-19 victims the old-fashioned way). Lockdowns are unconstitutional and at best delay the inevitable at a price that is too high to pay.

In fact, the most serious that one can be about the pandemic is to join the fast-growing Great Barrington Declaration movement. Read it, sign it, and make your elected politicians implement it.

The Declaration says, in effect, the same thing that I did back in my early April “Plan to End This Madness:” stay at home or wear a hazmat suit about town if you want, but allow others the courtesy of going about their lives. If they get sick and die, it is none of your business. They can’t get you sick if you are in your basement in a hazmat suit or living whatever “social distancing” rules you think fit.

If they get sick and get well, which is much more likely than them dying, even for middle aged fatties like me, then America is one step closer to “herd” or community immunity. The faster that threshold is reached, whatever the percentage of the population it happens to be in this case, the faster everyone can resume their 2019 lifestyles.

In fact, the biggest difference between the Great Barrington Declaration and my April “plan” is that the former was written and signed by bona fide medical experts and since then thousands of other medical experts, plus tens of thousands of common Joes and Josephines like me, have joined the club by rejecting groupthink and thinking carefully about the evidence in favor of liberty and personal/familial responsibility, which is even stronger now than it was in early April.

Regardless of your vote this November, it is indeed time to join Biden in his call to follow “the” scientists, the ones who have signed the Great Barrington Declaration. 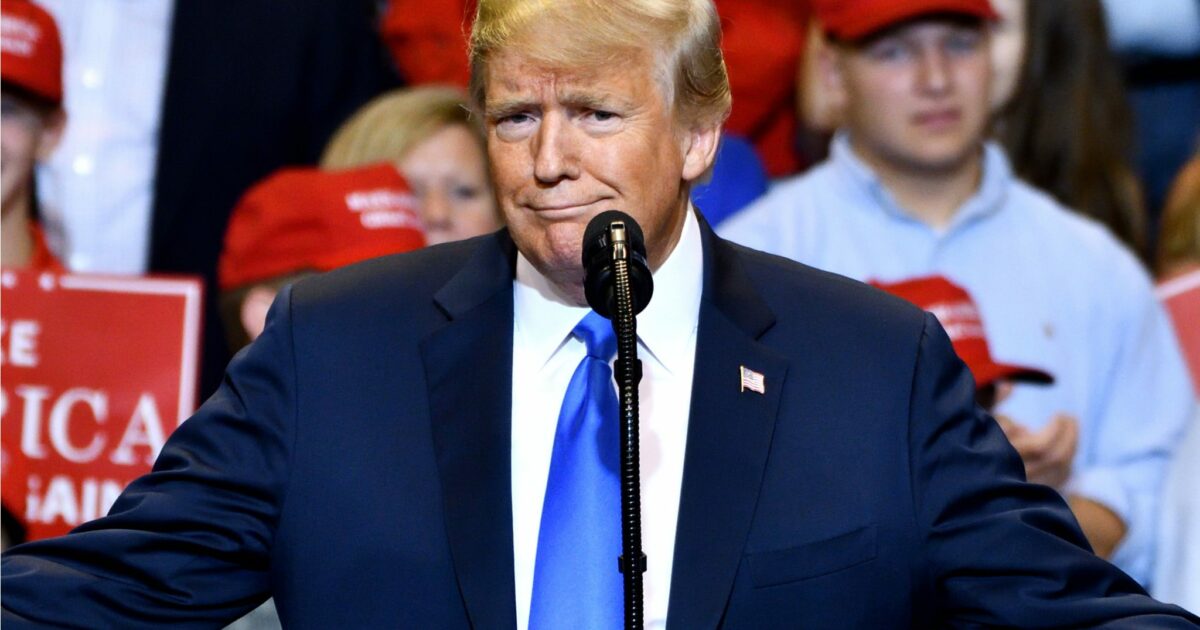 Run Away from Covid or Get Immune?

"Something tells me that rumors that Covid-19 can be caught twice will suddenly be 'proven' by 'the' scientists in a not-yet-peer-reviewed study that will be retracted just days after 3 November. Evidence of the inconvenient truth that survival...

And it didn’t take long to label him reckless and a SUPER CARRIER . Dems are making covid their entire attack on our President . And Half of America is willing to put a dope that had TWO , YES TWO , BRAIN ANEURYSMS in charge of OUR Country . SAD
He claims to be running for a senate seat again , Jill should be charged with elder ABUSE !!

He got the bug, shook it off, and thereby beefed up his immune system. He is stronger and now can move about freely, engaging people, shaking hands, and otherwise living a normal life.

Except he didn’t just get the bug and shake it off. He probably would have died if the doctors didn’t throw everything at him-dexamethosone, regeneron and viral inhibitor. You don’t have access to that.

This virus is no joke. I’ve met several people who lost loved ones.

This virus is no joke. I’ve met several people who lost loved ones.

We’re not denying the virus exists which was virulent initially.
However, many did not die because of the virus, but died with the virus, the real culprit being pneumonia or traffic accident or whatever.

The mistake the Chinese and Italians made was to put the patients in the same closed ward, resulting in the patients breathing in more and more airborne virus.

Ventilators didn’t help either. They killed many patients unnecessarily.

Most who die from the virus do so as they have secondary health issues, Obesity, Over weight, hypertension, cholesterol, and all the issues that go with poor decisions made by people. The only issue that is excusable would be old age.

People are responsible for their health including being a normal size and eating wisely.

It’s pretty sad that the country was shut down by governors, economies trashed and people thrown out of work. The unfortunate part is that instead of one size fits all the governors should have focused on helping those most at risk the elderly and those most at risk. Now w have the results of stupid decisions from the governors and many who died that were elderly due to their actions and inactions.

Most who die from the virus do so as they have secondary health issues, Obesity, Over weight, hypertension, cholesterol, and all the issues that go with poor decisions made by people. The only issue that is excusable would be old age.

That’s not true. Diet (low inflammation, minimize red meat, sugar, vegetable oil, GMO foods), vit D, age, and stress are the three most important factors. Asian countries eating low inflammation diets had half the death rates. A lot of the publicized information is heavily censored. I think it is a eugenics strategy and they want to kill a lot of poor and elderly people.

How do you know ? Next you will claim having black pigmentation has twice the death rate . Oh wait , I did hear the virus was racist .

60% of Americans are over weight or obese.

That means thy cannot stop stuffing their faces with food.

Ever look around you and really look at people???

Asian countries have half the death rate because they eat half the fiord Americans do.

You clearly know nothing about asians in the US.

Except he didn’t just get the bug and shake it off. He probably would have died if the doctors didn’t throw everything at him-dexamethosone, regeneron and viral inhibitor. You don’t have access to that.

President Trump said that the meds used for his treatment will be available throughout the country for doctors to treat patients so if you can’t get them it’s most likely you have a Governor who suffers the visceral hatred of TDS.

Because they have totally different

Ways of counting the deaths , in the USA they counted almost every death Covid related !!! Diets , diets , PLEASE !!!

President Trump said that the meds used for his treatment will be available throughout the country for doctors to treat patients so if you can’t get them it’s most likely you have a Governor who suffers the visceral hatred of TDS.

The Democrats have used COVID-19 from day one as a political weapon and they’ve been aided in this by the MSM who are nothing more than a Propaganda Bullhorn for the Democrats. Disgusting.

If Joe Biden gets in then within ONE MONTH they will throw him overboard and say what everyone already knows that he’s got Senile Dementia and then Kamala Harris will be in, this is why I think Nancy Pelosi was going on about the 25th Amendment again the other day, they mean to use it against Biden.

The Democrats have used COVID-19 from day one as a political weapon and they’ve been aided in this by the MSM who are nothing more than a Propaganda Bullhorn for the Democrats. Disgusting.

Biden WILL be out within a few weeks (on whatever excuse) and Harris new President. That’s the plan.

I’m not sure if Trump really had Covid 19.

Asia (in China, Korea, and Japan)
Europe (initially in Italy)
and US (the most dangerous type)