Ross Perot Dead at the Age of 89

Ross Perot was a Patriot and a true American as it’s worth noting that he warned everyone about NAFTA and was proven right about a lot of things! He tried to save America from the clutches of the evil RINO establishment big club from the exploits by way of China and multi National corporations to no avail! When he ran for president he was systematically shut down in debates much like Ron Paul was as well as Bernie Sanders (to be fair with the latter mention) by the big establishment! He should be remembered as a man who knew what was happening but was silenced!

Self-made billionaire Ross Perot, who ran for president in 1992 and 1996, has died at age 89 after a five-month battle with leukemia, the Dallas Morning News reported.

Perot, who won 19 percent of the vote as a third-party candidate in 1992, died early Tuesday at his home in Dallas surrounded by his family, family spokesman James Fuller said.

As a boy in Texarkana, Texas, Perot delivered newspapers from the back of a pony. He earned his billions in a more modern way, however — by building Electronic Data Systems Corp., which helped other companies manage their computer networks.

Yet the most famous event in his career didn’t involve sales and earnings; he financed a private commando raid in 1979 to free two EDS employees who were being held in a prison in Iran. The tale was turned into a book and a movie.

Perot first became known to Americans outside of business circles by claiming that the U.S. government left behind hundreds of American soldiers who were missing or imprisoned at the end of the Vietnam War. Perot fanned the issue at home and discussed it privately with Vietnamese officials in the 1980s, angering the Reagan administration, which was formally negotiating with Vietnam’s government.

Perot’s wealth, fame and confident prescription for the nation’s economic ills propelled his 1992 campaign against President George H.W. Bush and Democratic challenger Bill Clinton. Some Republicans blamed him for Bush’s lost to Clinton as Perot garnered the largest percentage of votes for a third-party candidate since former President Theodore Roosevelt’s 1912 bid.

During the campaign, Perot spent $63.5 million of his own money and bought up 30-minute television spots. He used charts and graphs to make his points, summarizing them with a line that became a national catchphrase: “It’s just that simple.”

Perot’s second campaign four years later was far less successful. He was shut out of presidential debates when organizers said he lacked sufficient support. He got just 8% of the vote, and the Reform Party that he founded and hoped to build into a national political force began to fall apart. 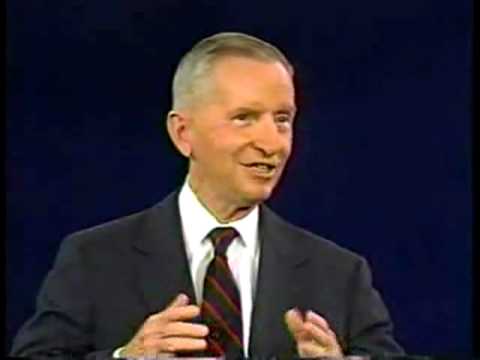 He lived a good life , he changed the political landscape, if it wasn’t for him entering the race, Bush 41 would have beaten Clinton.

The race would have been close.

RIP, Mr Perot. Loved your campaign in 92 and you got my vote.

I believe Perot was an honorable man.

Yep! He sure was! Today’s economy were all markings he predicted would happened!

That 2nd video was one of the best things I’ve ever seen. How did that man not win the election? He could have saved America!

He was doing great. But the Bush family was pulling out all the stops to ruin him. So Ross Perot said WTF and pulled out of the race for several months. Then he came back in. That is why he didnt win.

He got my vote too!

He pulled out for several months, but if he had hung in there he could have won!

He would have been a great president. The original Trump in many ways.

That 2nd video was one of the best things I’ve ever seen. How did that man not win the election? He could have saved America!

Probably because too many people are superficial and discounted him because he was a small man with a funny voice, just not presidential. Obviously Americans have since gotten over that…

He probably would have been a good president for America.

He would have been a great president. The original Trump in many ways.

Yes… without the sexual peccadillos.

He got my vote as well.

RIP to Ross Perot, fine man and a true American. As noted above, he predicted America’s future economic woes quite accurately.

Can you even imagine a man who would privately fund a commando raid to free his employees? I didn’t know that until reading that in this thread. Definitely a very fine man.

I’d like to read the book… Does anyone know what the name of it is?

Edit: I found it:

Funny, like many of my friends here, I too threw my vote away for Perot. I was protesting milquetoast Bush and his globalist crap.
My vote for Perot did not matter, back then I lived in a deep blue state.

Perot was so correct on NAFTA that it swamped his other quirks.

I don’t think he could have won but there’s a very good chance he’d have picked up close to 30% of the vote.

The Party Machines are just too powerful for a third party insurgent to win.

He got my vote the first time around but not the second.

Perot was like many geniuses, absolutely brilliant but he was also just a little bit nuts. His hatred for the Bush family was pathological.

I don’t think you threw your vote away! I too voted for him, and like you voting for someone who not only was correct in what he believed in, but with good conscience was a man who was putting his country first for the better welfare of its citizens. At the end of the day, you sleep better at night knowing what you voted for was morally right than voting for what is morally wrong, which sad to say was every politician that supported NAFTA and that followed after Perot.

I know you probably read the thread. Did you notice how many of our long-term friends also voted for Ross?
Interesting correlation.

Oddly he was prescient on the Bush family too.