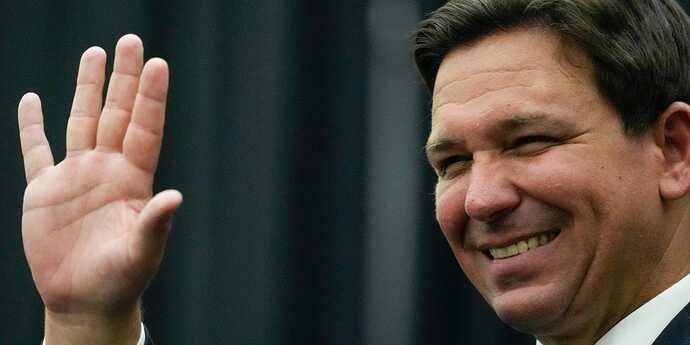 The lawsuit accuses DeSantis of improperly using the funds because the migrants didn't originate in Florida before they went to Martha's Vineyard.

Fascist liberals have nothing to do but to facilitate the destruction of the USA.

From that link
"Using a screenshot of state budget figures, the lawsuit shows the state spent $615,000 on transportation, as well as on Texas hotels and lodging, through an air charter company called Vertol Systems Company, Inc.

The company has ties to GOP Rep. Matt Gaetz of Florida and Florida’s safety coordinator Larry Keefe, who both represented Vertol in a civil lawsuit in 2017, NBC News reported.

The lawsuit shows a separate transaction of $950,000 to Vertol Systems, but it’s not clear where precisely those funds went."

slap their paws and bleat “Libz Libz Libz” while jacking off to videos of Ron and Don. Sad. But funny.

This is why Democrats can’t win elections… sad

This is why Democrats can’t win elections

WTF . are you awake yet ? What party is the President , Congress and now the Senate in ??? DUH

So you think they didn’t cheat?

Well i guess they found a way to win dumbass .

So you admit they cheated… how is that a win? Lol

So WHY has 85% of the republican party afraid to say that ? They are saying the election was FAIR !!! EXPLAIN DUMBASS ???

You watch to much cnn lol

Human beings should not be used as political pawns. Every person has intrinsic value and deserves to be treated with respect. However, sometimes it is necessary to make difficult decisions that have negative consequences in order to achieve a greater good. For example, if a politician believes that sacrificing some people’s rights will result in a better life for all, then they may choose to do so.

While it is not ideal to use people as political pawns, it can be necessary in some cases. It is up to the individual politician to decide whether or not the ends justify the means, and whether or not they are comfortable with the consequences of their actions.

Let me know when you get on the soapbox on the the billions of tax payers dollars being laundered in Ukraine instead of getting your panties twisted in a wad over a fraction of that amount on so called GOP perversity.