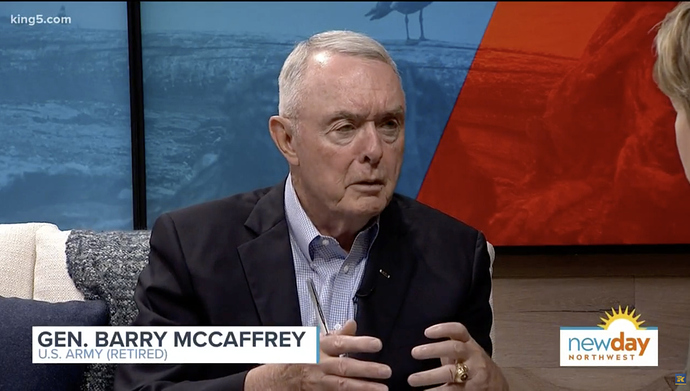 In a tweet, the former four-star general, now an NBC contributor, called the decision a “watershed moment in history.”

"The White House Trump statement telling the entire Federal Government to terminate subscriptions to the NYT and Wash Post is a watershed moment in national history,” McCaffrey said. “No room for HUMOROUS media coverage. This is deadly serious. This is Mussolini.”

Don’t we train these senior Army officers to be good stewards of the tax dollar? Cancelling subscriptions to those tabloids is something that people have been doing in increasing numbers all around the country. All Trump is doing is following a trend. Besides, how long has it been since either the WaPo or the NYT actually engaged in journalism and not just opinion pieces pandering to the far left or pushing an agenda?

This is hilarious! Two of the most prominent news papers severely suffering from TDS that post negative stuff about the president day in and day out and McCaffery is dumbstruck with such pearl clutching responses? Ha! They hang themselves on their own petard!

It’s also a massive savings to the taxpayer! Plus - the federal government isn’t supposed to show favoritism to one company over another. Why the Washington Post instead of the Washington Times?

Trump is running the government like he would a business. No return on investment? Nix it.

I agree with you. I am brand new to entrepreneurship and only have had my business for a couple of weeks, but it has shown me how much I’ve wasted in my personal life on crap I didn’t need. Trump is the Chief Executive of the United States, if he doesn’t want his agencies and departments spending money on newspaper subscriptions then I fully support his decision.

I agree with you. I am brand new to entrepreneurship and only have had my business for a couple of weeks, but it has shown me how much I’ve wasted in my personal life on crap I didn’t need.

Wow, good for you! I sincerely wish you the best. Lots of trials and tribulations but also a lot of personal victories to be had when you hang in there.

Uh oh, dear leader has been criticized again, time to demonize another general lol. This like so many of Trump’s impetuous and temper tantrum acts will be restored by the next president whether a republican or a democrat.

What an idiot. The only thing either of those two communist rags are useful for is lighting the dumpster fire that constitutes the American left.

Yeah really man! I too wish you nothing but success with your new venture! Just remember not to be defeated by failure but take each one as a lesson to go further, the harder you work the greater the reward!

Not subscribing to lying rags is fascist?