Republicans, Democrats at an Impasse on Border Wall as Shutdown Nears A short-term deal is under discussion as the impasse heats up

Why is this so hard. The left claims the do not want an open border. We have daily incursions with people arrested for crossing the border. The left has no answers, let’s fund a fence. Why bother??? It’s estimated that 11 million illegals cost 135 billion a year. Why is 5 billion to begin building a wall so difficult???

So here we are facing a shutdown which isn’t a bad idea as long as congress doesn’t get paid until this is resolved.

WASHINGTON—The charged politics around funding a wall along the southern border has both parties struggling to keep the government funded as the clock ticks toward a partial shutdown at week’s end.

With seven spending bills set to expire at 12:01 a.m. Saturday, Republicans and White House officials over the weekend discussed a two-week spending measure, aides said, which would push the fight into next year. But it wasn’t clear they would pursue that route, given that Democrats will gain more leverage when they take control of the House in January. Congressional Republicans are likely to take their cue from President Trump, who hasn’t signaled whether he would be open to a short-term extension.

Democrats, who aren’t eager to help the Republican president fulfill his signature campaign pledge in 2016, also said Mr. Trump’s boast at the White House last week that he would be “proud” to shut down the government over wall funding saddled him alone with the political blame if one occurs.

On Sunday, both sides made clear they saw little room for compromise on the wall, though that dynamic could change as the spending deadline approaches. 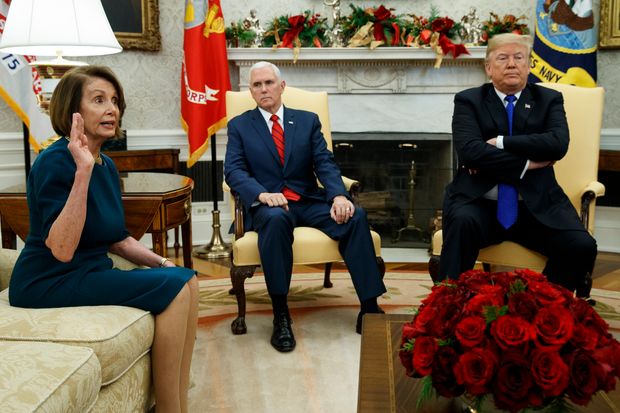 “President Trump should understand, there are not the votes for the wall in the House or the Senate. He is not going to get the wall in any form,” Sen. Chuck Schumer of New York, the chamber’s Democratic leader, said Sunday on NBC. “All he’s going to get, with his temper tantrum, is a shutdown. He will not get a wall.”

White House senior adviser Stephen Miller said the president was ready to shut down the government if Democrats refused to budge on funding.

“We’re going to do whatever is necessary to build the border wall to stop this ongoing crisis of illegal immigration,” Mr. Miller said on CBS. He said those steps could include a shutdown—“if it comes to it, absolutely.”

Federal agencies have been put on notice to begin planning for a shutdown, though a White House official emphasized Sunday that the step is normal procedure in the event of a potential funding lapse.

Republicans who had hoped to label any partial shutdown a “Schumer shutdown” backed off that line of attack after Tuesday’s White House meeting with Mr. Schumer and Rep. Nancy Pelosi (D., Calif.), who is likely to again be House speaker come January.

“There’s absolutely no excuse to shut down government on this issue or any other issue,” Sen. Susan Collins (R., Maine) said Sunday on ABC.

For each party, “the goal of pleasing the base is a huge impediment to getting a deal done,” said Greg Valliere, chief global strategist at Horizon Investments. “Trump feels, with some justification, that his base wants a very tough immigration policy and a wall. That’s a really enormous promise he made to his base.”

Meanwhile, Democrats, he said, “smell blood. They want to show their base how tough they are.”

GOP leaders had offered to spread $5 billion in proposed wall funding over two years, which Democrats have rejected. Democrats support border security but believe the wall is an ineffective use of funds.

At the White House on Tuesday, Democratic leaders proposed passing six less-controversial spending bills for funding the government, which would reflect lawmaker’s latest spending priorities, while extending current funding for the Department of Homeland Security, which oversees the border wall, through September. Alternatively, they said they were willing to extend current funding for all seven bills through the next fiscal year. Mr. Schumer and Mrs. Pelosi said Mr. Trump told them he would think about their proposals.

Both proposals would continue to permit Homeland Security to build new fencing and levee walls but bar the administration from building a solid concrete border wall.

If the government does shut down, its effects would likely be more limited than in previous shutdowns. Congress has already funded swaths of the government, including the Defense and Labor departments. Even for agencies that aren’t already funded, employees with essential jobs would report to work.

“Obviously we want to avoid a government shutdown, but if you look at what the real-world consequences would be, I think this shutdown would be different because we have funded most of the government,” said Rep. Richard Hudson (R., N.C.). “I don’t think the American people will feel an impact from this like they have in the past.”

Lawmakers and aides said a short-term dealthe weekend that nother short-term was a possibility that could grow more attractive as lawmakers grow antsy to return home for the holidays and as Mr. Trump’s planned vacation at his Mar-a-Lago resort in Florida beckons. Lawmakers had passed a two-week extension earlier this month.

Mrs. Pelosi is under particular pressure to resist agreeing to any funding for the border wall. Although she is expected to win a floor election to be speaker, she faces warnings from some House Democrats that they would defect were she to cede too much in negotiations with Mr. Trump.

Both parties were calculating how the political winds might shift in January if the government does shut down, or if lawmakers passed a short-term spending patch. Mrs. Pelosi said if the matter isn’t resolved by the time Democrats take the House majority in January, they would pass an extension of current funding and send that measure to the Senate.

“As soon as we took over the Congress, we would pass legislation to open up government and send it to the Senate, and we think it would then go to his desk. But we don’t have to go to that place,” she said Thursday.

Republicans believe Mrs. Pelosi would prefer to have the spending fight over and behind her by the time Democrats take control of the House.

In a shutdown, many federal employees would be required to work without a guarantee of pay, though Congress typically votes later to pay them retroactively. More than 420,000 federal employees, including 41,000 law-enforcement officials and up to 88% of the Homeland Security Department staff, would be working without pay, according to estimates from Senate Appropriations Committee Democratic staff. And more than 380,000 federal employees would be furloughed, including big chunks of the Commerce Department, National Park Service and the Forest Service.

The picture the NYT’s chose is beyond telling.

I don’t think there is gonna be a shutdown. They are going to pass a CR right at the last minute and kick the can down the road until January - which at that point - we will get a shutdown.

One thing that can be shown historically, is that Trump means what he says.

By having the meeting with Schumer and Pelosi, showing them begging to go off camera, and declaring that he would “own” the shutdown if it happens, he put all the blame squarely in their laps.

My best guess: The government will get shut down, Schumer, Pelosi, and the Dems will take the blame for it, Schumer will eventually cave, and Trump will come out looking like a winner.

Second most likely: The government will get shut down for weeks (possibly months), Schumer will take a ton of heat during that time, and eventually cave.

My guess is he won’t do anything, that he’ll sign whatever they send him. Then he’ll blame everybody else and pretend he’s building a wall.

Trumps best bet is to declare a national emergency and have the military build the wall.

My guess is he won’t do anything, that he’ll sign whatever they send him. Then he’ll blame everybody else and pretend he’s building a wall.

That says a hell of a lot about the urgency they think is justified where our border is concerned.

Yea… don’t mention that, or the fact that we could tax monies sent back to South American nations by 2% and pay for a wall 10x over in one year (as well as a good chunk of the welfare benefits those useless scumbags are sucking up).

America without a Federal Government would be like a cancer patient without cancer.

It’s estimated that 11 million illegals cost 135 billion a year. Why is 5 billion to begin building a wall so difficult???

We are much closer to 25 million ILLEGALS in our Country and the dems are more concerned with votes that keep them in office forever . You would be amazed at the number of people who would line up for free shit regardless of the value . We have lost the fight !!!

Actually the new estimate is 22 million however it may be as high as 40 million.

But what’s a few more poor indigent added to the taxpayers bill.

Simple answer Lou, what the left wants and what they claim are two completely different answers.

They will say or do whatever is necessary to achieve their desired aim…thinking most people have short memory…or worst preying on the meek.

If Trump thinks his base will back him for impeachment after this Bump Stock ban and caving on Wall funding… LOL.