Puerto Rico rioting after Governor Refuses to step down 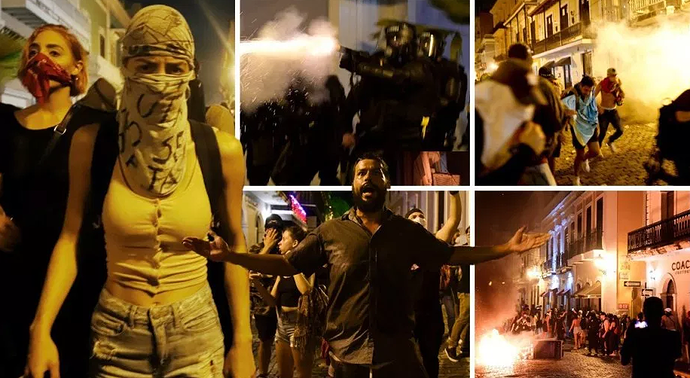 Remember that guy who stole all the money Trump sent after the hurricane and then blamed Trump? Well, apparently this Castizo has crossed a line.

Honestly, I just hope that the rioters burn the entire shithole to the ground.

San Juan, P.R. — Defying growing calls for his immediate resignation, Puerto Rico’s beleaguered Gov. Ricardo Rosselló on Tuesday vowed to remain in office and bring more transparency and accountability to the Puerto Rican government. In recent days, his office has been rocked by high-profile corruption arrests and escalating protests over the revelation of vulgar and inappropriate private messages between the governor and his staff.

A political crisis has swept the Caribbean island — home to approximately 3.2 million U.S. citizens — since a non-profit journalism group, Puerto Rico’s Center for Investigative Journalism, published a trove of messages in which Rosselló and his top lieutenants mocked political opponents, talked about retaliating against journalists and made sexist and homophobic remarks. The scandal prompted the resignation of several officials in the messaging group, including his secretary of state and chief financial officer, but the governor has tried to quell the fallout and save his political career.

During his first press conference since the crude messages were leaked, Rosselló said that after days of introspection, he had determined that it was in the best interest of the island for him to continue in his role.

“The unfortunate events of the past week in Puerto Rico prove the President’s concerns about mismanagement, politicization, and corruption have been valid,” White House spokesman Judd Deere said in a statement. “We remain committed to Puerto Rico’s recovery and steadfast in protecting taxpayers and the Puerto Rico survivors from political corruption and financial abuse.”

During the press conference, Rosselló, who has sparred with Mr. Trump repeatedly over Washington’s handling of recovery efforts in the aftermath of the devastation caused by hurricanes Irma and Maria in 2017, responded to the White House’s statement by saying corruption is a social “ill” rampant in both government and the private sector. He vowed to combat it during the remainder of his tenure.

Trump was right again. He called them out for being corrupt lowlifes and he got the typical response from them - racist.

Once again we can see that Trump was telling the truth and these people are completely corrupt.

They don’t deserve to be a territory of the United States.

Need to expel this country as a territory along with all of their “people” in the mainland.

Why are we giving this third-world shithole the benefits of American citizenship? It’s even more saddening that some cuckservatives support its inclusion into the Union.

Once again we can see that Trump was telling the truth and these people are completely corrupt.

They don’t deserve to be a territory of the United States.

Icelandic Water donated hundreds of bottles of their spring water and it sat there, in the dirt, exposed to the sun. For that monumental waste of beautiful natural resource alone, I hope they all die.

It really is interesting to see the long game being played out.

Liberals were up in arms about the relief efforts not going quickly enough. Nevermind, due to the corruption, the electrical grid was in shambles for years before the hurricane. Access to repair was a logistical nightmare…but hey nevermind the facts, right?

Now, the corrupt are being outed and dropping like flies.

This is a US Territory and that isn’t going to change. So, best to weed out the corruption and change the culture that has allowed it. I’d like Puerto Ricans to prosper. It is to their advantage to do so, and to ours as well.

How does corrupt leadership by a handful disqualify 3 1/4 million Americans from remaining US Citizens?

If that’s the bar the whole of the US will have to be disbanded as well.

Yes, blame the millions of people not responsible and wish death on them because of the incompetence of their leaders.

Can you imagine if … one of the democratic hopefuls wins 2020?

Would you or I or anyone fighting against what the party stands for… the millions who voted against it be condemned for those that did?

I think a lot of folks here would be happy if it happens and use it as an excuse to burn the whole country down.

Of course, they’ll be the keyboard commandos expecting others to do the fighting and suffering.