Pray for James Fields Jr - Guilty of All Charges

Fields, 21, an Ohio native, was charged with first-degree murder last year following the hit-and-run attack, which killed 32-year-old Heather Heyer and injured dozens other anti-racism protesters who ran counter to the “Unite the Right” rally. He was found guilty on that top charge.

All of this on top of the 30-count hate crime indictment brought against him by the Department of Justice.

The outcome comes after a highly anticipated two-week trial in Charlottesville, Virginia, which focused on Field’s intent to attend and inflict violence at the white supremacist rally, where hundreds of alt-right, white-nationalist, and neo-Nazi activists carrying tiki torches gathered to protect a statue of Confederate General Robert. E. Lee.

After three days of jury selection, Charlottesville Circuit Court Judge Richard E. Moore and a 12-person jury comprised of nine women and seven men (and notably only one person of color), heard from the prosecution and more than a dozen witnesses proving Field’s intent to cause harm during the rally.

Virginia Commonwealth’s Attorney Joseph Platania and Senior Assistant Commonwealth’s Attorney Nina-Alice Antony both argued that Fields, who brought a homemade shield, was being “given a hard time” by counter-protesters during the rally, prompting him to plow his gray Dodge Challenger through the crowd on the afternoon of Aug. 12, 2017.

A medical examiner ruled that Heyer was fatally injured by blunt-force trauma from the car’s impact.

“What was in his mind when he flew into the crowd?” Antony asked the jury in her closing arguments on Thursday, pointing to video revealed in court showing Fields idling at an intersection before backing up “slowly” and plowing into the crowd. “His intent was not to kill Heyer specifically, but to kill any member of the group.”

“He gets toward that group and he goes for them. What intent could he have other than to harm or kill?”

The prosecution also focused on gruesome and detailed testimony from Field’s victims, who spoke about their permanent injuries and described the moment the car hit the crowd.

“I heard screaming, very loud thumps, and saw bodies in the air. I was sure this would be my last second, and I was pretty frustrated that that’s how my last second would be,” said Thomas Baker, who tore several ligaments and broke his hip in multiple places from the attack.

Field’s defense lawyers, John Hill and Denise Lunsford and former Albemarle County commonwealth’s attorney, on the other hand, evoked a simple defense: the 21-year-old was acting out of self-defense.

“You’re here to decide why this event took place,” Hill told the jury in his opening statement. “Was Mr. Fields in fear of serious bodily injury or death?”

This lawyers argue that Fields—who has been diagnosed with and receiving treatment for ADHD, anxiety, depression, and bipolar disorder—was afraid for his life after witnessing earlier violence between the white nationalists and counter-protesters. He reacted, his lawyers alleged, without thinking of the consequences.

Fields notably did not testify on his own behalf, but was present every day of the trial. He often appeared emotionless, according to reporters.

Charlottesville Deputy Sheriff Paul Critzer told jurors on Tuesday that after chasing and apprehending Fields in his car immediately following the incident, the white nationalist apologized for the attack and said he thought he was being targeted.

"I’m sorry for, for… I don’t know. I didn’t want to hurt people, but I thought they were attacking me. Even if they were attacking me, they’re still people,” Fields said, according to body-cam footage revealed in court. Police say Fields later started to sob and hyperventilate during an interrogation when he learned he had killed someone and hurt many more.

“Are they OK?” Fields tearfully asked a police officer in the video played in court. According to reporters in the room, as the video was being played, Fields looked down at the defense table, stabbing at it with a pencil.

Despite his eventual remorse, jurors learned on Tuesday that Fields sent his mother a picture of Adolf Hitler and a threatening text message as he was driving from Maumee, Ohio to attend the rally. Fields has been previously linked to white supremacy, as former classmates revealed his affinity for the Nazi leader.

“We’re not the one [sic] who need to be careful,” he wrote, which prosecutors argued showed his plans to engage in violence before he even arrived.

The text messages were revealed despite multiple attempts by the defense team to block them. The messages, they argued, would portray Fields in an unfair light since it does not show his intent at the exact time of the attack. Judge Moore, however, ruled that the messages would help the jury understand what motivated Fields throughout the day.

President Donald Trump, who was notably silent during the immediate aftermath of the protest, eventually blamed both sides for the violence during the Charlottesville rally, including Fields’ deadly attack.

Sentencing will begin Monday morning, the judge said in court, and could include witnesses into Tuesday. If given the maximum sentence for each charge, Fields could face as many as six life sentences and an additional 70 years in prison.

Talk about “justice” working. Heather Heyer died of natural causes related to her obesity. Fields was chased at gunpoint by an armed member of Antifa who even testified.

Oh and the fact that this was all a set-up to begin with should also raise some eyebrows. 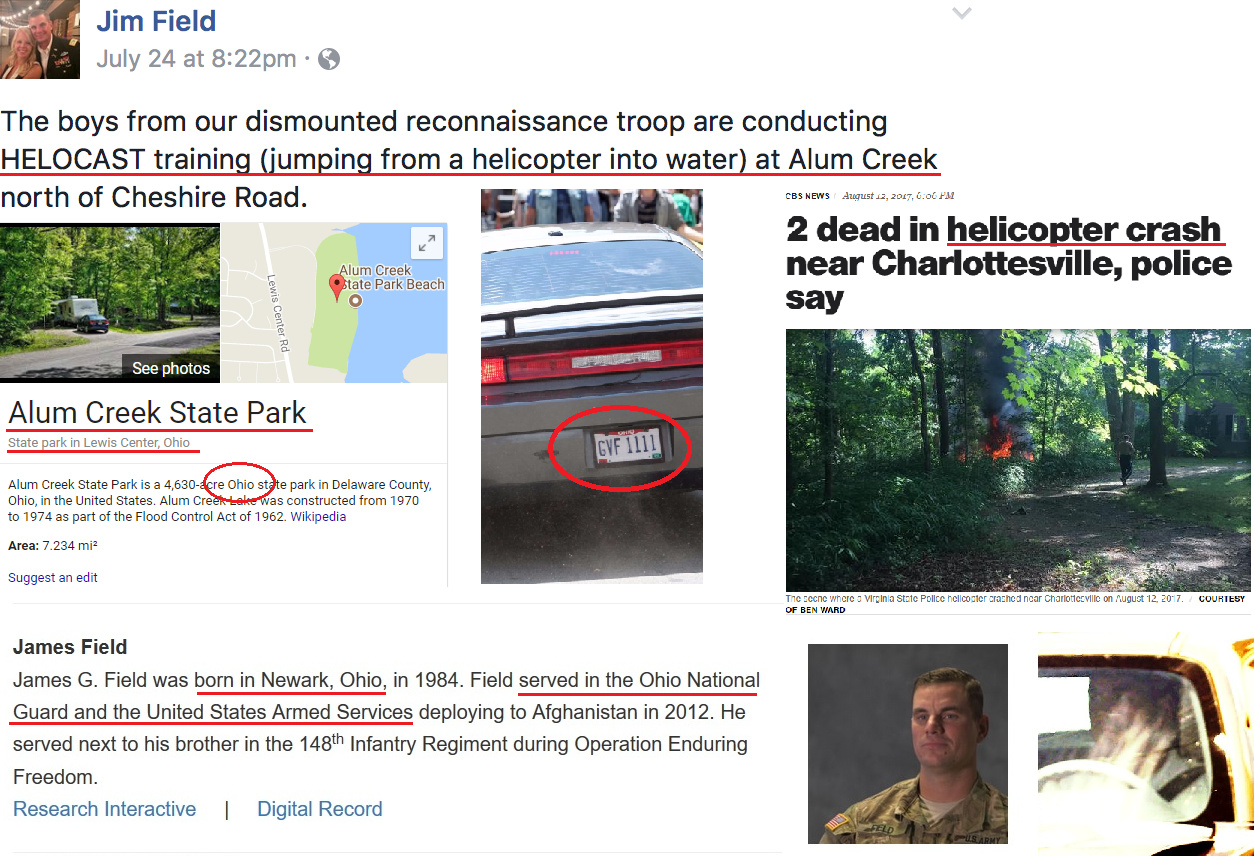 The poor lady died from blunt force trauma to the chest. I’m leaving her to Rest in Peace and not praying for anyone.

We’ve known for months now that the woman who was “killed” died from a heart attack and wasn’t even hit from the car, as the autopsy revealed.

Fields is being made an example of from the establishment. A deterrent saying that by not being a leftist, you lost any hope of justice.

She wasn’t hit by the car at all.

At :38 in the video below we can see Heather Heyer to the right of Fields’ Challenger:

Too bad he didn’t clip more of them. The police let these assholes walk around wearing masks and carrying weapons. Try pulling that at any “peaceful” protest.

All the evidence pointing to Fields being innocent will be memoryholed. How the incident played out is different from the revisionist history that reshaped it as an act of violent hatred. The majority of people will now see him as a “Nazi murderer”.

The poor lady died from blunt force trauma to the chest.

She died from being a land whale and crushing her torso with her own weight. She wasn’t hit by the vehicle. The fat slob fell over. The end.

Drive a rented u-Haul through an area filled with pedestrians, shouting Allahu Ackbar

Don’t be an Islamophobe, they’re fleeing for their lives!