A spokesperson for the transportation agency said Monday the case had been referred to the NYPD.

“Hate has no place in the transit system and we work hard to make the subway a welcoming, safe environment for everyone. We referred this to NYPD which responded to investigate, our maintenance teams got the posters cleaned and we will have them replaced with new ones if necessary,” MTA spokesperson Shams Tarek said in a statement.

A total of six posters were defaced, according to the MTA.

Hate begets hate, so I have no sympathies for this virtue signaling traitor! In fact I hope she faces more blowback for her disgraceful display on the international stage disrespecting America! So tired of these morons!

What would please me greatly is an American Flag sticker being placed over her face on every image of her that is made public.

Just carry a stash of American Flag stickers and place one on each image of her face.

Just carry a stash of American Flag stickers and place one on each image of her face.

A roll of those “I Voted” stickers would work well for that.

What a great role model for young girls. 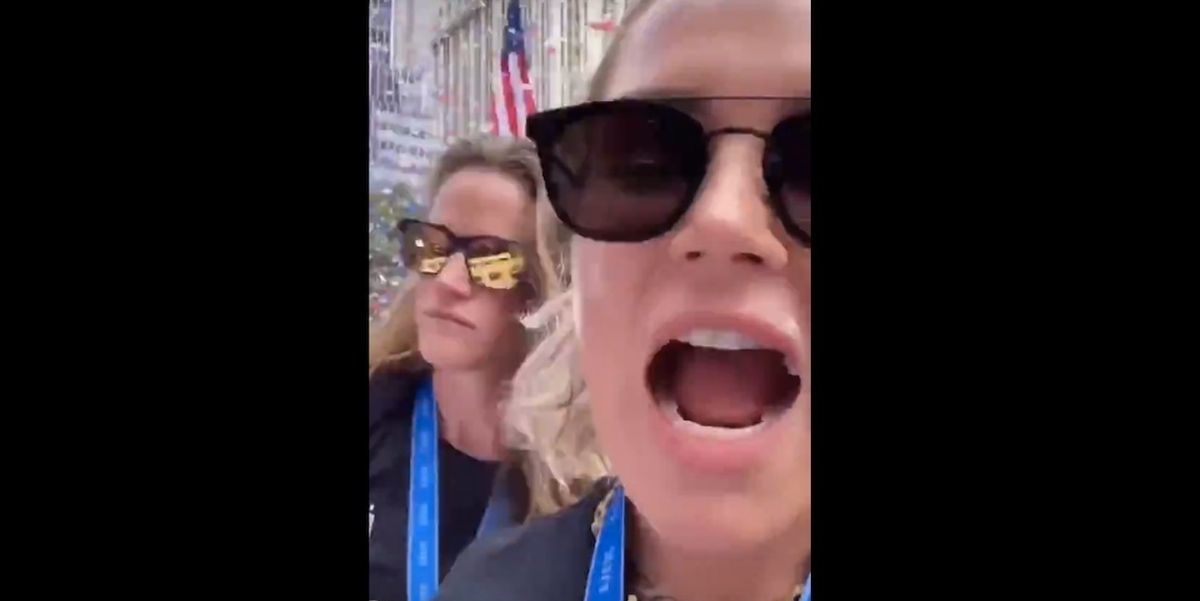 US women's soccer player on video at NYC parade: 'Hide your kids, hide your...

This bitch that claimed Trump wanted the White House visit to make a statement about himself now has made the whole celebration of a TEAM VICTORY nothing more than a platform for her disrespect-of-America agenda…her disrespect of the very thing that enabled her to become a sports star.

Just like the idiot, AOC, she’s let her undeserved (and temporary) popularity swell her head.

I say “undeserved” popularity in regard to the disrespect of the flag and the anthem, not related to her efforts in winning the World Cup.

What a great role model for young girls.

I think these women succeed on the field because they are tougher, meaner, nastier, than the other teams. Being tougher is one of the things it takes to win. I have no doubt pro football players are like that on the field. Hoopsters the same on the court. Pete Rose was “Charlie Hustle” because he was like that on the diamond. And it’s not new. “Nice Guys Finish Last” (Leo Durocher) examines that throughout the history of baseball.

I want that in whatever team I follow – and that includes our military (and that’s why I am pissed at efforts to “transform” them into a kinder, gentler force.)

But almost universally we want that to stay on the field. We don’t want the “bad boy” in these players to leak out when they are off the field. And so we eschew the sports hero who has multiple arrests, or who can’t control his physicality when it comes to interacting with his family or friends. Tough guy has a tough-guy hobby raising fighting dogs or roosters? He’s mud in the eyes of society, and rightly so.

A new “woke” underbelly of society – bolstered and feted by “woke” media and “woke” politicians – embraces and extols these celebrities who spew vulgarity and hatred. It’s the “right” hatred, after all. SJW-approved hatred. Anti-righteousness hatred. Hatred borne of rebelliousness. And they ARE elevated as the new role models.

This will not end well for our society.

This thread is a perfect example of Americans losing their minds when their shit country is criticized, even by other Americans.

I think we have seen plenty of this now and are not as receptive to the message as Obama was.

If you are looking for someone to bend over… look in the mirror.

That is merely your opinion and in no way shows evidence of any Americans “losing their minds” when the USA is criticized. We criticize ourselves quite often.

For my edification, what shit country do you call home?

For my edification, what shit country do you call home?

She was already caught in a lie by her third post on the board.

Don’t expect a truthful answer to that question.

Uh huh! Sounds like your repeating your other pseudo personality from the other thread!

This thread is a perfect example of Americans losing their minds when their shit country is criticized,

And that’s a perfect example of over the top exaggeration. America has problems to be sure, many self inflicted, and you could probably engage people in discussions on that. But America is not a “shit country”, and you will get nowhere with that colossal approach.

When I read the comment in various stereotypical accents I decided the lack of an sentence enhancer in the midst of “their minds” ruled out angry Australian or angry Scot.