This feature gives users the capability to communicate securely through Political Bullpen, by using an end-to-end encryption scheme. Most of this feature’s logic is implemented on the client-side and the server-side handles only public or encrypted information. It does not encrypt any post metadata, such as names of participants in the conversation, posted time, likes, small actions, etc; uploads are encrypted, but their presence is not because the system must associate uploads with posts to prevent deleting them.

The whole code is open-source and security enthusiasts are welcome to review it. For any further information, do not hesitate to contact me - via encrypted message

Three easy steps to use this feature:

The goal of this feature is to offer integrity and confidentiality of the encrypted contents, and to protect it against information leaks and unauthorized users. The following sections describe the usual operation mode, used algorithms and threat models.

To use this system, users enroll once by generating a “user identity” consisting of two 4096-bits RSA keys, one for encryption and another for signing. Users can export their “identity” for safe keeping or store it on the server, encrypted after generating a paper key. These two methods serve as backups or are used to enroll new devices.

To create a new post, the user (their browser) will:

Paper keys (inspired by RFC 1751 and BIP-39) are human-readable keys that are used to securely store the “user identity” on the server. A paper key consists of 12 random words, picked from a list of 2048 words, offering 121-bits of entropy (the first word is used as a label). To encrypt the “user identity” with a paper key, the system will first derive the encryption key using PBKDF2 to stretch the paper key into a 256-bit AES-GCM key. 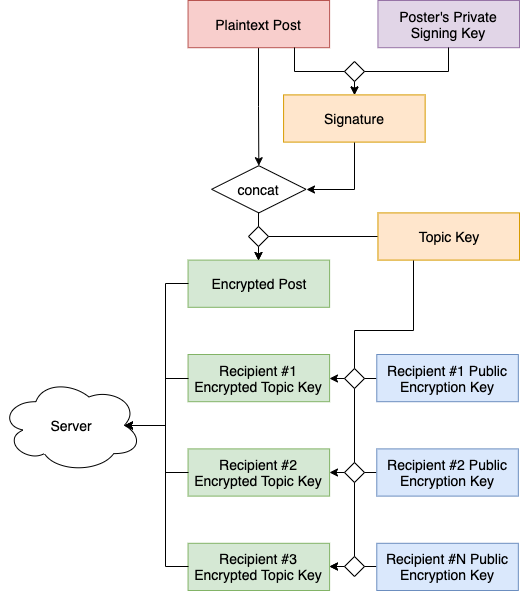 To read a post, the user (their browser) will:

This feature makes extensive use of the cryptographic primitives implemented in Web Crypto API , which are available in any modern browser (except Internet Explorer).

The system uses a set of primitives built on top of those provided by the browser via Web Cryptography API .

An attacker which can inject code could in theory access encrypted information by serving malicious code, which decrypts the encrypted content and sends the plaintext posts to another server. To make this possible, it is enough to have access to an administrator account and create a theme component with the malicious code - this would be impossible to do unless you were the site admin.

Default protection mechanisms such as CSP are in place can detect and mitigate Cross Site Scripting (XSS) attacks that could also represent a way of injecting malicious code.

In Man-in-the-Middle attacks, the attacker intercepts the communication between the user and server, giving them the ability to read or alter it. Because this feature encrypts everything before sending, an attacker cannot decrypt anything by simply eavesdropping. Similarly, because information is authenticated the attacker cannot alter it.

However, the attacker could serve malicious code back to the user and follow a similar attack to the one presented in the previous section. This is partially mitigated by HTTPS, which is considerably reducing the attack probability.