Pelosi Chickens Out on Impeachment Vote

Just as I and many others predicted, that in order for impeachment to go forward there would have to be legal jury prudence involved by notifying the DOJ of serious violations to remove a duly elected sitting president. This was nothing but political theater and a made up charge by the Democrats where the calculus of risk was weighed in to make them think twice where this was heading. It was a no win situation for the Democrats and they know it. How about the other liberals here? Are they someone who are licking their wounds, and wiping the egg off their faces? Probably. One thing is for certain, if they are not woke to understand that they too will face being on the wrong side history by not understanding or better yet siding with ANITFA, then they too will become a lost cause at some point, and their incessant crying isn’t going to change the outcome! 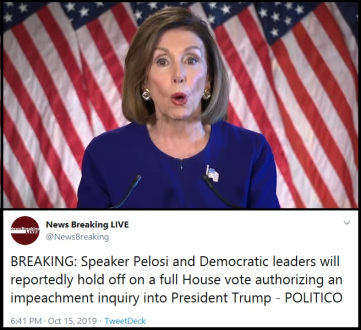 According to Capitol Hill members, via Politico, House Democrat leadership has taken a climate assessment of democrat House members and Speaker Pelosi announced they will not hold a House impeachme…