Our missles at work 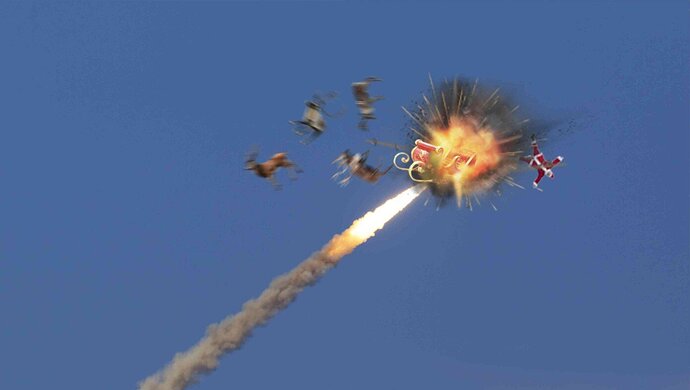 KYIV — Somber news came out of war-torn Ukraine today as reports confirmed Santa Claus’s sleigh had been mistaken for a hostile Russian aircraft and was shot down by a Ukrainian surface-to-air missile as it flew over the greater Kyiv area early this morning.

It has long been suspected that Santa Claus frequently makes test flights over this region in the days leading up to Christmas, but there have been reports of Ukrainian military personnel being overly eager to try out their new missiles provided by the United States.

“One of our reconnaissance teams observed something unidentifiable on the radar this morning,” said Ukrainian military spokesperson Grigor Grigorovic at a media briefing. “We attempted multiple times to communicate with the aircraft and received no response. We very clearly warned the aircraft that we would open fire if it remained in restricted Ukrainian airspace. We did what we had to do. This tragedy is not on us. The blood of Santa Claus is on his own head.”

Wreckage believed to be remnants of Santa’s sleigh was found in a nearby village, though there has been no sign of Santa himself. The public is holding out hope that he has somehow survived and will still be well enough to carry on his Christmas work over the weekend.

At publishing time, the White House offered no comment on any involvement of the United States in the incident, though the Biden administration was already aware of Ukrainian President Volodymyr Zelensky already requesting another Patriot missile to replace the one used to destroy Santa’s sleigh.