On Public Displays of Religious Symbols 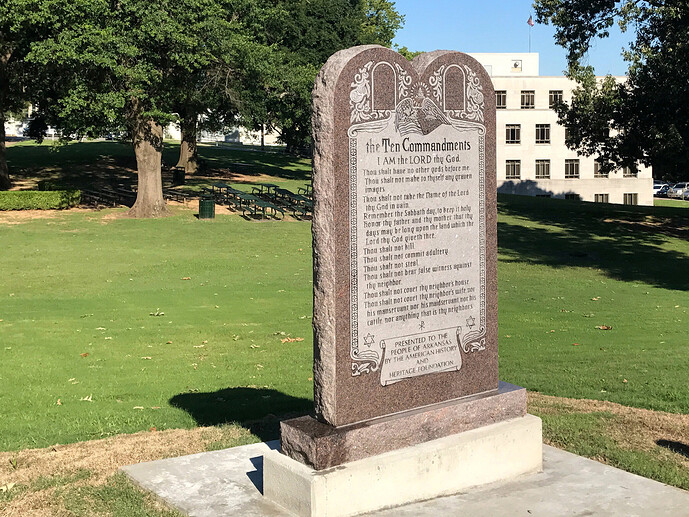 I hear the discussion over the public display of the Ten Commandments, a ■■■■■■ and Christian religious symbol. I don’t understand the issue, either from a religious or a secular point of view.
I realize this argument, posed as religion stemming the tide of secularism really does not have a secular point, but what is the religious point? If putting a statue of the Ten Commandments on the court house lawn, or posting a copy of them in the hallways of our schools would improve the morality of our nation I don’t think there would be a discussion and these monuments would have been installed years ago. Religious structures have no power to improve morality. Count the churches in our cities and towns and ask yourself if they have succeeded in making us a moral nation.

Do we need public displays of the Ten Commandments to remind us of the ■■■■■■ origin of our laws? Why? Our existing legal structure has long since left the simplicity of these few words in the dust. The Code of Hammurabi, the Constitution of Solon, the Doomsday Book of William the Conqueror, English Common Law, and The Constitution of the United States of America each have had as much impact on our legal system as The Ten Commandments.

Posting the Ten Commandments in the town square will not make us a holier nation. They will not make us love God one bit more or less than we do now. If we are intent on following Jesus, or loving God, we will do it without benefit of stone reminders. More than once God tells us He takes no delight in our external signs of piety, He cares about how we treat each other. External piety in the face of starvation, oppression, corruption, arrogance, usury and theft is an abomination in God’s sight. Are we to plaster the Ten Commandments throughout the land in an attempt to cover the stench of corruption from our churches and our institutions? Is God so small that we can blind Him to our real failure by a few stone carvings? Can our piety suffice for our lack of internal rectitude? I am reminded of the days of Jeremiah. With Jerusalem surrounded and on the verge of destruction the false prophets told the rulers to continue worshipping idols and all will be well. This is the situation we as a country find ourselves in now, continue in our idolatry and all will be well. Many of the churches in our country have turned the Bible, The Ten Commandments, and some political issues into objects of worship and forgotten that God alone, not these things, these works of human hands, is worthy of worship.

Essentially meaningless issues such as homosexuality, gay marriage, abortion, Creationism and Intelligent Design stir the pot causing us to ignore the real immoralities of our day. They ratchet up the volume of discord drowning out the more important moral issues of how we treat one another. I am reminded of the Good Samaritan who looked after the injured stranger while the pious avoided him precisely because of his injuries. The pious concentrate on the unclean while the wounds go untreated.

Our nation is being stolen from us by degrees through a usurious banking system, war profiteering is an official policy of our government as is the systematic destruction of the middle class, the public school system, our economy, and our social safety net. Our government ignores the poor and the widowed while engaging in the largest redistribution of income in its history. Those who seek power in the name of God condone and even support these policies. They have sold their souls for power, creating idols and forgetting God. We are like Jerusalem, surrounded by our enemies, worshipping false gods, arrogant in our power, and rotten to the core.

The fight over public displays of religious symbols has become a fight over whether God wants a holy, moral people committed to Him and to each other, or an idolatrous nation worshiping the images of God, rather than God Himself. God tells us He will write His laws on our hearts. If indeed, His law is in our heart He will know this by our actions and commitments, not by an idolatrous stone altar on the courthouse lawn.

I can’t see anything that’s fair and constitutional than to either allow anyone to put up whatever they want, or kick it all out.

Since I’d rather not have my public spaces filled with heaps of tacky junk, I’d say keep it all out. Yes, that means tinsel-covered trees in the public square as well as giant carved rocks in the courthouse.

When these issues come up, as they routinely do, it is not an issue of putting out NEW monuments of the ten commandments, but rather REMOVING the already existing monuments. Here’s a question…if the monuments are so “insignificant,” and have no impact on changing anyone’s mind about anything, then why does it matter if they’re there? Your argument is that their presence is insignificant in the grand scheme of things, but you contradict yourself in that argument by lobbying for them not to be there in the first place. This entire issue is a blatant move to stir up trouble between religious groups, not unlike the redundant “Merry Christmas, Happy Holiday” issue being played out now…as it has been for the past decade or two.