Hard to believe this story hasn’t been making huge news worldwide and especially here in the US.

MOSCOW — In online posts and calls to local officials, Russians on Monday expressed anger that the explosion of a small nuclear reactor at a military test site last week has gone unacknowledged for days by their government.

“Even if it is not as dangerous as it seems, we deserve to know,” said Danil Kotsyubinsky, a resident of St. Petersburg who has been pressing local officials for information.

The accident, which has been cloaked in secrecy, took place on Thursday at the Nenoska naval weapons range on the coast of the White Sea in northern Russia, and it apparently involved a test of a new type of cruise missile propelled by nuclear power, American analysts say.

The explosion killed at least seven people, released radiation that briefly elevated readings in a city 25 miles away and set off a scramble by Western experts to ascertain what happened. The military and a state nuclear energy company announced the deaths but few details of the accident. 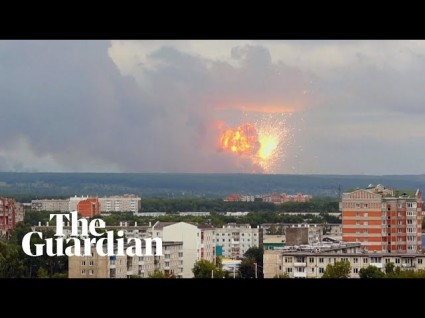 What Happened With The Nuclear Explosion In Russia Last Week?

“Even if it is not as dangerous as it seems, we deserve to know,” said Danil Kotsyubinsky, a resident of St. Petersburg who has been pressing local officials for information.

Seems they were playing with a new cruise missile warhead and it didn’t work out too well for anyone in the vicinity.

I wonder if we’ll ever get the full story on this or if Putin will bury it.

Odd that our own gov’t isn’t making more noise about it.

I hate when that happens.

Didn’t bother the guys/gals in the blast zone at all.

I was actually wondering about this too! Anytime Nuclear fall out and Russians are involved nothing good ever comes from it! Chernobyl rings a bell in which is still a mystery to this day!

Most people don’t realize it’s also continuing to poison the environment and the Russians are still clueless as to how to build a containment vessel that will finally enclose it permanently.

One of their biggest problems is that concrete will not last long enough to contain it permanently as even without that kind of heat all concrete eventually turns to dust and rubble.

This one is particularly alarming since it was wither a nuclear warhead or perhaps a small reactor to go in their new global nuclear cruise missile from what I’m reading.

A reactor that small would be inherently dangerous and would almost have to be a fission reactor and there’s no way to build a small enough containment vessel to contain an uncontrolled chain reaction.

Were there any North Korean engineers involved???

No and that’s the scary part, the Russians are far more capable than the North Koreans.

You’d think they’d have learned something after Chernobyl. Which you are correct, is still killing people. I think I read that the sarcophagus is discentigrating…

Between the heat and radiation the concrete is decaying rapidly.

Unless they can figure out some way to either recover it or encase it in some sort of ceramic/concrete combination this is going to continue burning for about 10,000 years.

Once humanity is finally erased from the planet, the Earth will clean itself up toot sweet. Just a few million years in geologic time is all it will take; and once again there will be a pristine planet. We are so arrogant to believe we are actually in control. We cannot even control the moment. I will say the use of logic could give us a very slight edge; but more often than not, emotions override logic. To say emotions are wrong would be silly; but there must be a balance when dealing with hard reality.