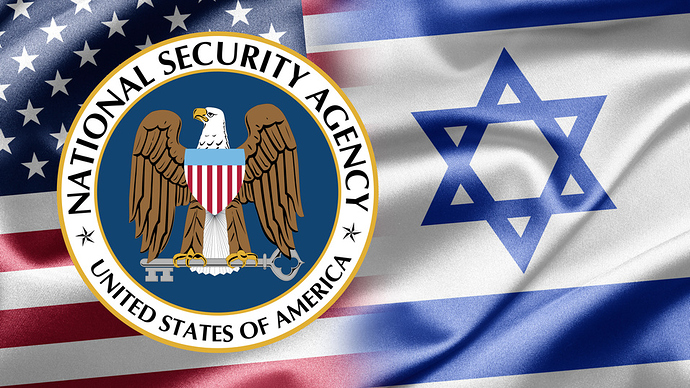 It’s fair enough for the NSA to run a global spy network and then feed Israel information so they can carry out targeted assassinations. And to give them all of the private data collected on all American citizens through their massive illegal spy network.

Because, after all: the Holocaust.

Frustrated by a legal ban on sharing intelligence with Israeli operatives conducting targeted assassinations against Hezbollah, the NSA crafted a loophole giving them total access even to US citizens’ data, leaked documents show.

The Israeli SIGINT National Unit (ISNU), the NSA’s counterpart in Tel Aviv, convinced the Americans to circumvent the legal prohibition on providing surveillance data for targeted assassinations during Israel’s 2006 war with Lebanon, according to the newest revelation from the archives obtained by whistleblower Edward Snowden.

I wonder why the NSA would be frustrated that they’re not allowed to give assassination dox info to Israel?

Using the familiar rationale of “terrorism” to excuse cooperation they knew was illegal, the NSA and ISNU found a workaround using the Office of the Director of National Intelligence that provided the Israelis with all the intel they needed, according to an October 2006 article in the NSA’s internal publication.

“To ISNU, this prohibition [on sharing data for targeted killings] was contrary not only to supporting Israel in its fight against Hizballah but overall, to support the US Global War on Terrorism,” said an article in SIDToday.

Its author, whose name is redacted, details the “late-night, sometimes tense discussions” he had with ISNU officials who believed they deserved an exemption from the US prohibition on abetting targeted killings.

The documents don’t include details of what “arrangement” was eventually worked out with the ODNI, but the Israeli military used American data to lay waste to Lebanon’s civilian population, much like the tech-enhanced US troops in Afghanistan and Iraq, whose kill-counts swelled with civilian victims after they received access to NSA targeting data.

Apparently unsatisfied with the legal loophole the Americans had created for them, the Israelis sought and received full access to the NSA’s massive surveillance data troves after the war. A 2009 memorandum of understanding officially gave ISNU unrestricted access to the NSA’s raw intelligence data – including the phone and internet records of American citizens and citizens of third-party countries. Only American officials’ data was excluded, on an honor-system basis (with ISNU instructed to “destroy upon recognition” any records originating with a government official). Almost no strings were attached to this bonanza – the Israelis could even release the identities of Americans whose information had been scooped up in the dragnet, as long as they asked the NSA for permission first, and could pass the data on to anyone at all if the names were redacted.

This is a lot worse than what Glenn Greenwald was talking about a couple of weeks ago, when he said the US is not being responsible with the information they turn over to Israel.

The one James Clapper lied to Congress about and was never charged for doing so.

They also spy on the entire world, collecting all of everyone’s communications.

It is all just being handed over, wholesale, to the ■■■■■

The media appears to not think this is a very important story.

No mainstream media outlet is covering it. 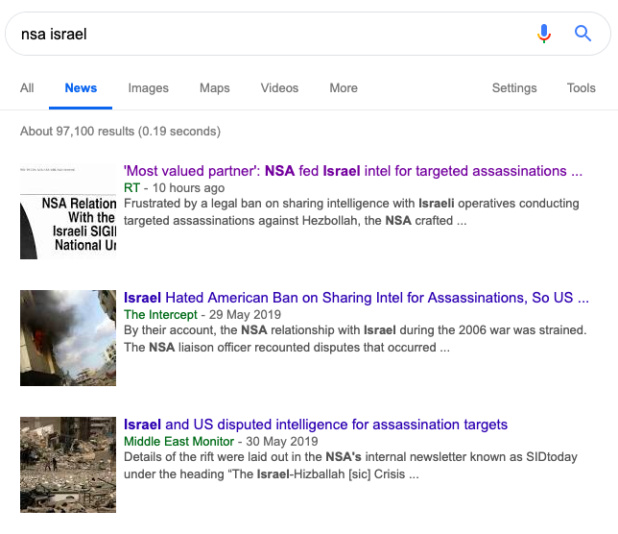 So, imagine for a minute if the mainstream media gets its way, and everything other than their own content is banned from the internet - which is what they are already effectively calling for.

This information could conceivably be leaked, and no one would even know about it.

Even right now, very few people are going to hear that all of this massive spy data is being directly handed over to the ■■■■■ Because most people probably think RT is Russian propaganda and probably don’t even know what The Intercept is.

Also note that all three outlets put the issue of helping them do targeted assassinations in Lebanon in the headline, rather than the much more egregious offense of handing over the private data of hundreds of millions of American citizens to a foreign country. At least with the assassination data, that is a situation where the US and Israel are military allies and they’re helping them with a war effort.

By why on earth would they be giving over all the private data of American citizens to this foreign country?

This is certainly problematic…

The US is indeed a colony of Israel as were the Banana Republics for Spain and Portugal centuries back.
Sorry for hurting some feelings, folks, but that’s the truth

This is seriously insane. Our government shouldn’t be handing out information on America citizens to ANY foreign government for any reason.

More BS from Putin and his cronies. Congrats on becoming one of Putin’s volunteers.

There is a World Wide Web

There is a Dark Web

And apparently, there is a Bat Shit Crazy Web which is where stories like these come from

In cases like these they are coming straight out of the FSB media office.

So maybe you and a few others here will soon have an “accident” that Israel orchestrates?

The US is indeed a colony of Israel as were the Banana Republics for Spain and Portugal centuries back.
Sorry for hurting some feelings, folks, but that’s the truth

Cool… I like Netanyahu.
And hanging with my Ashkenazi friends is gonna be great since we all have high IQs.

Thanks for letting me know.

Tell the same lie often enough and people will begin to believe it’s true. These people live on a diet of pure poison and hate.

In a just world, every person still living who either helped or is still helping the NSA carry out surveillance would be given lifetime sentences in maximum security prison, at the bare minimum. Both the harvesting of American’s data and the sharing thereof with foreign actors are treasonous behaviors.

Short of a miracle happening where Americans suddenly start demanding in mass that the NSA be abolished, I don’t see this coming to an end through any means except war and the destruction of the NSA’s and Mossad’s infrastructure.

Influential Senator Warned in 1975: “Th[e National Security Agency’s] Capability At Any Time Could Be Turned Around On The American People, And No American Would Have Any Privacy Left …There Would Be No Place To Hide. [If A Dictator Ever Took Over, The N.S.A.] Could Enable It To Impose Total Tyranny, And There Would Be No Way To Fight Back”

Hmm…I guess you didn’t click any of the links in the OP. They have the actual NSA classified documents that validate the OP.

Nothing can be validated to the blind absolute Israel supporter.

Point on the doll where NSA touched you.

It’s quite odd isn’t it. They get angry when someone calls out that highly sensitive intelligence information, which is illegally being collected on all US citizens, is then openly shared with a foreign country because they were trying to get around a legal loophole that would allow Mossad to carry out targeted assassinations.

That’s because you aren’t supposed to notice things. When you do they need to shut it down. 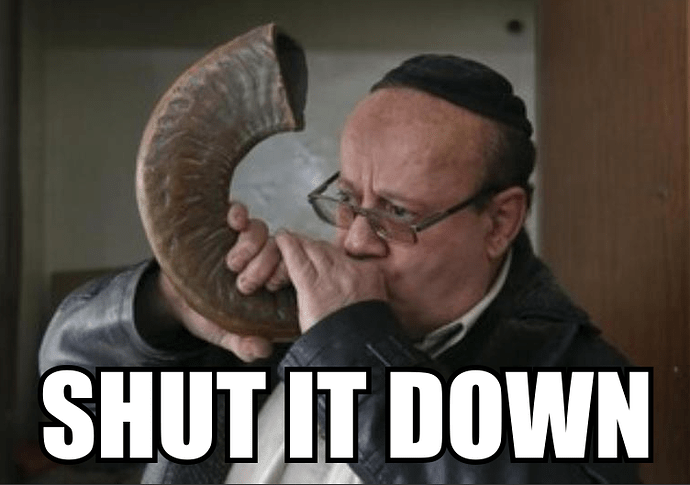 It really takes away from the discussion of serious issues that every single American should be pissed off about.

I have noticed that they all seem to log on and start posting shortly after anything critical of Israel is posted.

That’s because you aren’t supposed to notice things. When you do they need to shut it down.

I don’t even understand why criticism of Israel on any level is off limits. Is anybody really above criticism???

Blind loyalty is a trademark of many…