Now That The MidTerms Have Passed

Leaders of many of the most powerful conservative organizations in the United States signed this Conservative Action Project Memo to the Movement, entitled “America’s National Sovereignty Threatened: Congress Must Fund a Wall that Secures our Southern Border.”

It’s really too bad they couldn’t come to this conclusion when we controlled the house in the Senate. They are probably only saying this now because they know there is no chance in hell of building a wall.

Conservatives only make up about 40% of the republican caucus in DC.

Many republicans pretend they are conservatives to get elected and reelected and so to be informed, educated voters we need to look at their actual records not just their words.

Yes and whether we are speaking of Republicans or Conservatives most are of considerable disappointment to the Constitution and its founding principles.

We MUST also have an END to DACA and changes in our immigration policy . And an end to sanctuary Cities .

The only way you’re going to seen an end to DACA is with some percentage of them getting a pathway to citizenship. That battle has been lost so it’s time to figure out how to best manage and mitigate the damage.

One way or another Trump will sign a DACA bill and probably in exchange for some BS promise on border security without a wall.

Either republicans have just undergone an epiphany …

Near misses in too many states, especially Texas and Florida. Lost either one of those and never win a presidential election ever again. 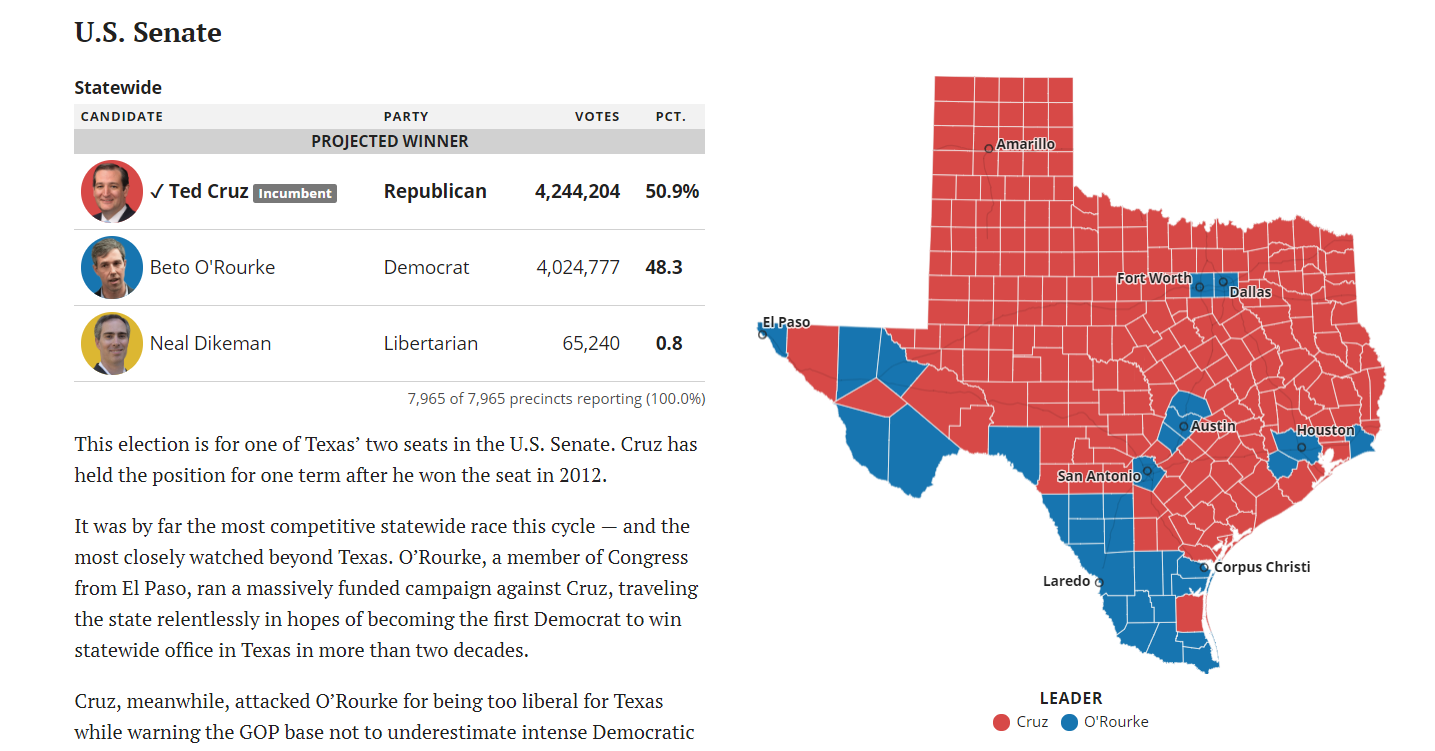 Beta was a one shot anomaly I wouldn’t put too much concern into it.

Democrats spent over a hundred million dollars trying to beat Cruz and had almost all of the state and national media working for them and still couldn’t get it done.

What they have accomplished is to leave their coffers pretty bare and a lot of their potential future donors broke with 2020 really just around the corner.

Now that Beta has been exposed as a phony “latino” he’d have a hard time winning a race for dog catcher outside of his home district.

I still don’t like that margin between Beto and Cruz - that’s way too close for Texas.

With a lot of districts reporting more votes than legally registered voters I suspect a whole lot of shenanigans.

I haven’t seen anything on what percentage of the provisional ballots ended up being counted.

Beta was a one shot anomaly I wouldn’t put too much concern into it.

I never said he’d given up. I doubt however after being exposed he could win a race for dog catcher outside of his own district.

With Obama’s inherent dislike of whites I really doubt he’s going to get behind Beta for anything.

Remember too that due to early voting and absentee voting a big portion of the vote was in before he was exposed and the wheels came off in the last three weeks.

Never forget Obama… While it was Chicago style politics, he had a lot of aid getting into the senate and became a wonderboy for the presidency… I rule nothing out as politics, while it has always been a blood sport, is different since Obamas ascendancy. As far as voting irregularities go, I don’t see the US getting a handle on this problem before a significant number of democrats are gifted with the legal right to vote democrat.

Beta is no Obama. Obama is a political predator with the instincts of a shark, lion, and wolf all rolled into one.

His being black made him all but unstoppable because early on we were told by the press that the only reason people wouldn’t vote for him is because of his race. In setting the field like that most dem’s were hooked because the last thing they want to be labeled as is a racist.

About all Beta had going for him was pretending to be Hispanic and his ability to regurgitate the leftwing talking points pretty well flawlessly.

I’m not sure who it will be yet but the next democratic candidate for Potus will almost certainly be a minority and likely female, if not a minority you can bet it will be a woman.

No way they jump off of the identity politics wagon and start acting sensible.

Beta so far hasn’t shown he can even a statewide election and hasn’t won anything outside of his own district.

AOC or Harris, if not both. Bank on it.

AOC isn’t old enough to run for president, yet.
Hopefully, she’ll be in a mental institution before she is.

Oh, are we paying attention to eligibility requirements now?

The issue of DACA is going to the Supreme Court! It was unconstitutional when Obozo signed his executive privilege into law, and Trump was correct when he ended it!