The doxxer doxxed himself. You wouldnt expect working intelligence from an antifa anyway.

One of Twitter’s most prominent antifa doxing activists has been accused of blackmail, racism and engaging in predatory behaviour toward underage girls, according to a Medium post made by an alleged former housemate. Additionally, the allegations have brought renewed scrutiny to the “cyber warrior’s” rise to antifa stardom.

By day, Christian Michael Exoo is a 38-year-old library supervisor at St. Lawrence University in Canton, New York. However—online—Exoo uses the moniker “AntiFashGordon.” He has gained a large following in left-wing networks for his activism with antifa and by releasing “doxes,” or personal information, of his ideological opponents to his 25,000 followers on Twitter.

Exoo proudly boasts on his Twitter biography that he has gotten people fired from jobs, removed from schools and kicked out of homes.

Before becoming an online antifa activist, Exoo contributed to Salon, Alternet, Truthout, and other left-wing media outlets. Exoo also worked for Weave News, a left-wing citizen-journalist and activist group that was founded at and funded by St. Lawrence University, where his father, mother, and brother are employed as professors. Exoo was also a one-time aspiring actor.

With an undergraduate degree in information science, Exoo teaches doxing training seminars under the euphemism of “open-source intelligence research.” In 2017, he trained students at St. Lawrence at a conference organized by Weave News. In one presentation slide to his class, it read: “In this exercise, we are going to find the Facebook profile of our subject, and find all of the posts he’s ‘liked.’”

Victims of doxing suffer public shaming and often real-word harassment and death threats. Left-wing defenders of doxing say it is necessary to reveal and punish the far-right. But Jesse Morton, a former Islamic radical and now counter-extremism expert, says that victims of doxing are often radicalized further because of it.

“There are certain cases where it has silenced ideologues clearly calling to violent extremism, but the effects are often counterproductive,” Morton says. “It only cements the views of those doxed, can trigger violence and further entrenches extremists in the view that they’re under attack.”

Morton spent three-and-a-half years in federal prison for his involvement with an Islamic terrorist group. Since 2016, Morton has been involved in counter-terrorism work and currently leads Light Upon Light, a Washington D.C.-based counter-hate nonprofit.

“[AntiFashGordon’s] efforts only fuel the far-right’s propaganda,” Morton says. “They provide evidence for the victimization narrative that drives recruitment and thereby make it incredibly easy to replace any member doxed into leaving with several more recruits.”

Under his pseudonym, Exoo has been interviewed and praised in numerous stories for his role in being a powerful antifa “cyber warrior.” But a recent Medium post by “Sora M.C.,” who claims to be an ex-housemate of Exoo, accuses him of frequently using a slew of racial slurs in the course of his “investigative” work and of general predatory behaviour.
The anonymous author writes: “I’m here because I’m a young, Black, transgender activist delivering a warning to organizers once again after having been psychologically manipulated by an egotistical and power-abusing person who has a pattern of inappropriate behaviour on- and off-line.”

The writer continues: “His motivations are primarily to aggrandize himself and make him feel admired by others—to be a white saviour.”

The author describes a time where the two were in a grocery store together, and Exoo allegedly seemed excited that an underage girl had flirted with him.

The author also goes on to state other examples of how Exoo allegedly acted in an abusive or inappropriate manner that left them uncomfortable on multiple occasions, including one incident of alleged inappropriate touching.

“Sora M.C.,” says some of these allegations were previously published on Twitter last summer, but they deleted it after Exoo allegedly held their personal items “hostage.”

Exoo has been exceptionally careful in removing his name and traces of his identity from any of his current social media accounts. However, his alleged involvement in a doxing project that defrauded people into disclosing their addresses may have backfired.

In summer 2018, a website offering free anti-antifa t-shirts was circulated and shared among right-wing users on Facebook. However, the site was a fraudulent project that never had any merchandise and instead was used to fool some three-dozen people into giving their names, phone numbers and addresses, which were then released publicly. The site asked victims to pay money in order to have their information removed. It is unknown if any money was transferred.

A crowd-sourced investigation found the site’s domain was purchased through Bluehost by Christian Exoo. After that revelation, Exoo temporarily locked the “@AntiFashGordon” account and deleted his personal Twitter and Facebook accounts.

Before becoming a prominent online antifa doxing activist, Exoo had a long history of radical left-wing views. In 2017, he expressed support for political violence. “It’s really satisfying to punch a racist. They bleed nice, too,” he tweeted. Many of his posts conflate regular conservatives with the far-right and neo-Nazis.

Exoo also expressed support for George Ciccariello-Maher, the infamous former Drexel University associate professor who tweeted controversial posts calling for a police officer to be killed and voiced support for “white genocide,” among other things. Exoo signed a petition in support of Ciccariello-Maher in 2016 and also wrote on Twitter: [He] is a wonderful person, fantastic scholar, and a national treasure. Come at me, alt-right bros.”

While Exoo’s cyber activism exists within the online realm, his radical posts have appealed to at least one known extremist who unleashed his violent desires onto the real world. In August 2019, it was revealed that Connor Betts, the antifa black bloc activist who killed nine in a mass shooting in Dayton, Ohio, was a fan of Exoo.

Four months before his massacre, Betts was informed of a far-right rally in Dayton by none other than Exoo himself. “Thanks for the heads up,” Betts wrote in response to Exoo announcing the details of the event. At the protest, a witness who went to school with Betts said he saw him masked and carrying a rifle similar to the one he would later use in the August mass killing.

Christian Exoo did not respond to repeated queries for comment. 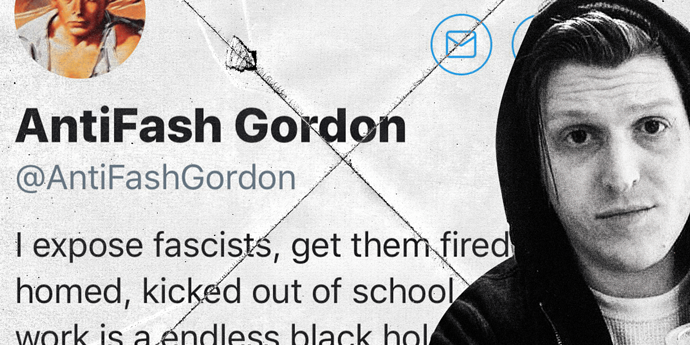 One of Twitter's most prominent antifa doxing activists has been accused of blackmail, racism and engaging in predatory behavior toward underage girls.

Karma is gonna be hell on this turd.