(Not so) secret meeting between Trump and top military generals

Brother Nathanael says to send ■■■■ to Greenland.
I don’t know how serious he means that, but the fact remains that America has been embroiled in endless wars for ■■■■■
Something is changing in America under Trump for sure.
http://www.realjewnews.com/?p=1405

Nathaniel was born and raised ■■■■■■■ He became a follower of JCHRIST and boldly exposes all the hypocrisy.

Yes. He says he was disgusted even as a child by the teaching of Judaism. I corresponded with him a few times. He has a wicked sense of humor too.

Nathaniel seems giddy that the pentagon, which is under the constitutional authority of civilian control, has thumbed its nose at congressional subpoenas.

The DOD is under the purview of the executive branch of government.

the executive branch of government.

Trump?
I don’t know much about his life and it doesn’t really matter, as long as he drains the swamp and weakens the deep state.

Trump?
I don’t know much about his life and it doesn’t really matter,

Well he’s the chief executive for now, so I would say yes.

as long as he drains the swamp and weakens the deep state.

he’s the chief executive for now

Obama appeared out of nowhere.
We don’t know where he was born, where he grew up, what he was doing until 2008.

Well he’s not doing that.

Many pedos are being busted. That’s something.
Next in line are Bill and Hillary.

I think people had something else in mind when he said he was going to drain the swamp.

That’s correct.
Even now many people deny the existence of deep state：
Hidden powers, hidden movers and shakers who never make an appearance on TV, or better still, hidden in plain sight.

Like the Queens of England and Holland come to the US for a Bilderberg meeting, there is no report on mass media, zero, zilch, nada.

So if one attends Bildeburger meetings they are members of the so called “deep state”.

And the “deep state” extends beyond the US boarders???

Obama appeared out of nowhere.
We don’t know where he was born, where he grew up, what he was doing until 2008.

Well that simply isn’t true, just because 2008 was the first time you heard of him.

And the “deep state” extends beyond the US boarders???

Of course. They are also the so-called cabal.
International satanist/Zionist freaks.

Well I’ll have to ask for a link to that…

This is a good introduction to David Icke’s work.
I’ve been reading/watching his stuff 25 years or so.
Certain things he never touches (like holohoax) but understand that he has many ■■■■■■ followers, so he doesn’t want to antagonize them. I was hoping more for proof, not just David’s opinion. I’m well acquainted with him. Use to listen to him back when AJ was broadcasting from his basement on SW radio. 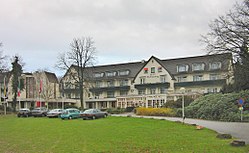 The Bilderberg meeting is an annual conference established in 1954 to foster dialogue between Europe and North America. The group’s agenda, originally to prevent another world war, is now defined as bolstering a consensus around free market Western capitalism and its interests around the globe. Participants include political leaders, experts from industry, finance, academia, and the media, numbering between 120 and 150. Attendees are entitled to use information gained at meetings, but not attri...

Their organization and meetings were top secret.
But now that they have been exposed, they decided to go public.
Some years ago, you would get laughed at if you mentioned them.