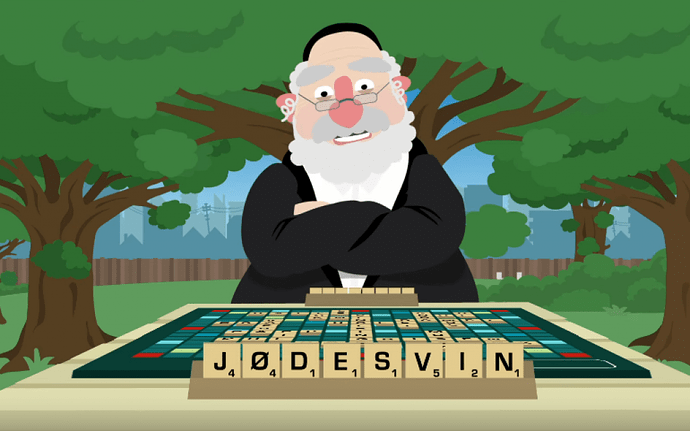 TV official defends the clip, in which a man playing Scrabble with a Haredi Jew is frustrated that he cannot use the derogatory term to score points

The Norwegian player in the video is a victim of brainwashing and cannot use the word “■■■■■■ swine” to score points.

Happy to see some people being brave enough to mock the self-proclaimed “chosen people” in spite of the power they possess in our day and age. This takes guts, especially if you’ve actually got a visible career you make a living from, one the rats can attack.

Mock Islam? You’ve got virtually all the Western governments and media behind you.

Mock ■■■■■ or speak the truth about biological race? You’re suddenly fair game for any sort of attack.

■■■■ are virtually absent in Japan (except a few Americans and Israelis) and yet they have a total control over the Japanese media, be it TV, newspapers or publishing.

Norway has been invaded by Africans and Arabs in recent years, and yet some Norwegians are aware that it’s the ■■■■ who are pulling the strings.

■■■■ are virtually absent in Japan (except a few Americans and Israelis) and yet they have a total control over the Japanese media, be it TV, newspapers or publishing.

That’s all you have to deal with? Sounds like you have it pretty good.

Needless to say, Bank of Japan, owned partially by the Rothschilds and Rockefellers, works hand in glove with the Fed

What boils down to is money, who issues the currency, who owns the central bank