What sort of error message do you get? 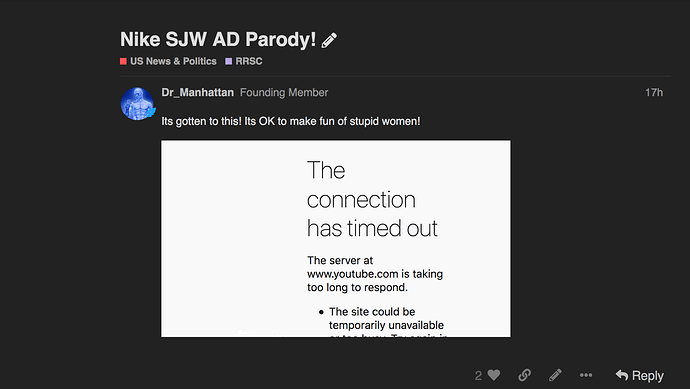 I am going to try shutting down and restart again.

Before you try that do a speed test at speedtest.net .

Meg’s? That’s more than plenty. My download speed is usually around 7 megs and upload around 3.6.

The only time I’ve ever had any issues with the same error message was when my speed tests showed a download speed below 1 meg.

Yeah, I don’t know what the hell is going on. I can access all other sites, just not Youtube. I know its not my computer, because I tried on another computer and I have the same problem, as well as my mobile device. I am working from home today, so I am anxious to go somewhere else. I had a friend investigate if they are having the same problem and they said they were able to access it. I might go to a coffee shop and try there.

IF it were me I’d hit the reset on my modem, then unplug it for a couple of minutes, plug back in and reboot. Sometimes the buffers get so full there’s just not enough bandwidth left.

Ahh, I didn’t try that yet. I will try doing that now.

IF that doesn’t do it take a break and try a local internet cafe or some other place you can get online.

It means he doesn’t utilize the period (.) key to get rid of the need for more characters.

All one has to do is hold down the key and make a string of dots until the warning disappears. Only three of them will show up in the post.

There’s another robot warning that pisses me off more than the 20 character crap.

“Is this a complete sentence?” or something to that effect. I often get rid of it by placing an emoji.

is not a complete sentence as defined by the dumbass robot.

@Dr_Manhattan
What kind of error report message do you get when you try to play a YouTube video?

I often get “The uploader has not made this video available in your country.”

Correct. A few months ago we had to replace my modem because I was having a similar issue and I remember how we diagnosed it.

I was simply repeating your answer without typing “more characters”.

I used a string of about twenty dots in a row. You only see three of them.

Thanks man! That worked! I got my you tube back again!

…taking more effort and adding confusion to the reply.

Not really. I’m a touch typist and anyone familiar with the minimum character limit should be able to understand it.