Eager and ready to infect the other states.

From March 1 to May 1, about 420,000 residents of the Big Apple - home to nearly 8.4 million people - particularly from the wealthiest neighborhoods, reported The New York Times.

While there was relatively little change in some zip codes, others such as SoHo, the West Village, Morningside Heights, the Upper East Side, the Financial District, Midtown, Gramercy and Brooklyn Heights emptied by at least 40 percent.

Meanwhile, Manhattan’s overall population has fallen by almost 20 percent as the lockdown enters its third month.

Income was perhaps the strongest indicator of how many residents in a particular neighborhood had fled.

NYC has been the epicenter of the U.S. outbreak with more than 186,000 cases of coronavirus and more than 15,300 confirmed deaths with at least 5,000 more probable deaths.

For its report, The Times looked at data provided by New Mexico-based Descartes Labs, a geospatial imagery analytics company.

The company used anonymous smartphone geolocation data to track where New York City residents were in February, and whether they left the city or not after the pandemic.

The sample population was 140,000 people from nearly every census-counted neighborhood in the five boroughs.

While smartphone data is not perfect, and not every resident owns a smartphone, it provides a general idea about New Yorkers’ mobility.

Between March 1 and March 15, there was a small trickle out of New York. But, after Mayor Bill de Blasio announced the city’s schools would be shut, there was a mass exodus.

The Times found that residents from neighborhoods where the median income is $90,000 or less (the bottom 80th percentile) stayed in their homes.

However, more than one-third - 35 percent - of the top one percent - escaped to summer homes in Long Island, upstate New York, or other states.

According to CNBC, the top one percent of New York City earns bout $2.2 million per year on average and the top five percent annual income is about $480,780.

The data is consistent with other reports of wealthy New York City residents having fled.

People that live in vacation towns, such as the Hamptons in Long Island and the Catskills in upstate, complained that their grocery stores were being emptied by city people who were living in their summer homes.

Last month, officials said the price of rental homes in the Hamptons soared from $5,000 per month to more than $30,000 for a two-weeks period.

Small town populations practically doubled as Big Apple residents fled to their summer homes, but locals said city dwellers were bringing COVID-19, the disease caused by the virus, with them. 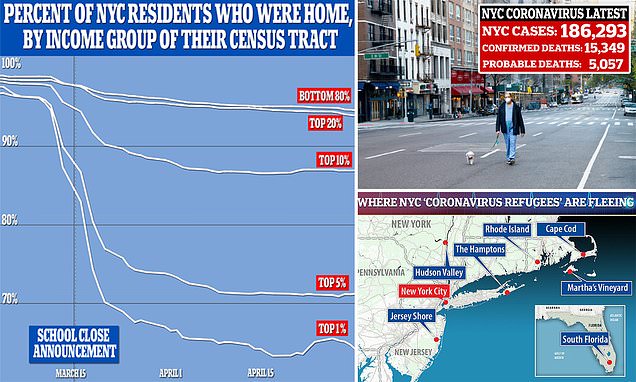 Five percent of New York City's population, or 420,000 people, left between March 1 and May 1 amid the coronavirus pandemic. Residents were typically white and earned more than $100,000.

Mayor De Blowme was grilled on this issue by Maria Bartiromo and he simply lies through his teeth! The best thing that New York City could do for itself is vote this commie POS out of office!

Just like Newsom from CA - they are asking for a hand-out from the Federal Government. In which they - both states - have drained their entire spendings in just a few years. I suppose their “rainy funds” were drained before the pandemic even started.

NY city beaches remain closed for Memorial Day by order of the mayor. Said he would put up fences if needed.

This should be fun.

However, more than one-third - 35 percent - of the top one percent - escaped to summer homes in Long Island, upstate New York, or other states.

I own a small cabin on a lake. If I go there and do my shopping at the local grocery store does that make me some sort of social outcast now?

These types of articles are bullshit. If the virus is completely overblown and hyped up by the media then who gives a fuck about where people go and what they do?

Historically people have always run from the cities during plagues. Cuomo has acknowledged that those sheltering in place have had higher rates of disease.

I thought NY funded the country! I can’t even count how many times I heard hipster douches spout that shit when I lived there.

Hey Lurch, how about you find that 800 million your wife STOLE…I mean ‘lost’?

Fuck this clown. NYC’s economy was toast long before CCP Syndrome thanks to Cuomo, Bloomberg, and Lurch.

People are being tricked into demanding that this country go full socialist. We are supposed to hate people that have vacation homes and the money to go stay in them whenever they want.

Can you please stop with the TikTock?

That is a Chinese platform which you are supporting and quite frankly, I don’t want to see what looks like a pedofilias dream on my screen. Take it to the GC where it belongs if that’s what you get off on.
[/quote]

If you have a problem with @AlexC take it private. Don’t subject everyone else here to your bullshit.

I have to laugh at the Trump supporters wanting to bash rich New Yorkers when they voted for one. Having lived in the Metropolitan area for all of my 70 plus years, I’ve despised rich New Yorkers for all of that time. I’ve never known one, Liberal or Conservative, who wasn’t a hypocritical thief and Trump is the biggest one. But then, he comes from a family of thieves who, except for Fred, have never had to really work a real job for their entire lives. Their president has made at least part of his fortune screwing small contractors out of their fees for jobs that they did for him, both in the city and New Jersey. He has hated and abused little folk all of his life and when he doesn’t need their vote anymore, he’ll throw them to the curb. This isn’t a guess, this is a prediction.

As far as the locals getting teed off because the creeps are spreading the virus in their home towns, remember this, you are the people who sold the properties to these people in the first place. Just remember, every economic theory and ideology has its downsides. For capitalism, its the side effects of greed. In this case, Covid-19 and everyone gets to share in it.

Yes, hypocritical thieves, which brings us to the Biden family, they live in Delaware to avoid state income taxes, and liability suits from those in other states. Nice bunch you’ll be voting for.

They are all saints and all turds; through the magic of muckraking and cherry picking, the final two for leader of the free world are horrible human beings. Trump is a crude playboy, who enriched himself ripping off contractors and others who thought they could benefit from association. Biden is (or used to be) a more articulate bully (to women in private) and old creep who enriched his family by ripping off the taxpayers.

You are so right. No one was complaining when these wealthy people (aren’t Republicans supposed to be obsessed with them?) were spending lots of money so the locals can live in a vacation spot all year round.

I’ve been around to see every president since the end of WWII, although Ike was the one that I grew up with. I didn’t really know that much about Truman until after his term in office, but my respect for him as a man has grown enormously thru the years, even if he made several major gaffs that have caused serious problems for this country. For one, refusing to accept Ho Chi Minh’s offer of friendship to protect Vietnam against its age old enemy, China. Then, getting America embroiled in the Korean War (police action) that led to other ill-advised actions in Vietnam, Iraq and Afghanistan. His third major gaff was not to follow Douglas McArthur’s advice and nuke the North Koreans…along with their Chinese military allies. We certainly wouldn’t be worrying about Kim Jong Un all these years later.

Ike had his nuclear warrior fiasco, marching one million healthy soldiers into mushroom clouds to test how much radiation they could absorb and still function. Every man later died of some form of cancer. However, I still consider him our best post war president because he built the American infrastructure. Kennedy, on the other hand, was a drug-sotted lunatic, Johnson was a crook and a coward, Nixon a maniac, Ford, an establishment stooge, Carter, a control-freak-incompetent, Reagan a pawn of the corporate world, who Barry Goldwater (the last honest man to run for the presidency…in my opinion) despised, George H.W. Bush, another establishment stooge, Clinton, a thief and a traitor, both economically and militarily, dismantling the CIA during his eight years in office, George W. Bush, an incompetent crook and quite possibly also a traitor, Obama, a Wall Street puppet and an advocate of paralysis by analysis, and last but certainly not least Donald J. Trump who I have detested for approximately 35 years. Although I never met the man, I did once belong to his parent’s church, Marble Collegiate in Manhattan, so I know quite a bit about his family. I have also talked to small contractors who he’s screwed out of money for jobs he never paid for. His legal team keeps the poor bastards in court until the legal fees bankrupted them. I’ve also lived in the Metropolitan area my entire life and know full well how business is connected to the brotherhoods where mayors, big realtors, big contractors, Mafia Dons and anyone with a modicum of power belly up to the bar and decide the fate of city. business. Trust me, if you’re in the real estate or building trade, you have to be a crook to be corrupt. This city make Sodom and Gomorrah look like the Garden of Eden. Just wait until this guy gets elected for a second term, all these Trump voters are going to find out what he does to people he no longer needs. It almost makes me want to see him get elected, just to hear them whining about how they never thought he would do this to them. I’m sorry, but there’s a bit of Trump in me, I can be very vindictive.

So, I take it that your hatred of Trump (TDS) will lead you to vote for Joe Biden.

Sounds like a Ron Paul supporter or Libertarian. BTW, who is this years Libertarian candidate? Ralph Nader? Gary Johnson? 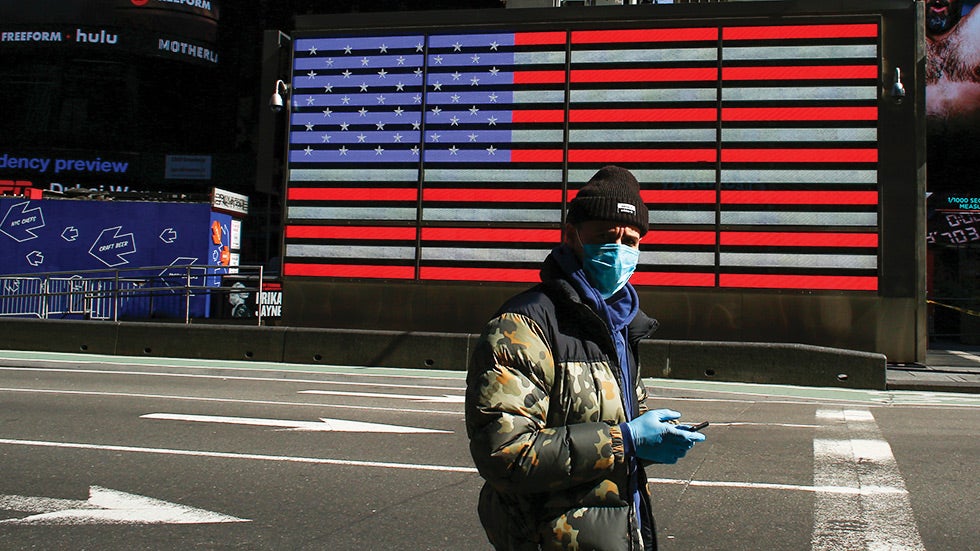 It was on the decline even before the current outbreak.