# New flu strain found in China; WHO warns ‘the worst is yet to come’

New flu strain found in China; WHO warns ‘the worst is yet to come’

More U.S. governors are walking back or delaying reopening plans as Covid-19 cases climb around the country. New Jersey Gov. Phil Murphy announced the state will delay a resumption of indoor dining that was planned for Thursday. New York Gov. Andrew Cuomo hinted earlier Monday that his state was considering the same, however stopped short of the change. Cuomo announced that New York shopping malls will be required to have virus-filtering air conditioning systems in place in order to reopen.

New strain of flu found in China has potential to become a pandemic, scientists warn

09:30 a.m. London time: Scientists have identified a new strain of flu carried by pigs in China that they say has the potential to become a pandemic.

The new strain is descended from the type of flu that emerged in 2009, known as “swine flu,” that caused the first global flu pandemic in 40 years.

The scientists, from several Chinese universities and the China’s Center for Disease Control and Prevention, said the new strain of flu, which they called “G4 EA H1N1,” is a variation of swine flu, and includes the “G4″ genotype that has become predominant in swine populations since 2016.

As with swine flu, the new strain has been identified as having “all the essential hallmarks of a candidate pandemic virus,” they warned.

The peer-reviewed findings were published in U.S. journal Proceedings of the National Academy of Sciences on Monday. — Holly Ellyatt

1:50 p.m. Singapore time — New Zealand has canceled plans to host the Asia-Pacific Economic Cooperation summit scheduled for next year because of the coronavirus pandemic — and will instead lead a virtual forum, reported Reuters.

The APEC summit includes a series of meetings that culminate in a so-called leaders’ week at the end of the year. Next year’s leaders’ week was supposed to be held in Auckland in November 2021. APEC, which focuses on trade issues, has 21 members including the U.S., China, Japan and Mexico.

Reuters reported Prime Minister Jacinda Ardern attributing the decision to travel uncertainties due to the pandemic. Many countries, including New Zealand, have closed borders to prevent imported infections. Ardern said the country has no plans to reopen its borders yet, according to Reuters.

The pandemic has also forced this year’s host, Malaysia, to postpone some meetings. —Yen Nee Lee

10:11 a.m. Singapore time — China’s factory activity expanded in June, with both supply and demand for goods starting to pick up as the world’s second-largest economy recovers.

The country said its official manufacturing Purchasing Managers’ Index came in at 50.9 in June — better than the 50.4 forecast by economists in a Reuters poll. Last month, the index was 50.6, said the National Bureau of Statistics.

A reading above 50 indicates expansion, while below signal contraction. 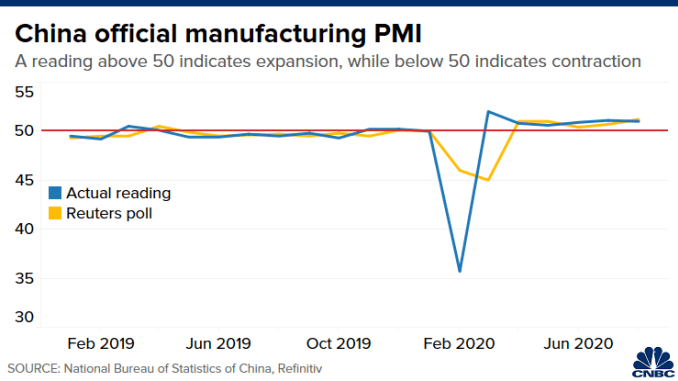 Large-scale lockdowns in China and globally to contain the spread of the coronavirus have hit Chinese manufacturing activity. As economies reopen, experts have warned that a resurgence in cases could force authorities to reinstate some lockdown measures — which has happened in certain parts of China.

The National Health Commission of China on Tuesday reported 19 new coronavirus cases in the mainland. Out of the eight locally transmitted cases, seven were in Beijing, said NHC. The capital city has recently reported an uptick in infections, which led authorities to increase restrictions. —Huileng Tan, Yen Nee Lee

5:08 p.m. ET — Leicester, England, has been ordered to re-institute some lockdown measures because its coronavirus infection rate is significantly higher than anywhere else in the country, according to a report from Reuters.

While the rest of the U.K. plans to ease more social-distancing measures on July 4, Leicester will be closing schools and nonessential retailers. People have been warned not to travel to, from or within the city.

Leicester accounted for about 10% of all positive cases in the country over the past week. —Hannah Miller

U.S. has too much spread to contain the outbreak, CDC official says

5:02 p.m. ET — The U.S. is reporting too many new infections every day for the country to wrestle its outbreak under control, according to Dr. Anne Schuchat, principal deputy director of the Centers for Disease Control and Prevention.

While many other countries in Europe and Asia have managed to bring their levels of daily infection down to a point at which health officials can corner off and contain pockets of the virus, Schuchat said the U.S. is not at that point.

“We’re not in the situation of New Zealand or Singapore or Korea where a new case is rapidly identified and all the contacts are traced and people are isolated who are sick and people who are exposed are quarantined and they can keep things under control,” she said in an interview with The Journal of the American Medical Association’s Dr. Howard Bauchner. “We have way too much virus across the country for that right now, so it’s very discouraging.” —Will Feuer

4:52 p.m. ET — Federal Reserve Chairman Jerome Powell is delivering another warning about the economy amid the coronavirus pandemic, saying the road ahead is “extraordinarily uncertain.” In remarks he will deliver Tuesday before a House panel, Powell stresses the importance of containing the coronavirus.

“A full recovery is unlikely until people are confident that it is safe to reengage in a broad range of activities,” he added. “The path forward will also depend on the policy actions taken at all levels of government to provide relief and to support the recovery for as long as needed.” –

Fk that shit! Don’t let anyone in from China. We now know that China is committed to waging a biological war with the rest of the world if this shit continues. Why else would they be reporting this? More fear mongering? The W.H.O.? How can they possibly be trusted any longer? Seriously! They and the UN have lost all credibility.