Nevada Caucuses on Saturday Predicted to be DISASTROUS for Dems

I think Bloomberg has a real shot. I never ever watch Sean Hannity because I cannot stand him screaming without breathing for minutes on end.

Anyway, I just happened to leave Fox on tonight after Tucker and Hannity couldn’t help himself but to launch into his desperate level of seething of Mike Bloomberg and farming. Fox News is an absolute state of panic right now especially the Hannity people lol

I just turned it on. Apparently Hannity is going full SJW and is advocating for transgender rights and is acting shocked that minorities commit crimes lol

Bloomberg is helping to show that “conservatives” in this country are actually just buttoned-up leftists.

Left wingers don’t have a problem cutting the right out of Everything. But the right never excludes the left because they actually believe in Muh Rights.

Lefties do not believe in rights for their opponents. They just know dumb right wingers believe in them and they take advantage of that.

These people will still claim you’re “oppressing” them even as the firing squads execute you.

I’m actually pretty psyched about a Bloomberg vs. Trump election. Nobody is going to unseat the president by playing mr nice guy. This is why Hillary, Bernie or Biden would lose.

The democrats need a jerk to win. And that’s good for us on the right too, because having neo-liberalism personified in an unlikable unsympathetic character helps our narrative.

Conservatives are constantly complaining about “Liberals.”

Until you actually attack Liberalism - for example by saying your political opponents do not have human rights.

Then all of a sudden they are big defenders of Liberalism. Because they are liberals.

Is “mini Mike” Trump’s line of attack because he has no legitimate substance about Bloomberg’s politics?

Oh shit another billionaire neo-liberal who is basically exactly like me. LOL Yur Short!

It’s already over. Everyone but delusional Bernie supporters know it. 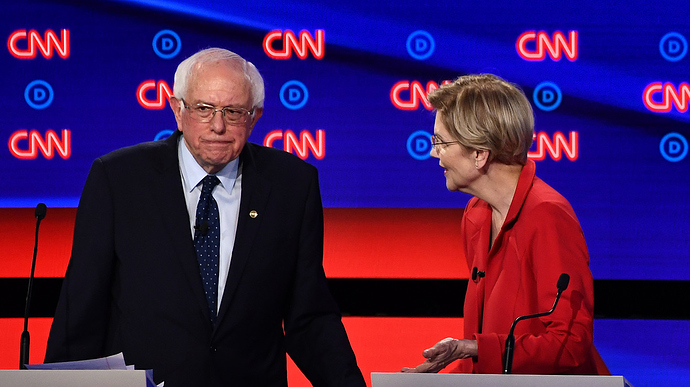 The Republicans lost the house with a good economy and that was just a year and a half ago.

Trump didn’t win the popular vote last time. So from a strictly statistical standpoint he should at least have a difficult time due to 4 years of demographic change. The mess of the Democratic primaries can only help him but I think most people are party loyalists and won’t care. Likely it comes down to if the Dems get out to vote or not.

I do wonder though, can you actually purchase an election?

I know that after a certain point you get diminishing returns per dollar but jeez, I think it’s possible we haven’t yet seen what motivated tribesman money can do.

Jeb Bush and Hillary both proved that money and propaganda can’t sell dogshit, unless the alternative is more dogshit with less money.

The problem with the GOP is that, after Trump, you get into the dogshit pretty quickly.

2016 showed us what happens when both parties put up their worst possible candidates to slug it out.

Fortunately Trump has governed pretty well in spite of it all.

Loved by everyone else

Tell that BS to his employees who hate the rat . And when did “HE” rebuild the WTC ?
The best line from the debates was mini mike spent $466,000,000 to be scalped by a fake Indian .

He’s never built anything other than designing a machine that made Wall Street completely dependent on him.

Watching bloomers try and win The Black and Hispanic Vote is going to be Hilarious as he tries to run against his own record.