This issue has been on the front burner for quite some time and it is looking less likely that the USMC will be ratified by years end, with congress obsessed with impeachment hearings and the incoming IG report. Pelosi’s as being the speaker of the house has never intended to sign the USMC formally known as NAFTA into law due to the fact Democrats don’t want to give Trump any victories, and that most from the Big Club who are bought and owned by the COC, China, that is dictating economic policy of Wall Street and the Multi-national interests are opposed to its ratification as well.

Excerpt from linked article is the main thesis:

"The U.S. multinationals on Wall Street do not want the USMCA to pass because they don’t want President Trump to have leverage that allows him to continue the fight against China and the EU. It is a simple dynamic, USMCA ratification makes the Wall Street prior investments in China worth less.

In all of these efforts U.S. multinational corporations, big companies on Wall St, are heavily opposed to President Trump because they have invested in those overseas operations. Those companies facilitated the loss of U.S. manufacturing jobs" 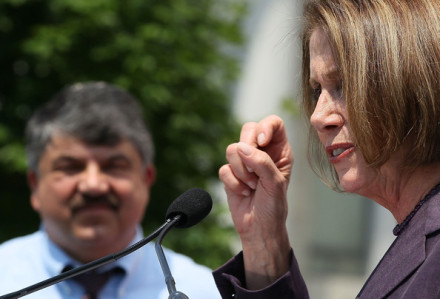 Nancy Pelosi Hides Behind Richard Trumka as Excuse for Not Ratifying USMCA….

The U.S. multinationals on Wall Street do not want the USMCA to pass because they don’t want President Trump to have leverage that allows him to continue the fight against China and the EU. It is a…

So what that witch is really saying is…we don’t want to help the American people, impeachment is more important.

This is why we need term limits.

Its more than that but term limits would certainly be a huge start in draining the swamp. The grift of both parties that are selling out the American people in favor of multi-national companies who are lining their pockets with Chinese money is why Trump was elected to stop. The other thing too, is if we had a media that wasn’t in the tank for Democrats they actually might be able to exert pressure to get this deal done. Here is the kicker though, NAFTA is done! The way the rules were written, if congress doesn’t get this signed, then NAFTA will revert back to 1970’s rules which will be even more adverse for them than the new Treaty USMC, its the way the trade agreement was written as the president has the authority to set the terms. Essentially they are shooting themselves in the foot while also screwing over the American worker.

Pelosi…one person in the way of three countries hammering out a trade deal. She is corrupt and selfish to the point that she is willing to harm her own country out of spite.

She’s a soulless reptilian what do you expect?

It would be good to know if Pelosi has any financial interests in USMCA not passing. I’m sure Diane Feinstein is against is seeing as how she had a Chinese foreign agent driver for years.

Isn’t it odd how she (Fienstein) has been quiet these past several months? Her husband is the one who created the liaison between Shanghai and SanFrancisco and got rich doing so!

This is why we need term limits.

That’s one of the big ones. There are many more. My pet peeve is that freshman Congress members soon learn how to get filthy rich and they would almost kill to get re-elected. Congress is damn near full of millionaires.

All of the filthy rich bastards in our government are willing to do that. It’s sorta like Bill Maher welcoming a recession because it won’t hurt him personally at all.