No matter which country Muslim refugees end up in trouble is never far behind. Now some might say I a bigot or have a case of Islamophobia. But you can’t deny the facts.

If you’re simply presenting facts you are not a bigot. If you are twisting facts for bigoted purposes you are a bigot.

You are simply correct.

The only “peaceful” Muslim countries are those where there is no opposition at all to Islam.

Many years ago when I was a young manager I was interviewing potential candidates for employment. I interviewed this one man that had past experience and came off as a pretty nice guy. I could tell he knew what he was talking about.

I turned him down for the position. After explaining to him that once he made it past his probationary period he would fall into the over time schedule and would be required to work weekends when needed. I went on to say that about 4 months out of the year we worked just about every weekend and since he was new with out seniority he would be stuck working those weekends.

He told me he could not work Sundays because of Church. It was against his religious beliefs to work on Sundays. I told him thanks for coming in but I was not going to hire him. He became agitated and ended up getting himself a Lawyer. Well, he lost.

Now we have US companies putting in Muslim Prayer rooms for their Muslim employees. Some of these companies go out of their way to accommodate Muslims for time off during religious holidays.

Times sure have changed, and I don’t know why we go out of our way to accommodate Muslims.

Times sure have changed, and I don’t know why we go out of our way to accommodate Muslims.

I think it relates to our freedom of religion posture. Islam demands all sorts of things under the guise of religious freedom. Our ‘leaders’ accommodate them to avoid offending them.

What our ‘leaders’ fail to acknowledge is the Islam is a demented theocracy, founded by a pedophile goatfucker over 1400 years ago…followed today by hordes of demented, intolerant men who enjoy subjugating/mutilating women, killing ‘infidels’, and of course, fucking goats.

“Freedom of Religion” has been abused to death by the left and the founders never considered apparently that any religion other than Christianity or Judaism would be practiced in the US.

It’s obvious from their writings their entire mindset was one of a nation governed by Judaeo Christian Values in perpetuity hence they didn’t consider it necessary to make such specifications.

The only “peaceful” Muslim countries are those where there is no opposition at all to Islam.

Good use of quotes ! 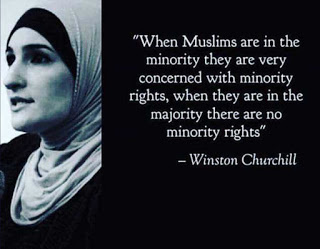