MSNBC’s Chris Hayes: Trump Supporters Must Be ‘Confronted and Destroyed’

As with all social justice warriors, Hayes has been circulating his “cause” all week, building the case for Trump’s apparent racism. He began: “Each part of the coalition has been dealt into the Trump presidency. It is a classic model of corrupt governance. The capo on the top and the many, many bosses below who are given control of their domain to do as they wish.” This statement, clearly meant to place Trump along the ranks of Hitler and Mussolini, has been a staple MSNBC scare tactic for some time now.

Next, Hayes turned his ire on the American people: “But the base, what does the base get? The folks in that arena. Well, it’s obvious, isn’t it? They get to chant. They get to revel in their own Americanness and primacy at the expense of others.” Not only is the base at fault for their patriotism and desire to protect their country but “Trump and now the entire Republican Party and most of the conservative movement realize that is enough for them.”

Nevertheless, Hayes continued to insist on the eminent danger posed by millions of peaceful Americans and implored: “It must be peacefully, nonviolently, politically destroyed with love, compassion and determination, but utterly confronted and destroyed. That is the only way to break the coalition apart.”

“Not by prying off this or that interest. They are in too deep. They have shamed themselves too much. The heart of the thing must be ripped out. The darkness must be banished. The people who feel moral revulsion at that display we saw last night must collectively mobilize in greater numbers than the chanters.”

If you can stomach watching this soyboy punk then by all means let it inspire your inner rage! 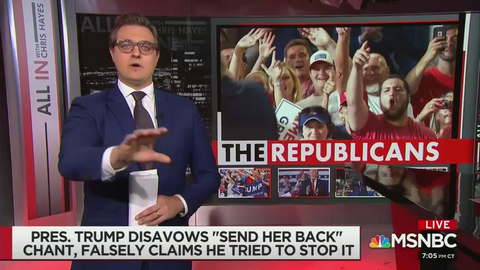 MSNBC’s Chris Hayes: Trump Supporters Must Be ‘Confronted and Destroyed’

Several days later, the liberal media still hasn’t moved past President Trump’s controversial tweets, but are instead rallying around them in opposition. MSNBC’s All In host, Chris Hayes, took a...

Good. Let them come and try to destroy me with their love and tolerance. I hope they send their Antifa foot soldiers for the first wave. I could use a giant black wall in front of my house!

They have shamed themselves too much. The heart of the thing must be ripped out. The darkness must be banished.

Why is it that every time liberals are forced to confront a horrible thing they’ve done, their instant response is to project that on their opponent?

That’s all this is. Projection.

“It must be peacefully, nonviolently, politically destroyed with love, compassion and determination, but utterly confronted and destroyed.

Oh, that is downright icky. I don’t want to be touched with “liberal love” or compassion with a 10 foot pole.

Its the same reason that shills are often the quickest to label someone else a shill.

They accuse others of being what they are, as an attempt to prevent themselves from being outed.

“You’re racist!” They say, as they try to important an underclass of brown slave labor.

“You hate blacks!” They say, as they support policies that destroyed the black family as a social unit.

“You hate the poor!” They say, as they support policies that ship our jobs overseas.

Modern leftism is a mental disorder that would not exist without copious amounts of projection and gas lighting.

Is this why they always show up at our rallies and physically attack us? We never bother them at their rallies. So much tolerance and love.

Yeah love and tolerance like OWS, BLM and ANTIFA lets not forget Ferguson, Baltimore and Berkeley

These people are so out of touch it boggles the mind, they can’t accept the peaceful results of the 2016 election for crying out loud.

Maybe libs need someone to lean on.

That was really awesome. I’m glad they chose chic-fil-a. Not one person of any color was not having a great time. Look at all of the smiles and joy.

Chrissy is just giving credence to Trump’s claim that the mainstream press has become the enemy of the people.

Hayes has millions of viewers- in his imagination. In truth, MSNBC lags behind even CNN-the network that actually pays airports to play their nonsense in terminals.

I am unconcerned with the panting gesticulations of junior Jimmy Olsen wannabe.

Exactly! People like Chrissy are doing their part in getting Trump re-elected and they just don’t know it!