“Go to college, kids, or youre a failure” said everyone working at a high school, including the janitor. Now most of them are virtually homeless.

For many millennials, the idea of homeownership is still a big picture dream, with a new study saying 89 percent plan to purchase a home in the future — but simply can’t because of student debt.

According to a recent study released by Apartment List, 6,400 millennial renters nationwide were surveyed in regards to their plan for owning a home. Despite the majority of young people wanting to migrate away from renting, 48 percent have nothing saved for a down payment.

One of the leading reasons, according to Apartment List, is because of the staggering amount of student loan debt many millennials carry.

For millennials without a college degree, the odds of having enough money to purchase a home are even lower. Just six percent say they’re able to save enough for a down payment in five years, the study revealed.

Apartment List’s findings echoed separate studies illustrating how the student debt overhang is reverberating across the economy. A study released last year by the Federal Reserve Bank of New York showed that over the past decade, student loan debt in the U.S. has increased by 170 percent. Today, the average borrower has $34,000 in loans.

The Fed study also estimated that the average monthly payment on a student loan increased from $227 in 2005 to $393 in 2016. This means that with the rising cost of education, more young people are having an increasingly harder time saving for a traditional 20 percent down payment on a home.

As a solution, 19.4 percent of millennials surveyed said they are relying on financial assistance from a family member in order to make home ownership more attainable. However, the amount of assistance that a young person receives varies greatly based on income.

I bought my first home costing $100k on my $35K/yr salary by saving money, loading credit cards, and eating a lot of rice and pasta until my next raise.

These little shits are spending too much on non-necessities.

Have any who really want to buy spoken to a lender & found out about this loan? It is the only loan besides that available for veterans that requires no down payment.

Those eligible wouldn’t be city slickers with all sorts of entertainment venues around them, but would hahave a stable home base & a start paying off their mortgage.

And how do we know that they are “little shits”? Some of the most entitlement minded people I’ve met in Massachusetts are over 40. Sometimes younger people in their 20s are a breath of fresh air by comparison.

They may be working & in grad school at the same time. Moving out of mom’s basement & renting with a few roommates. Getting married. Doing things with their lives where the opportunity wasn’t there growing up, like traveling.

I’m not understanding the one size fits all, if they don’t do it like I did it, they’re little shits mindset here. There are jobs available on the Federal level that, if held for at least 5 years, will totally pay a student loan debt.

There’s joining the U S Armed Forces with a benefit of zero down payment, one time per lifetime housing loans, as well as the Guaranteed Rural Loan for lower/middle income homebuyers. Many aren’t putting down 20% any more, but lower amounts, & are still purchasing.

One size doesn’t necessarily fit all.

Succinct, entertaining, educational, and shocking. I did not know that uni. pay no taxes. We now have the best educated unemployed, burger flippers, janitors, and sales clerks in the free world. Yayyyyy!

We got through five years of college eating what we could catch, kill, and cover up Ramen Noodles with.

Read what I was replying to.

Or the most indoctrinated…

Doubtless there are many ‘millies’ (millennials) that are swamped with student loan debt- for that I have little sympathy.
They were legal adults (who could and did and do vote Dem.) and yet their childish fantasy of ‘pursue your dream and all will work out’- didn’t.
+10 points: If you went to a state school, it might not be quite as Instagram worthy, but you leave with little debt (if you are willing to work part time while in school).
+20 points. If you majored in STEM- student loans are a smaller issue as you have stable well paid employment.
-15 points: If you went to an elite private college- that was a really stupid choice unless you’re currently pulling down strong six figures from ‘old boy’ connections (in which case+30 points).
-10 points: If you went to Europe for a semester or a year to ‘experience it’, then you now ‘experience’ the additional debt you foolishly racked up- have you Instagramed a pic of you loan statement?.
-25 points: If you went to a private school and it was not uber famous, or worse-
-40 points: you majored in four or six years of STUPID (Some Tedious Useless Peurile Indulgent Dithering), if so, at least you have the memories and the bong. Perhaps you were doing bong hits in high school while watching a DVD of Raiders of the Lost Arc - and decided to major in archeology- your choice- your consequences.

Sorry if I seem hard hearted; perhaps you should go and beat the hell out of one of you idealistic professors.

We now have the best educated unemployed, burger flippers, janitors, and sales clerks in the free world. Yayyyyy!

And Boomers who won’t die off, leave their high paying jobs, and who continue to occupy the vast majority of positions of corporate and political leadership that created this financial mess to begin with. 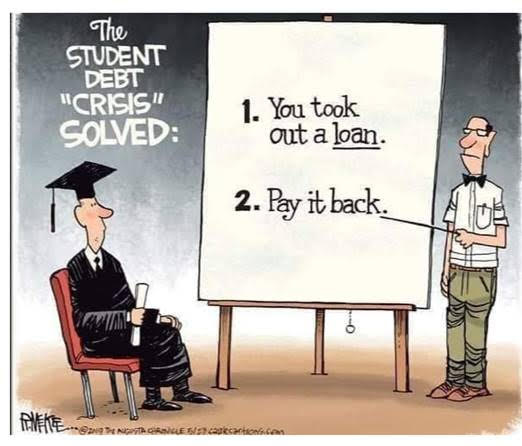