The reason MMT works so well for the US and allows for us to believe that deficits don’t matter, is that we only borrow in dollars. So long as we never borrow in other currencies, the system will likely keep working. Well, at least so long as the US dollar remains the world’s reserve currency because that creates a global appetite for dollars that allows for us to sell our debt.

The US will never retire its public debt. It will always and ever be refinanced at different rates and maturities. The goal is not to have zero deficits or to ever bring the debt to zero. This also works because we borrow only in dollars and we are the world’s reserve currency.

Still, it all does push to prickly questions about taxation. If the government doesn’t really need more than a third of my income in order to pay for roads, fix bridges and buy bombs, shouldn’t it give my money back?

I think the short answer is that MMT works until it doesn’t work. Thus if the government went to a zero tax, borrow-it-all regime, then foreigners would quickly start losing faith and start demanding higher interest rates and/or shorter maturities. Once that happens, you get a downward spiral as borrowing starts to increase further to compensate, and you eventually end up in Zimbabwe territory.

An excellent topic. Here are my thoughts:

Though Zimbabwe isn’t like the US. It borrowed in dollars (largely from the IMF) so printing its own currency was ineffective in terms of monetizing its debt.

I am not clear about MMT but is this where money is in three pots - Government money, Private money and Foreign money. Government has to balance the foreign money, it doesn’t matter what happens between private and government, and money is introduced as government supplies it by printing it. Infrastructure, education, health are all a mix of government or private money and the government could just print money to make that happen. The problem is protecting it from bleeding across the border into other countries through import export or corporate coffers. The option to printing it is taxing for it. Am I on the right page here?

The thing that AOC says that resonates with me is that “whenever a Dem proposes new spending like the Green New Deal (GND), the immediate refrain is ‘how are you going to pay for that?’ But when Congress magically allocates a $70b increase to military spending no one bats an eyelash or asks the same question.”

So she’s basically saying that’s MMT right? Divorcing taxation from the times when we need to spend, right? The question I still have is why does this apply to the GND and not other spending? Or perhaps, how does MMT factor into existing spending, and what are the implications in terms of funding a GND?

A good marker to me - everything has (and must have) a common sense limit. I don’t fully comprehend this MMT, but I share @John’s overall skepticism/caution.

I am skeptical that this is an idea born of MMT (although I’m confident AOC has come across MMT ideas in the progressive circles she clearly hangs out in), but the simple observation you make.

The economy has a capacity. It is somewhat flexible, but over the long term, it can only produce a fairly predictable amount. The government consumes a portion of that productive capacity. What the government doesn’t consume is left for the rest of us.

There is no magic MMT pony; the bill has to be paid. Ramp up government spending and there is still less for us individuals and private companies. We will fight over it and prices will rise.

I wonder, do you just make this up as you go?

Why the Dollar’s Reign Is Near an End

For decades the dollar has served as the world’s main reserve currency, but, argues Barry Eichengreen, it will soon have to share that role. Here’s why—and what it will mean for international markets and companies. 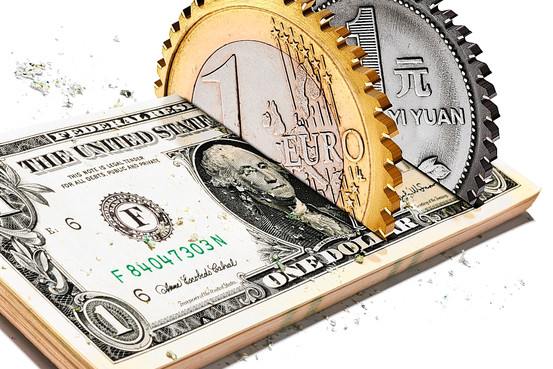 Why the Dollar's Reign Is Near an End

The U.S. dollar will soon have to share the role of the world's currency, argues UC Berkeley economist Barry Eichengreen in The Wall Street Journal. He explains why the change is coming—and what it will mean for international markets and companies.

I think the short answer is that MMT works until it doesn’t work. Thus if the government went to a zero tax, borrow-it-all regime, then foreigners would quickly start losing faith and start demanding higher interest rates and/or shorter maturities. Once that happens, you get a downward spiral as borrowing starts to increase further to compensate, and you eventually end up in Zimbabwe territory.

bingo, bango and bongo, spot on.

You don’t need to have a zero deficit to reduce dept as a percentage of GDP. Generally, so long as long term GDP growth is higher than the deficit the debt won’t be a problem - regardless of the currency.

I reason that the only thing keeping all the canaries flying in our proverbial overloaded cargo plane is the Petrodollar.

The idea that we can keep this going because we only borrow dollars isn’t really accurate because the bankers we borrow from aren’t us, and the dollars we borrow aren’t ours, they are ultimately theirs.

The Petrodollar is what keeps people buying dollars with other currencies, and what helps keeps the real bankers sponging at the top fat and happy living off of the churn.

If the Petrodollar fell the ability to borrow would evaporate very quickly.