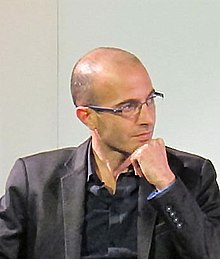 Yuval Noah Harari (Hebrew: יובל נח הררי [juˈval ˈnoaχ haˈʁaʁi]; born 1976) is an Israeli public intellectual, historian and a professor in the Department of History at the Hebrew University of Jerusalem. He is the author of Sapiens: A Brief History of Humankind (2014), Homo Deus: A Brief History of Tomorrow (2016), and 21 Lessons for the 21st Century (2018). His writings examine free will, consciousness, intelligence, happiness and suffering. Harari writes about the "cognitive revolution" occu...

Yeah, there is no AC, and Russia, China, North Korea and Iran at least, aren’t playing the new world order game….wonder who wins…

What are your pronouns?

Yuval Harari says that the human brain is hackable.
Prove it by speaking without the crappy Israeli accent.

Watson has a good video

This is Klaus Schwaab’s right hand man. Need we say more of who this Marxist scumbag really is?