Is Tucker Carlson Part of The CIA? Watch This Shocking Video!

SPREAD THE WORD Unite With Patriots Today! Click The Button Below & Join MyPatriotsNetwork For FREE! YES! SIGN ME UP! In Tucker Carlson Part of…

Controlled opposition at its best.
He works for the Rothschilds.

Wouldn’t surprise me if he did! He lost me when he refused to defend the claim of voter fraud, instead choose to cover UFO’s. The “Cucker” is a California liberal!

Tucker now says there were major questions with the election

Yeah what is up with that? Maybe when he found it was safe to do so and wanted to increase his viewership so he changed his tune. While he does some good stories, he still can’t be trusted!

Well he waited for the evidence… now comments

Yeah I don’t think so! Fox News is well known to be controlled opposition, if you don’t know this then you are out of the loop on being informed on certain things!

He said this week, January 6 protesters had a legitimate reason for thinking the election wasn’t legitimate

Yeah this week, not November 4th 2020! A little bit too late and more to my point I made previously!

Proof positive that Fox was and is controlled opposition! Remember that asshole Bill O’Reilly? Now is out talking shit about the 2020 election! 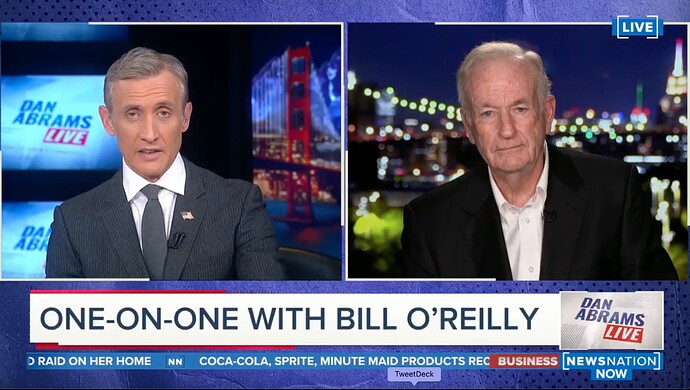 Bill O’Reilly: Fox, Other Networks ‘Play to the Choir and That’s What They’re...

Its not haters, but just a refusal to not be blinded by cult of personality such as Trump. We want leaders who are committed to fixing our country by not playing Machiavellian politics such as what Trump tried to do only to be stabbed in the back in the end by his own party. Like you said he was not a politician and thus got played a lot by the DC game such as traitors like Mitch McConnell. I understand why people like you would want him back due to him showing strong leadership, but lets not kid ourselves by giving him a blind pass for his many successes as he had failures which proved fatal.

The reason why I express a reservation in wanting Trump back is he hasn’t proven to me and many others who look at the issues on a deeper level, that he has learned from his previous mistakes. Endorsing Purdue is a giant red flag to me that indicates of repeating the same pattern by allowing the RINOS in DC to go unchallenged and Purdue is as RINO as they come; something we as a people can not absolutely tolerate anymore if we expect meaningful change to take place to get the country back on track with sound policies again. As Einstein once said, “you can’t solve or fix problems by using the same methods that created them in the first place” something that requires some outside the box solutions which is not in Trump’s tool box.

That is why DeSantis is proving as Governor that he not only has the temperament to take on the DC establishment but the necessary reforms in rooting out the corruption in the institutions like the DOJ, The State Department, the CIA, and the FBI, something Trump failed to do while president. Other issues like voting and immigration reform has to be a top priority which to this day have been issues that Americans care about most, along with having a strong economy, and a secured southern border but continue to be ignored. What Trump got right was his economic policies and for that he did an amazing job in trying to bring back jobs, manufacturing and a America First approach only to cede power back to a illegitimate President who serves China and the Globalist blood suckers who seeks to destroy economic prosperity for the common working class!

Don’t be blinded by your own sentiments that you can’t see what its actually going to take to save the country, something that probably is going to require a much younger person than Trump who will be close to 78 years old in 2024. I am under no illusions at this point in time that such change can actually happen given the current trajectory the country is on, but if it means DeSantis can get us to the promise land of restoring rule of law, a vibrant economy and a grass roots movement on the local and state level, as opposed to an older Trump who is more moderate by design and has shown he can be manipulated, then you bet I am going to advocate for the candidate that give us a fighting chance. Trump had his! Perdue said he wouldn’t certify the election if he was governor. That’s a thousands miles away from a rino. Perdue has a much better chance at winning, then Jones. We all like Jones. But we also need a governor that will win and will not accept fake ballots.

Trump is a calculated man and pay back is on his mind, his new hires will be picked like fine Nebbiolo grapes.

He going to drop the hammer and stomp out any being of communism in America.

We need the speed of deregulation trump would bring. De Santis is a politician I think after year three we might see him make moves. I want speed and death to the enemy. Which trump would bring…

Our culture needs a trump win, we can’t allow democrats to use doj to attack because we think differently. They need to pay. They need to be stomped out

Perdue said he wouldn’t certify the election if he was governor. That’s a thousands miles away from a rino. Perdue has a much better chance at winning, then Jones. We all like Jones. But we also need a governor that will win and will not accept fake ballots.

Yeah hollow words long after he was booed of the stage and failed to win reelection as a senator in 2020, and now he thinks he can be Governor of Georgia? Yeah OK. (Sarcasm) He was also involved in insider trading along with Kelly Loeffler who had a portrait of Mao Zedong on her living room wall. Sorry but you fail to make a convincing argument on the contrary but they are nice dreams on your part, but I seriously doubt that it plays out the way that you just described. As far as Vernon Jones having a chance, he is black and has a way better chance at beating Stacy Abrams who can neutralize the race card than Purdue who is a known RINO and is a white establishment hack who couldn’t carry the black vote, which is why he lost his senate seat to begin with! You are simply not seeing the realistic big picture which is Purdue is a losing gamble!

Perdue like trump is a successful businessman he does not touch Stocks. He has people doing it for him…

I think perdue has a better chance at winning …
btw NO republicans wins if we don’t get Cobb county cheating under control.

Dude you are not going to convince me otherwise while blatantly ignoring the obvious facts that I brought up. It simply can not be ignored! Once a RINO always a RINO! Purdue will lose if he is the Repukes nomination for Georgia Governor! He can’t carry the black vote period and he is already damaged goods. That is a big fat No!

Well Jones won’t get the black vote… perdues the right choice, especially if trump says so

Lets add delusional to the list too shall we? You are pretty thick headed to actually look at things realistically and at least realize the truth! Your confirmation bias is obvious!

Controlled opposition at its best.
He works for the Rothschilds.

Hahahaha……
Another right winger that most PBers have been setting on a pedestal bites the dust.

Hey look its the dipshit asshole clown name Montecrusty is back!