When watching this piece of crap I could not believe the hubris of this jerk! Holy Crap! Is this really happening? Do they really think we are that stupid as to believe this garbage? This is what sociopaths do, they throw their own people under the bus. I never seen anything like this and I swear I must be living in some kind of dream, because this certainly looks surreal! 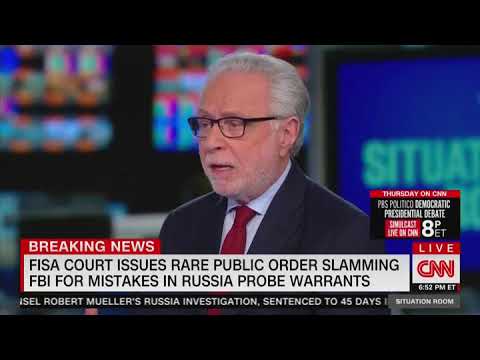 “Jim Comey said it was sloppiness. This wasn’t just sloppiness. These were brutal mistakes, deliberate errors, concealments involving surveillance activities of an American citizen,” Blitzer said to McCabe, now a CNN analyst, in the interview.

Earlier on Tuesday, Judge Rosemary Collyer, who presides over the Foreign Intelligence Surveillance Court (FISC), blasted the FBI for providing “false information” in applications to conduct surveillance against Page.

“Shocked because we all believed, I certainly believed that the procedures we had in place were enough to guarantee that accurate information was going to the court and horrified because it cuts against one of our most fundamental duties and that is to be perfectly accurate and truthful and complete with the court at all times,” McCabe said.

But while McCabe accepted the IG’s findings, he stopped short of taking personal responsibility for the misdeeds laid out in the report. Instead, he said that FBI leaderships’ biggest failure was in allowing lower level FBI agents to have control over so much of the investigation.

“What’s the biggest mistake you made?” Blitzer asked.

The biggest mistake we made,” McCabe began. “The biggest mistake, I think, is the process that was in place essentially left so much responsibility on the lowest level of FBI agents and supervisors involved in a process that once those mistakes are baked in they become very, very hard for the many, many layers of oversight to uncover.”

McCabe’s remarks Tuesday are a stark shift from his comments last week after the report was released. In an interview with CNN’s Chris Cuomo on Dec. 10 , McCabe asserted that the report vindicated him and other FBI officials, such as Comey and former FBI general counsel James Baker.

“I knew that we had not ever done anything wrong, so to see the IG embrace the unavoidable facts of no bias in the investigation, an investigation that was adequately predicated for an authorized purpose, and in fact one that we thought we would be guilty of dereliction of duty had we not begun it, it is satisfying to finally see those words in print,” McCabe said then.

There was never any proof that Russia was involved in cyber interference; nor proof it was any other country for that matter. If there was interference it could have been some kid in his bedroom in Timbuktu - who the hell could possibly know?

You should watch the video! Its really brutal and a case study how a sociopath goes to work!

Wow it sure was brutal. But then exactly the same is going on here - all of our institutions are incompetent at best, and not fit for purpose at worst. WTF is happening to us? I’m finding it all a bit ominous to be honest.

The world is going crazy and the elites are mostly responsible for it!

These two shills along with “lovely” Lisa Page see the writing on the wall. 2020 is going to be a steady drip of eye opening information on this whole cabal’s treason, culminating with Durham completely wrecking their shit. Eyes will be opened (i pray). They are scared and only trying to get out in front of it. More lies and attempted narrative shaping by the MSM and deep staters. I,for one, love to watch em squirm.

Your obviously biased opinion means nothing to me, or any thoughtful individual. This rot went right to the top. 4 renewals based on lies and sloppy investigation signed by your idol, Saint Comey. Probably the most important and controversial investigation ever undertook by the FBI and it was partisan and rigged as hell. Straight up seditious. The truth is near, and i can’t wait to see you and the rest of the left wing partisans try and wiggle and twist facts once faced with it.

What else would you expect???

I guess the text from page saying “POTUS wants to know everything we are doing” is just a vast right-wing conspiracy? The fact that EVERY SINGLE mistake in the whole process went ONE WAY was just a coincidence? You libtards just continue to bury your vapid heads in the sand while your party sets itself on fire. The relatively silent majority sees through this, and we are sick of your shit. Durham is going to light you fools the fuck up. 2020 will be a year that produces far more salty tears than even 2016. Enjoy the show

Bull. They purposely kept this in upper ranks/circle of agents to prevent any possible leaks. To blame the lower levels agents for their conduct is totally BS.

Remember they did that to prevent any leaks precisely of sensitivity of this so-called investigation.

The FBIs top leadership under Pope Comey was rotten to the core. The agents at the bottom of the ladder are not the problem.
Mccabe’s arrogance and failure to admit his actions is repugnant and reprehensible deserving of of hard time in a tough Federal Prison .This man wouldn’t know what ethical conduct is if it slapped him in the face The only thing worse is those make excuses for his actions.

You’re welcome to prove that…

The only thing worse is those make excuses for his actions.

That’s NOT what the IGR says…

Mccabe’s arrogance and failure to admit his actions is repugnant and reprehensible deserving of of hard time in a tough Federal Prison .

I am pretty floored by the fact he has the nerve to act this charade out on CNN. Truly a sociopath!

And then to now work for CNN!!!

I’m basing my opinion on 33 years of government service and knowing how these chains of command operate.

Pardon me for not taking your word on that…