Leatherneck (Jim) had this established in old place but he isn’t here yet. Wanted to add to the content by people sharing anything that has helped on their journey, that could be documentary, books, articles etc.

When Jim turns up we can alter things if he wants to keep charts separate as editing a thread does not appear to be a major headache here.

Feel free to drop in and talk about the markets or anything trading related. There are more than a handful or so of us here who trade currencies (Forex), Indices, Commodities, Stocks etc. We all have different ways to win and different ways to lose

If anyone is considering giving trading a shot, between us here we might be able to make the learning curve a little smoother. Or even some new faces can come and teach some old dogs new tricks.

Don’t want to name the traders who may or may not get involved. I’m sure those that want to, will pop in when time permits.

Jim agreed this would be our trading tune: I’ll get the ball rolling, this documentary has been like a bible to me for years and it is as relevant today as the day it was made. I remember seeing this just a few years ago and thinking:
If this limited screen info was all they had to work from, how easy it should be for us as retail traders to succeed with the amount of info we had on our charts to analyse.

How wrong I was at the time. I didn’t contemplate the inside knowledge they had which has since led to mostly all of the major banks being fined billions for fixing overnight rates along with dealing desk trading that has led to the likes of FXCM being kicked out of the U.S.
And of course the news releases they still have today ahead of time which they are aloud to prepare trades for and release at the news release time.

I am still striving to maintain my 1% per day 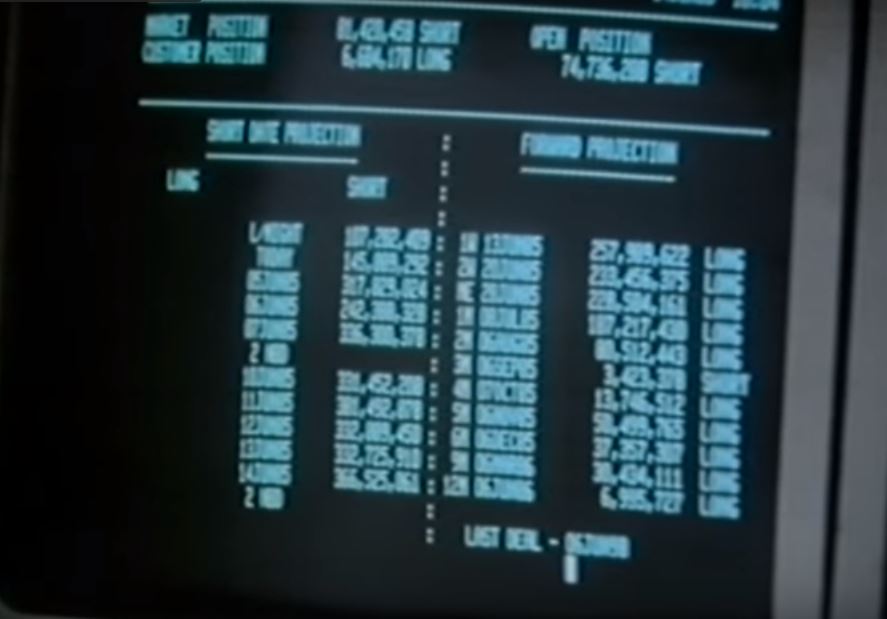 I’ve been learning stuff about the markets myself, and so far here’s some advice that I’ve learned or have been told…

Quality post @heffe - a shining example to be followed.

If this limited screen info was all they had to work from, how easy it should be for us as retail traders to succeed with the amount of info we had on our charts to analyse.

Maybe that has been one of the issues in retail Rob… It’s been flooded with just too much information ?

Are you learning with a view to trade or to invest your own long term portfolio ?
I ask because your list is certainly worth considering but needs to be honed to your specific needs.
If you plan on doing both you need 2 lists IMO, there will be some crossover but the mindset is different, thanks for chipping in

If anything, it’s being flooded with disinformation. I can’t count the amount of times currency news sites have given bad advice/predictions. It wouldn’t surprise me if some of them are owned by banks, or a subsidiary of a bank. Kind of like how supplement companies own those bodybuilding/fitness magazines. Are the products being advertised in those magazines really that great? Is the opinion of the person writing that column really unbiased? Nope. Not a chance in hell. The magazine is bought and paid for. The bodybuilders and fitness models that are endorsing the products, are receiving sponsorships from those supplement companies. Of course they’re going to give a 10/10 review for the product they’re talking about. They’re already bought and paid for.

I stupidly got out of some longs on the USD/CAD back in October. I had a gut feeling it was going to turn around and go bullish. Unfortunately my nerves were shot from holding on to some losing positions for too long, and once I saw a post from Scotiabankfx on twitter saying they thought it was going to go further bearish, I closed off some trades and took quite a few losses. Sure enough, not even two days after I did that, it started to move bullish again. That’s when I said screw it, and have cut out the majority of the information I was taking in before. I’ve found that the price just returns to the same areas over and over again. It’s really just a matter of factoring in a small amount of high impact fundamentals (interest rates, gdp, unemployment, etc.), and paying attention to important geopolitical events. If anyone was shorting the euro when it was announced that Macron was ahead of Le Penn during the french elections. Lol, that weekend gap. That probably killed a few thousand trading accounts.

Great Post 4x. Agree about disinformation and certainly plays a part in the difficulties both new and experienced traders have. I do think the more experience you have the easier it becomes to sniff out the bullshit but it’s not an exact science that’s for sure.

For that very reason I stopped listening and reading everything that is widely considered important. I went through a short phase of wanting to trade the fundis but I found I’m just not wired to interpret it in any meaningful way that I could earn from. Or maybe just too dumb is closer to the truth

That was quite some time ago now and I soon went back to what I knew.

Will dig into a discussion I had recently about risk tomorrow.

Kind of like how supplement companies own those bodybuilding/fitness magazines. Are the products being advertised in those magazines really that great? Is the opinion of the person writing that column really unbiased? Nope. Not a chance in hell. The magazine is bought and paid for. The bodybuilders and fitness models that are endorsing the products, are receiving sponsorships from those supplement companies. Of course they’re going to give a 10/10 review for the product they’re talking about. They’re already bought and paid for.

Worse than that, I used to know some of the guys who posed in those photos (they went to my old meathead gym). They had never taken those supplements and used steroids.

They all use steroids. Even the female fitness models. After looking further into it, I came to the realization that they likely never used what they were promoting. Even if they get famous and can have their own line of supplements, I highly doubt they use that FREAK GAIN 9000 that they promote. They probably just eat about 10 lbs. of chicken and rice each day, and pop dianabol like it’s candy.

Options, shorting, and futures are dangerous things, but still a thing you should read about for times they can be useful, but for a beginner, stay away for now.

Options are not dangerous. Options are just what it says on the tin, the opportunity to do something if you want to. You may have to purchase an option but it is not an obligation to do anything. Options are frequently granted or given to senior company executives in relation to shares (or stock), typically allowing the holder purchase stock/shares at a predetermined price.

BRENT (and oil generally) may be reversing. It bounced at $57.50 and may head upwards.

Had a conversation with a.n. other about why I traded very small time frame with quick take profits.

They told me it really isn’t the best way to trade and very costly too in terms of spread and commissions. To be balanced I said that is fine but I can identify positives and negatives in both short term and longer term trading.

I went on to say the obvious for me

Ok that is as far as I got when a.n.other took offence “what do you mean increased risk, my risk is clearly defined with my stop loss”.

Ok so rather than carry on with the quoutes…

There is more to risk than just considering your SL. The guy gave no thought to time in the market as an extra component to his risk or the fact that the entire balance of his account was at risk.

The time element is obviously increased exposure to the market. The longer the exposure the greater the probability of a catastrophic event happening. Also a catastrophic event can quite literally be a tweet to some accounts. Bare that in mind. I have had trades that have been well away from the market and in substantial profit only to come back to zero due to unexpected breaking news. When force majeure type events occur the reality is your SL may not save you. If there is no liquidity at the level of your SL it will eat through your account until it finds an opposite order match or your account goes to zero whichever happens sooner. There are ways to try and mitigate that additional risk by just having sufficient in the account to cover your trade requirements with respect to SL and margin but even then the salient point is your risk is never just your Stop Loss and since the tighter regulation bringing increased margin requirements, many people have had to have more on deposit to trade the same size they did before the regulation. Again that can be mitigated if you choose to trade in other jurisdictions like ASIC, FMA etc

So whatever way you decide to trade always give consideration to how the market can clobber you.

Normal losses are what they are, normal. All traders have them. Being bludgeoned by the market isn’t normal. There are trader graveyards containing thousands who believed a Stop Loss would be their saviour.

This is not having a go at longer term traders, there are many successful ones out there but clearly the guy I spoke to took it as an attack. I think the attack came because he hadn’t considered the extended exposure is a real component of the overall risk. Obviously Pro long term guys understand that element and have it factored in, they tend to have their profits at risk more so than their hides !

Very interesting thread. I hope to stop by occasionally and absorbe. 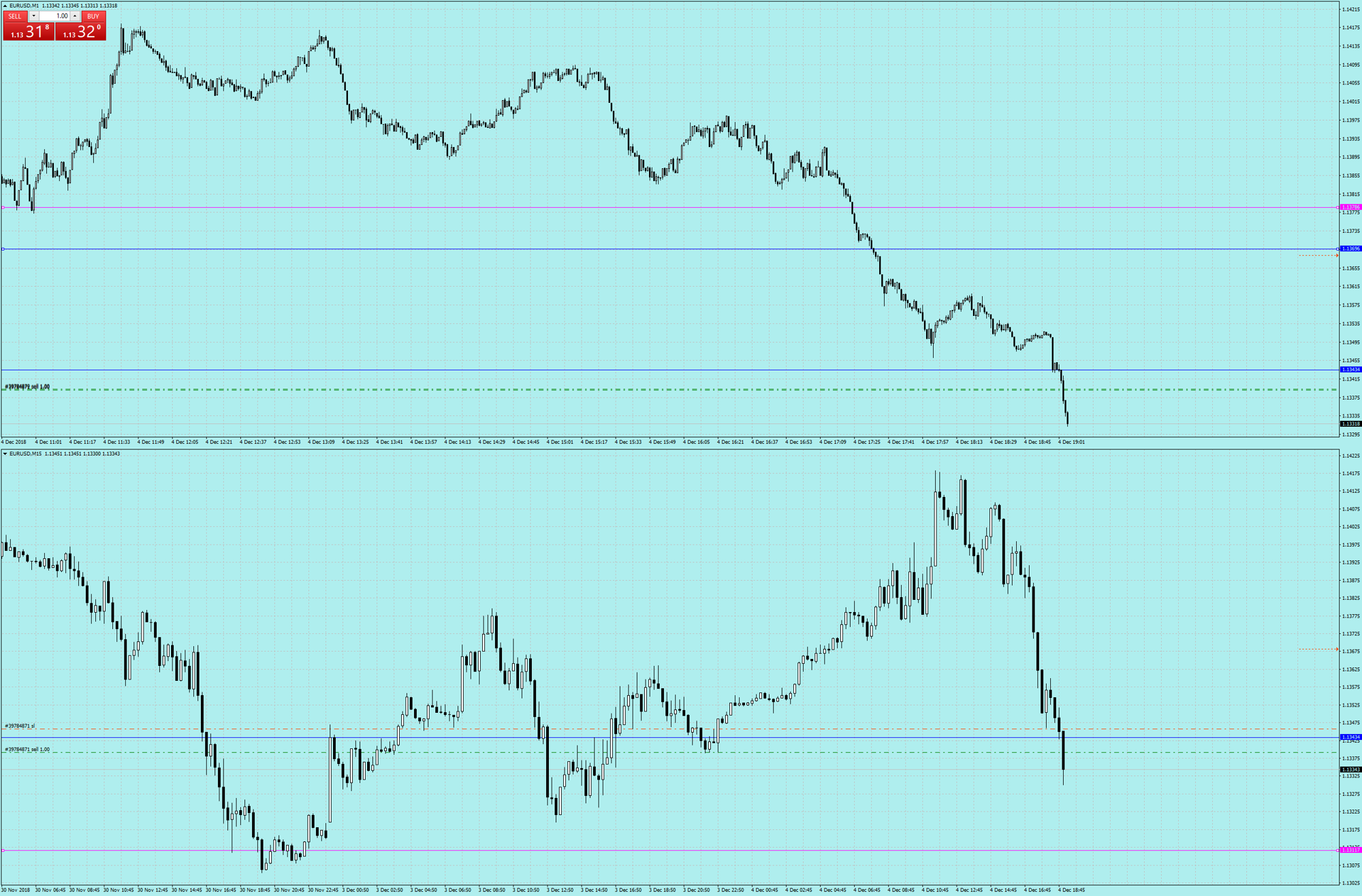 Here we go, 1 minute at the top and 15 minute at the bottom. We can see that we had an uptrend that collapsed on the 15 minute. I missed the previous wedge above the magenta monthly line on the 1 minute chart. We had a similar wedge above the daily blue line so I opened two positions when the wedge broke down and the price pushed through the blue line. I closed one fairly quickly because the price stalled briefly on the 1 minute and put the stop so that the sum of the two positions would equal b/e.

The price has moved down some more so I am at b/e on the second position and I closed the first position for a 5 pip profit. I am currently hoping that the volatility doesn’t take out my stop before the price moves down to the monthly magenta line.

Investing is holding stocks for a few decades, if not literally your entire life

I do have a few that I have had for decades.

All have excellent gains so until I can afford the capital gains taxes i will continue to hold them.

Often referred to as gambling.

Hey Stu! When you feel like talking to Wilson…

There are a few arm wrestlers in this thread.

When I trade FX I am arm-wrestling

When I trade stocks I am ‘investing’. Investing probably has zero leverage (or 1:1). Biggest single-stock win so far in my career, 350% in 3.5 years. Longest held stock, lemmesee… probably around 6 years and only up 50% but it does yield ~7%

Shortest held stock trade about 2 hours, made 9%, can’t remember who it was and it was a few years ago…
Biggest win … 900% in 2 months, but unfortunately I only bet a large lunch…