This girl has stones! Two can play this game biatches!
Look out squad! Real American women coming through! 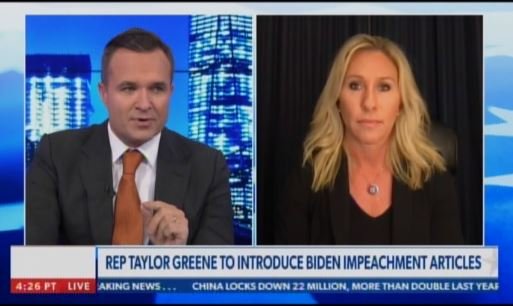 Freshman Republican Rep. Marjorie Taylor Greene (R-GA) announced on Wednesday night she will introduce articles of impeachment against Joe Biden on January 21, 2021 over his abuse of power. Biden’s son Hunter Biden is currently under investigation...

Wait a minute.
Is she expecting Biden to become President?

Something is fishy there.

Expecting? Unfortunately the courts, and mike pence failed us, so now it’s time to laugh at Democrats

I don’t know much about Pence but he did what he was expected to do.

He took the bullet, so to speak, in preparation for the actions in the Trump Team playbook.

Pence could have kicked electors out

But that would make huge arrests impossible…
(Because then the Americans would be happy and it would be the end of the story. It’s not about Donald Trump anymore but about the Constitution, as General Flynn says)

This is really important because it puts the black cloud of this election fraud squarely over this administration and signifies that it will not be going away. To look at it from another angle, when Harris ran for President she hardly got to 1% of the vote and it was clear most Americans including Democrats did not like her. Now she is next in line to become President by way of fraud? Think about that for moment.

Democrats can’t wait to say we have the first black female president, who no one likes lol

I suppose the term conspiracy may apply only loosely.
Because there’s nothing illegal in the Trump Team playbook. They are dropping baits all over and the agents of the Deep State are biting like crazy.

Did the Trump Team expect the melee in the Capitol building on 1-6?

There definitely were guys who were disguised as antifa (who disguised themselves to be Trump supporters) and stole Pelosi computer(s) still open.

Trump obviously made the tweet ahead of 1-6 to go home peacefully, so his team had expected something to happen.

I’ve been hearing about this laptop since the sixth who exactly is he going to give it to the department of justice? For FBI? A judge?..

We don’t know what’s on these computers but one thing that came out of them is the involvement of the Vatican in the election steal via the Leonardo da Vinci satellite.

Nothing is going to happen… republicans laid down.

Last time I check, Senate and House are on the other side. And lets just say that somehow this got thru, and Biden is impeached. Then what, President Harris?

You’re realizing that republicans are doing the dirty work for the dems on this move right?

Its a symbolic gesture more than anything.

The most unpopular Congress impeached the most popular president.

Yes, and I suspect there will be many more instances where certain people stand up. IMO many are going to be gnashing their teeth when they are ultimately rejected. Liz Chaney just committed political suicide as one of latest examples. The GOP in particular are in a lot of trouble and they know it. It’s seems to me they think they can be duplicitous in their loyalties by appeasing Democrats and Tom snake in the grass sell out your country Donahue from the COC. This treasonous POS threw his support behind the Democrats which forced McConnell to hand the Georgia elections and the Senate majority to the Democrats. There is going to be a price to pay for that!

What’s funny is that you don’t…