What Happened: The Libyan National Army led by Khalifa Hifter said on April 6 that it had taken control of the disused international airport in Libya’s capital Tripoli, two days after Hifter ordered his forces to seize the seat of Libya’s U.N.-backed government, AP reported. Meanwhile, the United Nations’ envoy to Libya insisted an April 14-16 conference on possible new elections would go ahead as planned.

Why It Matters: Libya has been torn by factional conflict and instability since Moammar Gadhafi was deposed and killed in 2011. Hifter’s offensive could plunge Libya into another period of violence and anarchy, and thwart the latest U.N. efforts to forge a political resolution.

Background: Rival authorities govern Libya: the internationally backed government in Tripoli and the government in the east, which Hifter is aligned with. Each is backed by an array of militias. 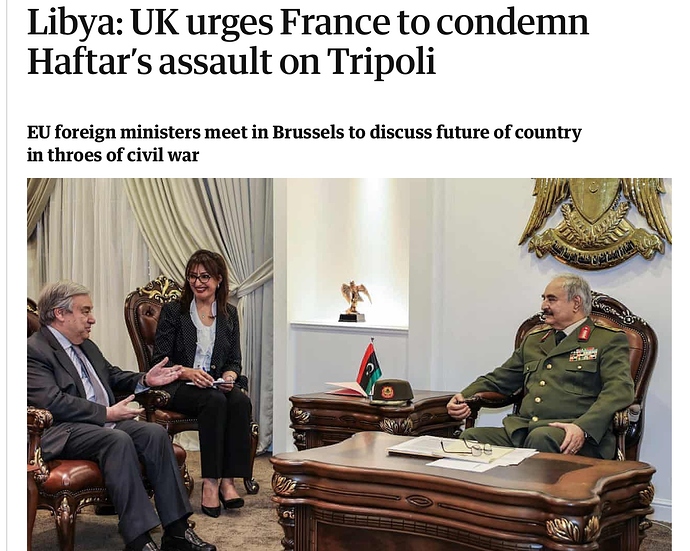 Close to 90% of Libya is controlled by General Haftar, who is secular and has overseen the rebuilding and stabilization of most of Libya.

The only safe haven for Islamists, criminals and human smugglers remain in a few surrounding areas outside of Tripoli. The “internationally backed UN government”, which is un-elected, has virtually no power there, and has used UN money to bribe warlords, local tribes, and ISIS linked Islamists to keep them in power.

Why in the world would the UK back that failed Islamist friendly Tripoli government… that is un-elected and not legitimized… over General Haftar who has proven he can stabilize Libya and make it a prospering country again?

Why in the world would the UK back that failed Islamist friendly Tripoli government… that is un-elected and not legitimized… over General Haftar who has proven he can stabilize Libya and make it a prospering country again?

Because the governments of the world generally do not have the best interest of the people in mind.

over General Haftar who has proven he can stabilize Libya and make it a prospering country again?

Who was it that helps destabilize the Libyan government?

Why it was that US, the country that interferes in government across the world.

What is strange about the Libya situation is that Qaddafi was just starting to re-align with the West. Then for no reason Obama and Hillary pushed their color revolution to destabilize the region. That destabilization led to the refugee crisis that we see today in Europe. The right heads just never seem to roll.

The same question applies to Egypt. Why would w destabilize Egypt an ally and American friendly country.?