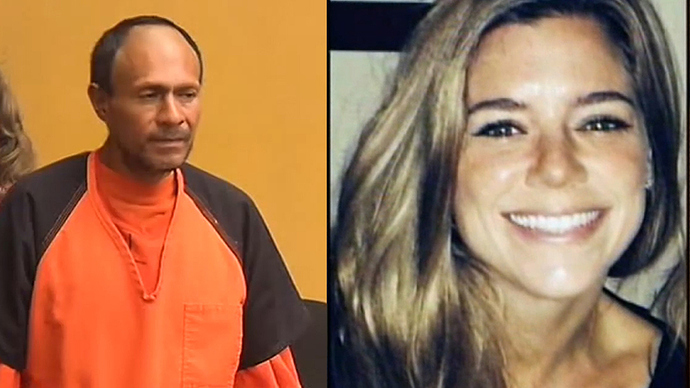 This family will get no justice and have no peace. RIP Kate Steinle. Your death was needless and the suffering and humiliation of your family continues so many years after your tragic and avoidable death.

A California judge threw out the lawsuit from the parents of Kate Steinle who claim the federal government was liable in her death by an undocumented man because the weapon used in the shooting belonged to a U.S. Bureau of Land Management ranger who reported it stolen from his car parked in San Francisco, according to reports.

“Aside from the fact that the stolen gun was used, there is no evidence that the shooting was in any way connected to the theft,” U.S. Chief Magistrate Judge Joseph C. Spero wrote in his 14-page ruling.

The San Francisco Examiner reported that Spero said it was feasible that “the thief walked half a mile and left the gun where [Jose Inez Garcia-Zarate] found it three and a half days later.”

“It is equally consistent with the evidence in the record, however, that the gun could have passed through the hands of any number of other people, and traveled throughout the San Francisco Bay Area or beyond, before ending up at Pier 14,” Spero wrote.

Spero continued: “Even if the gun was taken directly to Pier 14 by the thief and left there until [Garcia Zarate] found it days later, that separation in time, space, actors, and conduct would be sufficient in this court’s view to break the chain of proximate causation between [Bureau of Land Management ranger John] Woychowski’s purportedly negligent storage of the gun and Steinle’s death.”

Garcia-Zarate, an illegal immigrant, was acquitted in November 2017 of first- and second-degree murder, involuntary manslaughter and assault with a semi-automatic weapon in the death of Steinle, who was walking on the pier when she was struck by a bullet in the back in July 2015.

Garcia-Zarate claimed he unwittingly picked up the gun wrapped in a T-shirt, and it fired accidentally. The bullet ricocheted off a concrete walkway and struck Steinle, who was with her father and a family friend.

The Mexican citizen, who had been deported five times, was convicted of one count of being a felon in possession of a firearm.

The 1st District Court of Appeal in August overturned the gun conviction because the judge failed to give the jury the option of acquitting Garcia-Zarate on the theory he only possessed the weapon for a moment.

“The state court ruling has no legal effect on the federal prosecution, which will continue,” said David Anderson, U.S. attorney for the Northern District of California. “A repeatedly deported, previously convicted felon has no right to possess a firearm under federal law, even if California extends him sanctuary.”

His trial on federal gun charges is scheduled to begin next week.

“We are disappointed in the ruling,” Alison Cordova, an attorney for the family, said in an emailed statement. “We respectfully disagree with Judge Spero, and we will be filing an appeal.”

Steinle’s parents had named the federal government as a defendant in their lawsuit because the ranger had allegedly left the gun in plain view in an unlocked car on a downtown street.

Garcia-Zarate, who was facing deportation proceedings at the time of his arrest in the killing, had been released by county jail officials three months before the tragic event.

The case drew national attention because of Garcia-Zarate’s immigration status; it became a rallying cry for supporters of tougher immigration policies.

A California judge threw out the lawsuit of the parents of Kate Steinle claiming the federal government was liable in her death because the weapon used in the shooting belonged to a U.S. Bureau of Land Management ranger who reported it stolen from...

I live in Cali. Every day I pray for a 10.5 quake to strike Frisco and sink it to the bottom of the ocean.

Trash news from a trash state. Anything coming out of Commiefornia is guaranteed rage-baiting at this point.

You have got to be kidding me with this crap! California nullified this girl’s murder, let the killer walk, and now they are going to further rub it in the parents’ faces that their daughter was killed and they won’t get any sort of justice!?! This is a disgrace!

All liberal judges should be forcibly removed from office.

If that happens I hope that you are spared!

Can anyone imagine if the situation was reversed.

I want that family to find justice somehow, somewhere.

Making gun owners liable however for crimes committed with firearms stolen from them however is one of the goals of the anti gun left.

Many people would be afraid to exercise their 2nd Amendment rights out of fear of potential liability.

Extend this forward to other property like your car and it gets astronomically worse.

I feel for the family here but our rights are more important.

Two of many many lists; and the deaths of all these innocent humans could have been prevented. 1. ## Victims of Illegal Aliens Memorial - OJJPAC.org

Making gun owners liable however for crimes committed with firearms stolen from them however is one of the goals of the anti gun left.

Liberal 101; Don’t blame the thief, blame the law abiding legal owner. I guess if some greasy unwashed primitive steals a car & kills someone, the legal owner is responsible.

Gotta start somewhere. Finish the wall - fence. Then, if you enter our country anywhere other than at a legal monitored point - port of entry, YOU WILL BE SHOT ON SIGHT. Moving on, bring our troops home, and start a pick up & remove illegal alien blitz. It can be done.