Why doesnt Hollywood choose the Pope to host the Oscars?

Kevin Hart has announced he is stepping down as host of next year’s Oscars ceremony following an outcry over perceived homophobic comments and tweets from the comedian.

On Friday Hart posted an apology to the LGBTQ community on Twitter for his past “insensitive words” and confirmed he would not take on the gig, so as not to be a “distraction”.

“I have made the choice to step down from hosting this year’s Oscars,” wrote Hart, who as well as his stand-up work is the star of films like Ride Along and Jumanji.

“This is because I do not want to be a distraction on a night that should be celebrated by so many amazing talented artists. I sincerely apologize to the LGBTQ community for my insensitive words from my past.

“I’m sorry that I hurt people. I am evolving and want to continue to do so. My goal is to bring people together not tear us apart. Much love and appreciation to the Academy. I hope we can meet again.”

Just hours earlier, Hart, who is currently in Australia, posted a video to Instagram saying he had received a call from the Academy telling him to apologise or he would be removed as host.

In the video, Hart said he would not apologise.

“Regardless, Academy, I’m thankful and appreciative of the opportunity. If it goes away no harm no foul.”

It was announced on Tuesday that Hart would host the Oscars ceremony in February 2019, which is considered one of the most prestigious but difficult jobs in showbusiness.

“I am blown away simply because this has been a goal on my list for a long time,” Hart wrote on his Instagram page.

Hart would have been one of a few black Oscar hosts in the event’s history, after Chris Rock, Whoopi Goldberg and Sammy Davis Jr.

However, the choice quickly prompted a backlash after a significant number of Hart’s tweets in which he used homophobic slurs were re-posted on Twitter. A video from a 2010 standup special in which Hart delivered an extended joke based on the fear his three-year-old son would be gay also resurfaced.

These remarks were made something like 10 years ago, & Mr. Hart had long since apologized. Kudos to him for declining to participate rather than yet another apology.

Am getting very sick & tired of having to read the first two lines of the Miranda Warning before anything said about a group that makes up a tiny minority of the U S population. And some of them don’t even support militant behaviors & demands, like rainbow

flags & stickers all over every gosh darned thing. Not all were even in support of same sex marriage, but must defer to the minority within the minority who want it.

Can’t refuse to photograph or provide anything for such an event. That’s it, I’m moving to my husband’s 99% Muslim majority country where gay folk remain single & keep that aspect of their lives to themselves.

Kevin Hart black-listed by Hollywood for saying this: “I do not support gay marriage. Marriage has religious and social connotations, and I consider marriage to be between a man and a woman.” Just kidding. Barack Obama said this in 2008. Why hasn’t the left disowned him yet?

Well the Kavanaugh 's Confirmation Hearings must have sent you in a tailspin !!!

Kevin Hart made those remarks something like 10 years ago, & the 36 years Kavanaugh’s accuser waited to come forward were way too late.

I don’t support either the whiny crybabies that want all things GLBTQ supported, nor the Kavanaugh accuser.

i say cancel the oscars period, no more awards since hollywood libs and leftists tells everyone that we are all equals so either give the oscars to every actor/actress or give no one an oscar then we will have equality

I guess this means blacks are on the bottom in the diversity olympics. The ■■■■ are on top.

Kyler Murray is going through the same as Kevin Hart. At age 15 he used the word queer in a tweet and now since he won the Heisman trolls have uncovered the tweets and are making his life a living hell.

My thoughts are this. Has Kyler Murray and Kevin Hart changed their views on gays or are they caving to the scrutiny to avoid further issues?

Has Kyler Murray and Kevin Hart changed their views on gays or are they caving to the scrutiny to avoid further issues?

We as a society or tolerating this bad behavior. I don’t blame them for publicly shifting their views to ease the pressure. We should be publicly shaming anyone who tries to destroy a person based upon their views. Those people deserve to be destroyed. We should be going after them publicly and harassing them non-stop.

Best bet is more heterosexuals complained then members of the gay community. 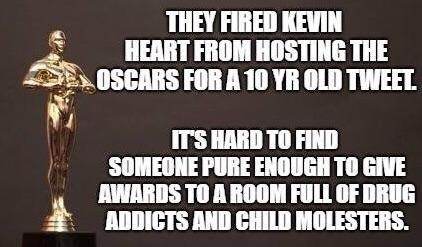