To wit, during an end-of-year interview with Global News, the Canadian leader accused President Trump’s ‘racist’ immigration policies of provoking a worsening immigration crisis in Canada, as more immigrants seek to flee north, fearing a ‘hostile, anti-refugee’ climate in the US. When asked what he believes is to blame for the worsening crisis, which this year led to the Canadian government putting asylum applicants up in 3 star hotels after shelters - including one in a stadium in Montreal - filled to capacity, Trudeau said it was Trump’s policies, not Trudeau’s infamous 2017 tweet advising migrants that Canada would offer safe harbor to anybody fleeing persecution, that inspired thousands of migrants to flee north from the US into Canada.

Put another way, if you criticize Trudeau and his fellow virtue-signaling liberals then it is YOU who is a racist. This moron is going to see his very own Yellow Vest protest in due time. Many of us here in Canada have had it with this idiot and unlike Europeans, we are armed. 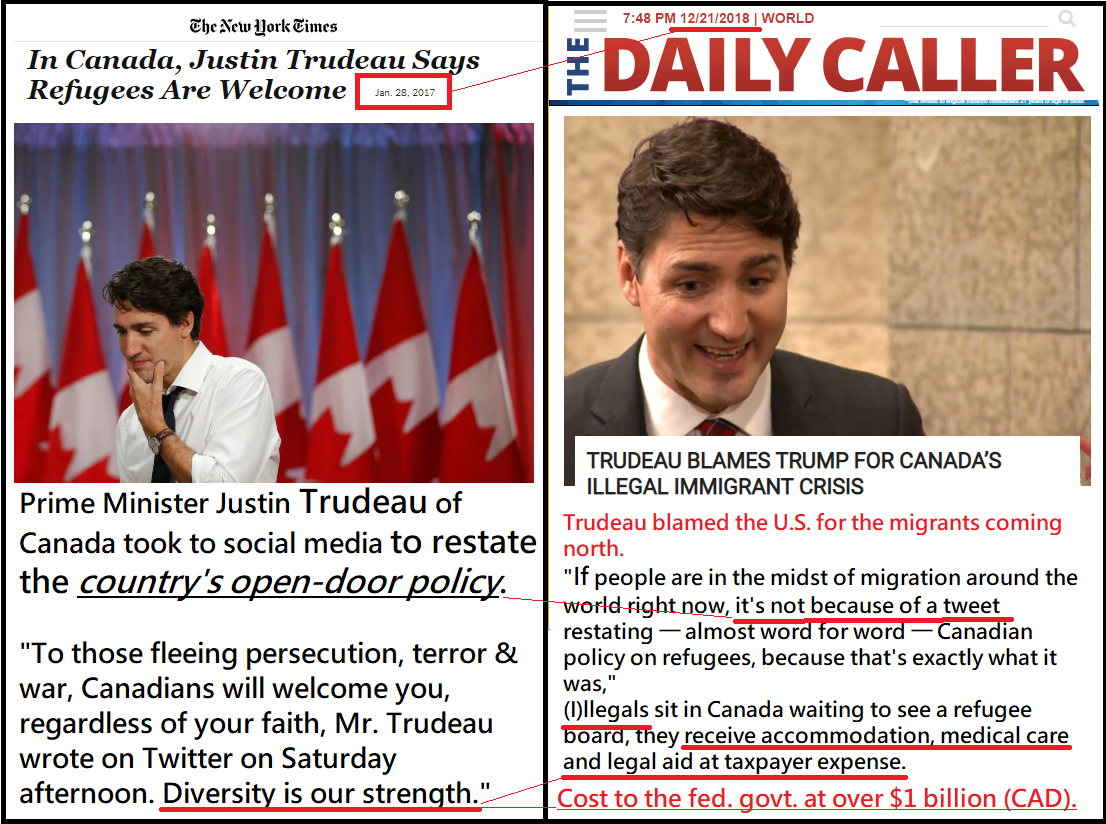 I think it’s a brilliant tactic, to be honest…these globalist elites don’t care about anyone but themselves, and remember, projecting is their best tool, diverting blame somewhere else is another one of their great tools, you have to admire the u-turn on this…this is psychological warfare…think like a sociopath, and you can beat them at their own game.

How can immigration be called a crisis if you are not a racist? Didn’t he welcome them with open arms? He’d better stick to being happy and welcoming lest he find himself called a racist by his own definition.

Trudeau was the one who demanded totally uncontrolled immigration into Canada. I thought diversity was our strength? How could it possibly be a crisis?

you have to admire the u-turn on this…

I don’t have to admire anything at all. I certainly don’t admire leftist assholes that blame everything on someone else. That is a common tactic of the left…accuse others of what you are doing.

A person who is not a sociopath cannot even begin to fathom what thinking like a sociopath entails.

The more entertaining thought is: “when liberalism is slapped down by reality”

Shouldn’t he be thanking Trump?

He should be unless he has become a ‘racist’ too?

The hypocrisy should boggle the mind.

How can there be an immigration “crisis” in Canada? After all it’s Trudeau who insisted immigration is a right and that we should all welcome them with open arms.

I hope Canadians are smart enough to send his ass packing in the next election.

But the New York Times appears to have forgotten. I found no mention of this in a search of NYT… albeit a quick Google search.