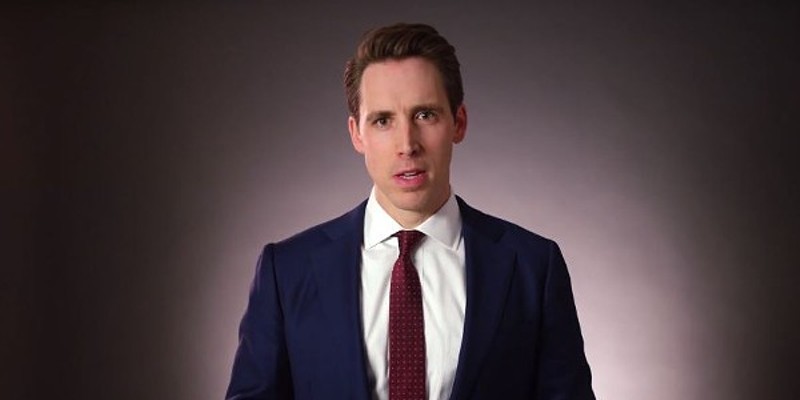 Read his full speech below:

Mr. President, it is an honor to rise today to speak in this chamber on behalf of the people of Missouri.

When I think of those who have served my state here before me, I am humbled.

And when I think of the true and strong Missourians who have sent me here, I am sobered. Because to represent them will be a great responsibility indeed.

I pledge to my fellow Missourians that I will work at this task with all the strength that God can give me. And I will serve without fear and without favor to any man.

We Missourians are known for our frankness, and today I will be frank. Because this is a moment of great need for my state and for our nation.

For this nation was born in a revolution by We the People, and premised on a revolutionary faith: that it is the people, the common man and woman, who make democracy work.

And it is the calling of every generation to renew that revolution for their day.

But in our time, our revolutionary faith is faltering. And in the heartland of this country, the great challenge of our age is unfolding.

And though it is humble, it’s a place that reflects the dignity and quiet greatness of the working man and woman.

These are the people who explored a continent, who built the railroads, who opened the West. These are the workers whose labor launched the Industrial Revolution and whose ingenuity made the American economy the marvel of the world.

These are the families who have rallied to this country’s flag in every hour of danger and who bear the burden of defending our nation even now.

These are the patriots who man the fire department and coach the Little League.

These are the generous who give $25 a month out of their gas money to assist people halfway around the globe they will never meet just because they believe in helping others.

They don’t ask for much, and they live by a simple creed: give the best of yourself to your family, your community, and your fellow man.

And America is a place of promise, because in these hearts, honor lives.

But these working men and women are confronting crisis today. And as they do, so does our democracy.

After years of sacrifice, the great American middle is being pushed aside by a new, arrogant aristocracy. The new aristocrats seek to remake society in their own image: to engineer an economy that works for the elite but few else, to fashion a culture that is dominated by their own preferences.

When they think of helping their fellow citizens, they think of making everyone else more like themselves. And Washington – Washington has just gone along. This town has embraced a politics of elite values and elite ambition rather than building opportunities to thrive in the great and broad American middle.

This has left middle America—the great American middle class—under siege: battling the loss of respect and work, the decline of home and family, an epidemic of loneliness and despair.

This is the crisis of our time.

I’m afraid you wouldn’t know it to listen to the talk of this town much of the time. As the crisis deepens, the political establishment looks the other way, rehearsing and rehashing the political debates of thirty or forty years ago.

But there is no time for that any longer. The twenty-first century is upon us. And the great struggle of this century can no longer wait.

The crisis that we face goes to the heart of our revolution.

And that change comes not through spectacular feats of daring or glory, but through everyday work and everyday sacrifice and everyday acts of courage and love.

And so it has been the proud working people, our farmers and mechanics and teachers and tradesmen, who have defined the character of this country.

But for too long now, neither our economy nor our culture has lent them much support. Instead, our policy makers have entrenched the new elites and undermined the way of life that once bound this country together.

It’s time to face the facts. Over the last forty years, our economy has worked best for those at the top: the wealthy, the well-educated. If you have a job in Silicon Valley or an expensive and prestigious degree, this economy has worked for you.

And Washington has focused on how to get more people to join this elite.

This is no accident. The people who make the rules now, who run our large corporations, who set the tone for our popular culture, all belong to the same class. This economy has been their economy. They made it for themselves.

But in places like the one where I grew up, in middle Missouri, good-paying jobs that you can raise a family on are going away.

The jobs go overseas or south of the border or to cities on the coasts. And once-vibrant towns decline, taking with them the network of schools and neighborhoods and churches that make up middle class life.

Rural America has been particularly hard hit. Rural Americans’ life expectancy has not just leveled off, its actually dropped, and for women without a high school degree, that drop has been staggering.

In some rural places, residents struggle with outright deprivation. My home state contains some of the poorest counties in America, all in rural places that once boasted thriving small towns. As those communities struggle, want sets in.

But the crisis reaches well beyond economics. The message that Washington has sent our whole society is loud and clear: our elites are the people who matter—and those who aspire to join them. Everyone else is unimportant or backwards.

And millions of Americans are left with the sense that the people who run this country view them with nothing but contempt and value them as nothing but consumers.

These trends tear at our country’s social fabric, and they undermine our common ethic of citizenship.

Because being a free person, being an American, isn’t just about what you can buy.

It’s about the pride that comes in supporting a family. It’s about contributing something of worth to your community. It’s about being able to look a neighbor in the eye and know that you’re his equal.

It’s about respect. And too many Americans haven’t been getting it.

They’re certainly not getting it from our cultural elite. The media, Hollywood, academia relentlessly press their values and their priorities on the rest of us.

They advocate liberation from the duties of family and tradition. They look down on the plain virtues of patriotism, self-giving, and faith. They idealize fame and preach self-realization through consuming more stuff.

And as they do, they assault the foundations of the great American middle.

Perhaps we shouldn’t be surprised, then, at the epidemic of loneliness and despair that is spreading across working communities.

Fewer young people are getting married or starting families.

Drug addiction is surging. The opioid menace has ravaged every sector, every age group, every geography of working people. And it’s not only pills. Heroin, cocaine, fentanyl, meth, and of course marijuana, have flooded our streets and our homes.

And everywhere, deaths of despair are mounting—among farmers, among the young.

Most shockingly, the young are the hope of our society, but in America today they are taking their lives in numbers never seen in our history. The well-off frequently note that our nation has never been richer, but the tragedy of youth suicide betrays a profound poverty of hope.

And is that really so surprising? Today’s youth must make their way in a society increasingly defined not by the genuine and personal love of family and church, but by the cold and judgmental world of social media.

The typical young person is bombarded by video games and violence and the relentless status-seeking imposed and modeled by our cultural elite.

The chattering class often tells us that all of this—the jobs, the despair, the loss of standing—is the result of forces beyond anyone’s control. As if that’s an excuse to do nothing.

But in fact, it’s not true.

Today’s society benefits those who shaped it, and it has been shaped not by working men and women, but by the new aristocratic elite.

Big banks, big tech, big multi-national corporations, along with their allies in the academy and the media—these are the aristocrats of our age.

They live in the United States, but they consider themselves citizens of the world.

They operate businesses or run universities here, but their primary loyalty is to their own agenda for a more unified, progressive—and profitable—global order.

These modern aristocrats often claim to be a meritocracy. And many of them truly believe they are. What they don’t see, or won’t acknowledge, is that the society they have built works mainly for themselves.

They’ve effectively run this country for decades. And their legacy is national division and national decline.

Mr. President, it is time to reclaim our revolutionary heritage and reassert the democracy of We the People.

To those who despair at the task ahead, I say the hour is not too late, the crisis is not too deep for the determined effort of a great people.

And to those who feel forgotten and unheard, I say this is your time.

Now we must stand together to renew the promise of our enduring revolution.

We must put aside the tired orthodoxies of years past, and forge a new politics of national renewal.

And so, we need not just a bigger economy, but a better society.

We need a society that offers rewarding work for every worker who wants it, wherever she is from, whatever degree he might have, whether their ambition is to start a business or to start a family.

We need a society that will allow towns and neighborhoods to flourish across the great heartland of this country, not just in the mega-cities of the coasts.

We need a society that puts American workers first, that prioritizes them over cheap goods from abroad, and offers them the chance to better their station.

All this we must fight for and more.

We need to repair the torn fabric of our common life. We need a politics that prioritizes strong marriages and encourages strong families, where children can know their parents and be nurtured by their love.

We need strong schools and churches and co-ops.

Because these are the things that make liberty possible.

For liberty is more than selling or buying or the right to be left alone. Liberty is the ability to master our own fate and as a free people, to set our own course.

That’s the promise of the American revolution. And we will renew it for our day.

Washington has ignored the need for this renewal for too long. It has rested easy with the priorities of an earlier age. Now it must wake up and face the facts of this day.

We will make it the work of this generation, and so do our part to see the success of liberty in our time.

“It’s just incredible, the extremism that we’re seeing and I think you are seeing and these states are responding,” said Josh Hawley.

And it will continue for many more generations before us.

If I didn’t know any better I would have assumed that he was talking about everyone’s favorite tribe.

Nationalism is a dead philosophy. It only leads to endless war as nations fight for supremacy. What a nightmare.

The world can become one if we work together to cure stupidity and make everyone intelligent.

OK… you give up your beliefs and way of life and agree to whatever I say. Ya know… for peace and unity.