Joe Biden Is Just an Idea

He’s a suggestion imbued with an infinite number of possibilities. He can be anything you want.

Lostin the blinding gaslighting over Donald Trump’s remarks about white supremacists during the first presidential debate was the fact that Joe Biden proved again that he’s little more than a stand-in propped up by a compliant political press.

Biden was unable to answer even the most rudimentary queries about his beliefs, never mind specifics about policy. Apologies to the Twitter expert class, but opposing Donald Trump is neither a moral doctrine nor a policy agenda.

There is plenty to dislike about the president, but you rarely have to guess where he stands. Biden, on the other hand, says “I am the Democratic Party,” and yet, after a half century in American politics, we have virtually no idea what his presidency would look like.

Biden’s already put a lid on his past, and the press has obliged. The same reporters who will comb over 15 years of Trump’s tax returns have shown zero curiosity in nearly 40 years of Senate papers Biden has buried somewhere in a University of Delaware basement. Then again, there’s not a single significant piece of legislation Biden sponsored in his36 years in Senate that he still supports, so maybe it doesn’t matter.

Thanks to the media, though, I know more about some flaky QAnon candidate in Georgia than I do about the presidential frontrunner’s foreign-policy positions. Or much else. If Republicans were threatening to destroy the constitutional order by packing the courts and throwing out the legislative filibuster — one that Biden’s mentor Barack Obama once arguedwas an indispensable tool of a representative democracy — there would be massive pressure on the head of the party to stake out a public position.

This, incidentally, isn’t a case of forcing Biden to answer for the ravings of some fringe activists — as the media is constantly demanding Republicans do. No, the Senate Minority leader Chuck Schumer continues to tell usthat “everything is on the table” if Republicans confirm Amy Coney Barrett using the prescribed method provided by the Constitution. Voters don’t even know if one of the candidates will blow up the integrity of the American court system in retaliation. I’m not sure there has ever been a comparable situation in post-war American politics.

Instead, we hearhow Biden’s feckless opportunism is moderation. Biden himself likes to drop a prefabricated line contending he was the one who beat Bernie Sanders, signaling to moderates that his candidacy prevailed over extremism. Why would someone whose campaign stemmed the scourge of collectivism co-sign a 110-page Menshevik-Bolshevik Unity Pact?(I exaggerate only slightly.) Maybe when Chris Wallace is done digging into the vital right-wing militia matter, he will investigate.

In the past when candidates made outlandish promises to their base during the primary, they would move back to the center. There is no center anymore. There is only Trump. And because of the press’s abdication of basic professionalism, Biden, the empty vessel, can concurrently hold any position that suits you.

It was Trump, for example, who brought up the Green New Deal during the first debate — the massive multi-trillion-dollar attack on, yes, cars, airplanes, your food, your house, and modernity in general. Biden casually claimed that it is “not my plan,” though it says, quite unmistakably, in his “ Plan for Climate Change and Environmental Justice” that the Green New Deal is the “crucial framework for meeting the climate challenges we face.” Instead of fact-checking Biden, the same Washington Post that once ran a headline that read, “Joe Biden embraces Green New Deal as he releases climate plan,” corrected Trump , assertingthat, “Biden has never supported the Green New Deal.”

Rinse and repeat on fracking and “defunding the police.”

The media’s greatest coup in 2020 was turning months of widespread leftist violence into a debate over a few hundred far right-wing Proud Boys. Trump’s messy answer on the matter — in which, yes, he denounced “white supremacists” for the umpteenth time — made all the front pages. Biden can label Antifa, the leftist movement responsible for the majority of violence, looting, and arson over past few months, nothing more than an “idea,” and see no blowback, at all.

It was an interesting metaphor, because Joe Biden in 2020 is just an idea — a suggestion imbued with an infinite number of possibilities. Joe can be anything you want. What will the reality look like? I don’t know. You don’t know. He doesn’t know, either.

Outstanding summary! Pretty much a succinct characterization of what the truth of Biden is.

The I am everything to everyone campaign.

Right.
The agenda is to keep the rioting going, even after the Biden win, God forbid.

Should that happen, they gonna keep rioting, demanding Biden resign and the Harris woman take his place.

What is pretty funny is he said absolutely nothing about his policies or what those policies are going to be.

All of the power of liberals rests on the ability to call the police.

What do they have without a police supportive of liberalism?

Turn the police anti-liberal and the liberals will fold to the first bitch slap they receive.

Let them call police when it’s sharia police who show up.

They will just enforce another bitch slap on the liberals.

nothing about his policies or what those policies are going to be.

The policies will be whatever the last person told him they would be.

Vice President Biden had no problems articulating his policy positions during the previous debate. If you recall, it was President Trump who was completely unable to articulate anything of substance.

Joe Biden is the next president of the United States.

Yeah what policies were those? When pressed to give specifics he failed to provide anything of substance! Sort of like you and your responses to people here whom you disagree with, you like to make a statement then fail to defend it with an actual cogent argument that allows for any meaningful discussion to take place. I think you are afraid of failing to defend such beliefs which is why most of you post and run away! You simply can’t have those confirmation biases challenged, it’s what gives you meaning when you wake up in morning.

Now this is a real President. Wear a fucking mask. 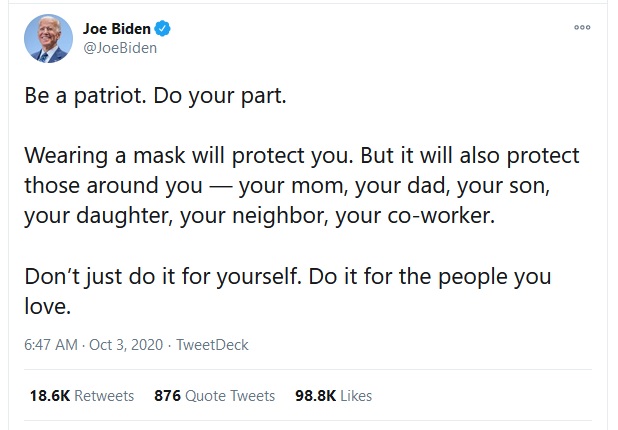 Joe Biden is the next president of the United States.

Keep smoking that chit! The best thing about your statement is knowing when Biden loses you will never show your ugly face here again! Win win!

Why debate did you listen to???

He didn’t state one policy position the entire night.

If elected he will certainly resign within the first year as he cannot continues to use the drugs he was on during the debate. Did you look at his even look at his eyes during the close up face shots???

Some of us do not need to wear a mask as we are not in cesspool cities.
Like every democrat and you all assume incorrectly the nation is just like the cities which it isn’t.

Showing your level of idiocy again! The fact there is no scientific evidence to support that masks work yet morons like you still want to advocate for wearing them proves what a dumbass you are and why no one should listen to you. The party of stupid couldn’t be overstated! Seems fitting that stupid people vote for even dumber people!

There have been extensive randomized controlled trial (RCT) studies, and meta-analysis reviews of RCT studies, which all show that masks and respirators do not work to prevent respiratory influenza-like illnesses, or respiratory illnesses believed to...

The party of stupid, where stupid people vote for clowns like these!

Does anyone here speak Bidenese?

All the bullshit riots this summer and we’ve still got globalists and neo-cons bitching over Biden’s crime bill in the 90s as if being tough on crime is a bad thing.

These people are so attached to their racism mythology they are detached from reality.

And we have a county filled with young idealists that are completely clueless the thy are being manipulated.