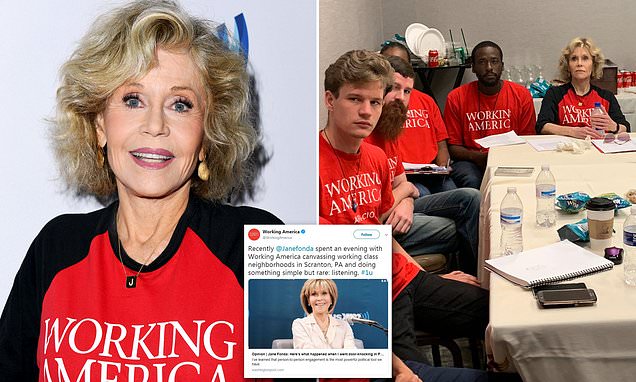 Actress Jane Fonda, 81, canvassed door to door in Scranton, Pennsylvania on August 4 to educate local voters in the swing state, saying 'We can win back our country one conversation at a time.'

More related: I wish Trump was also a hard charging Origionalist and not only a the best pro-life POTUS in a long time … though that alone is pretty darn good!

Traitor bitch! Should have been shot at dawn 50 years ago.

No one give a fuck what this old entitled communist twat thinks.

She thinks because she acted in some movies that people care what she thinks. That’s the sad truth about people in Hollywood. They really think we care what they say or think or believe. But we don’t!!! They are the equivalent of court jesters and they only exist for our entertainment.

Would be hilarious for some Vietnam Vet. to follow her door to door to remind locals that she’s an unrepentant traitor.

That old crab would have got a rude awakening if she knocked on my door. I wrote hate mail to her, and any company she was associated with, for years, starting in 1970.

Pennsylvania isn’t flipping back to blue.

We love our Second Amendment.

Just shows they know that the crop of losers the D are fielding this round aren’t worth a shit.

I never understood why that twat was never charged with Article 3, Section 3, Clause 1 of the U.S. Constitution declares, that adhering to the enemies of the United States, giving them aid and comfort, shall be treason.

A long washed up mediocre ( so called ) actress.

I live in PA’s Coal Regions; the only Western towns East of the Mississippi. We are armed to the teeth.

But seriously, the Left in this country welcomed with open arms numerable people as worse or even much worse than her into government and other positions of influence or Trust: people who had not only known and fraternize with those making bombs to use in domestic terrorism, who cheered and celebrated that Helter Skelter crap, but also who were also baking and planting those bombs. People against whom Fonda was a piece of communistic Hollywood fluff in comparison and who shouldn’t have just been charged with sedition or it’s like on account of words or humping an enemy AA battery but multiple actual murders, conspiracies to commit murders and so forth.

The whole establishment Left is complicit, and many of the rank and file too, and they protect their own exactly as the old pre radical progressive Democrats did, where the seriousness of the charges only goes one way … just in an over the top way.

As with these AntiFa shits, there are a whole lotta people who really should have an HUAC land on them hard.