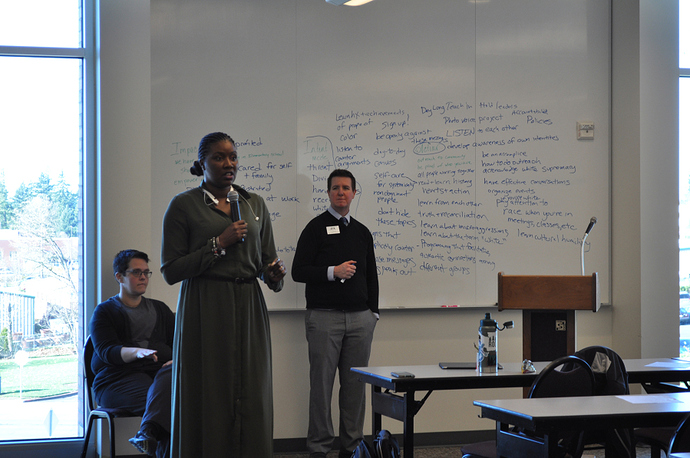 Why does such an innocuous statement rattle people so?

Clearly they don’t agree that it is okay to be White. The rise in anti-white racism is frankly disturbing.

The appearance of “It’s OK to be white” and similar posters on the Clark College campus left students and staff feeling frightened, angry and threatened, members of a crowded audience said at a community forum Wednesday.

As first reported by Oregon Public Broadcasting, “It’s OK to be white” posters first appeared on campus in early November, about a week before demonstrators waved signs bearing the slogan on an Interstate 5 overpass in Vancouver. “It’s OK to be white” posters have also been spotted on Washington State University’s Pullman campus and at other colleges across the country.

Ophelia Noble, founder of nonprofit group The Noble Foundation, called the forums and the crowds they drew a turning point.

“I think it shows diversity is what’s needed,” she said. “I feel that having the community represented in this room and respected in this space is a beautiful thing.”

The posters’ appearance at Clark College appear to make it the latest target in a widespread effort to encourage white Americans to support the far right. The Washington Post detailed the proliferation of “It’s OK to be white” posters across college campuses as a concentrated effort by the alt-right to recruit people into white nationalist circles. Posters on 4chan, an online forum which originated the meme, reasoned that white Americans would see news reports and criticism from minority groups as proof the media and liberals hate white people, creating a straw man to rally against and help persuade people toward far-right, white nationalist and white supremacist politics.

Dolly England, the college’s diversity outreach chair, recalled the frustration she felt finding an “It’s OK to be white” poster down the hall from the college’s office of diversity.

The appearance of “It’s OK to be white” and similar posters on the Clark College campus left students and staff feeling frightened, angry and threatened, members of a crowded audience said at a commun

They are saying it is not okay to be white, they are racists.

Now someone needs to do the same thing with its okay to be black and point out the hypocrisy.

‘Comments have been closed’ I wonder why.

Its ok to have gay pride demonstrations and flags, but not any straight shirts or flags. Its ok to have black pride celebrations and education but not white pride anything including the founding fathers of our country. Kind of confusing isn’t it !!! And I’m not a RACIST!!! Only looking for equality in the teaching of who the important people are who established our country.