Is MSNBC Bad for the Democrats?

I know some of you don’t like the messenger here, but listen to what she has to say, and see if maybe you don’t agree - just a little bit. 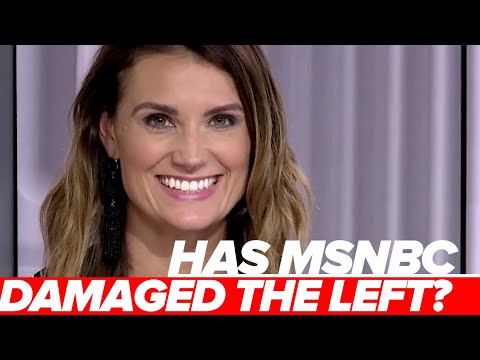 I have not watched MSNBC for years. I am guessing that I stopped watching it sometime between 2012 and 2016. I didn’t care for Krystal Ball much when she was there. She seemed shallow and kinda phony to me. I don’t recall exactly what the circumstances of her leaving MSNBC was. I recall thinking MSNBC was better off without her.

Pretty sure cable news rots your brain, regardless of its political persuasion.

If someone doesn’t get that the networks are enormously motivated by money to drive up the suspense and drama… then wake up.

I despised the way in which she kept saying that they were spewing conspiracies. MSNBC may have had far too many expectations and reaching lines of logic, but implying their claims were conspiracy theories is ignorant. Trump has taken enormous amounts of money in the past decades from Russians. His past sexual predator and child rapist accusation, self admitted sexual assaults, attacks on nato and all of our allies, combined with the hundreds of millions very likely given to him from Russia… how hard it it to posit that trump is extremely comprised?

Add to that his one on one private meetings with the leader of the enemy state accused of attacking the us which he refuses to allow anyone else in the room (used to have a translator, no longer)… and these smug anchors mock the theories about him and Russia as conspiracies? I don’t agree with either of them.

I think msnbc and cnn had ridiculous and stupid hopes for the Mueller questioning. I also don’t recall anyone out here in the real world having high hopes.

IIRC, she ran for office and lost her bid for a Congressional seat in I think 2014.

The only live video I (rarely) ever watch is C-SPAN. The rest is a sugar high of fancy graphics, portentous music, and wealthy talent pretending to be regular folks, while we get assaulted with ads from the highest-paid agencies.

I read and listen to radio like NPR for news. TV takes too long to deliver whatever information is actually present, and at a high cost to my composure.

My personal bubble indulgences are Randi Rhodes and Stephanie Miller, especially the latter for the disarming humor and important guests like Adam Schiff and Malcolm Nance. (I miss Rachel Maddow on radio.)

MSNBC is pure trash and everyone on that channel is a paid news actor. They are only capable of reading the screen in front of them and reacting with emotion and outrage to all things Trump.