Victor Davis Hanson Nails it in this article! Basically it sums up exactly what is going on with the discourse of the country and calls out the double standard being practice by people of the left and its supporters, especially as it pertains to China, which is central to every anti Trump supporter and the issues the they claim to care about, yet are perfectly happy to lick the boots of a communist foreign country such as China. The article suggests if it continues to go unchallenged we in the west will become politically repressed and just like China. This is an excellent read, and I certainly couldn’t do it justice with a synopsis, so don’t take my word for it!

Excerpts from the article:

"Far from a newly rich China becoming Westernized politically, the West and the rest of the world are more likely to become politically repressive like China.

Westerners, who apologize when Islamists kill cartoonists and journalists for supposedly insulting Islam, do not say a word when China puts a million Muslims into re-education camps, bulldozes Islamic cemeteries, and shuts down mosques.

Loud human-rights lions in Europe turn into kittens when it is a question of Chinese organ-harvesting, forced abortions and sterilizations, and the jailing and execution of dissidents.

American environmentalists demand a radical shutdown of the current fossil-fuel-based U.S. economy. They say little about greenhouse-gas emissions from China, the biggest polluter in the world by far.

Outspoken NBA athletes and hip Hollywood celebrities damn the Second Amendment, curse their president, and boycott states they find politically incorrect. But they become abject cowards when it comes to China.

College deans who weigh in on global morality say nothing about Chinese gulags or crackdowns against Hong Kong." 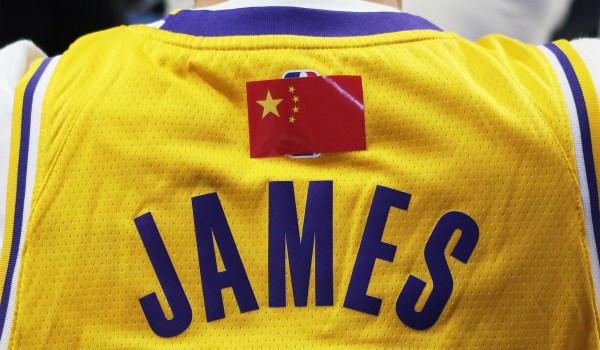 China does not fool around.

So many Americans are becoming weaker and weaker politically because they are afraid of the backlash from the screeching SJW mobs and the PC police. It’s to the point now where we HAVE TO fight back. When an employer fires someone for saying something conservative on their personal time then we need to hold that company accountable! We need to identify the people in these masked mobs and demand that they face justice for their ACTUAL crimes. I for one am tired of feeling pushed around.

Far from a newly rich China becoming Westernized politically, the West and the rest of the world are more likely to become politically repressive like China.

The exception is how well armed the American population is. The majority of this country is already fed up with this authoritarianism that started under Obama. Trump is actually fighting against it and we see the reaction from both Republicans and Democrats. They are all obedient to China because they are owned by China.

I agree totally and well stated! The only caveat I would add is that everything we are seeing as in the RINO big club and the Democrats is that China is central to all of it! There are literally trillions of dollars at stake where the global reset is currently taking place and those who have China in their portfolio, well they are the ones who are complaining the most. Sometimes when you plant your Apple trees in a another mans orchards you end up paying for the apples too!

What I find interesting is that a lot of folks are starting to get all butt hurt about China’s apparent influence in our politics and media - yet I don’t hear a god damn peep about Israel and the dual citizens in our Congress subverting the will of the American people.

Because China poses as a much bigger threat than Israel, in case you have been living in a cave for the past 2 years! Israel doesn’t have the second largest economy in the world, is stealing IP, and infiltrating our military secrets, nor are they communists. China more than any other country is subverting the will of the American people. Perhaps you need to get out more!

Because China poses as a bigger threat than Israel

How many dual Chinese-American citizens are in Congress? I am not minimizing China but I do see the hypocrisy here.

Good question! Elaine Chao certainly comes to mind. Tom Dickhead Liu? Just to name a few. Then there is Dian Feinstein who should be facing charges of treason for selling the Chinese state secrets! At best she should be investigated and charged and made to stand trial. Hillary, Kerry, etc. I can go on. and on, but maybe you can enlighten me!

They aren’t dual citizens and they don’t pass legislation making it illegal to criticize or boycott China. I am not saying it can’t happen in the future, because we are certainly on that path. I am simply saying that there is a double standard and shouldn’t be. We are further down the path of Israel exerting control and influence over this country than we are with China. The federal government is for the AMERICAN people…not for the Israelis and not the Chinese.

I totally agree and I certainly can have an honest conversation about Israel, and the lobbying efforts in our government however that subject matter just attracts the conspiracy nutcases hereto to which such conversation always devolves into a blind rabbit hole that is usually destined to entertain the whims of those who feed their mental masturbations and obsessions more than anything then having constructive analysis rooted in facts. It’s a total waste of time so for obvious reasons I choose not to go there. If you want to create a thread exploring this topic I encourage you to do so, however China”s subversion of our politics and sovereignty is much greater than Israel at the present moment and pose as our greatest threat! Israel is at least still considered an ally despite your misgivings which I am sure on some issues are valid points and needs to be addressed. The latter can only be done by getting big money out of our politics.

I am an American, and I don’t want my tax dollars going to Israel anymore. I believe that our unwavering support for Israel has screwed up our foreign policy in the Middle East because the Israelis have taken advantage of our kindness towards them and got us involved in all sorts of things that only ever helped them. I know this is an unpopular opinion, but that’s how I feel.

Well I respect your view on this topic, but this thread is not about Israel, so please don’t try to derail what the OP is about!

China was the example used by the author (not you) to demonstrate how America is shifting on issues, but in many cases you can substitute “Israel” for China and the statements and outcomes are the same.

That’s right - we wouldn’t want an open dialogue and people noticing the similarities, would we?

I disagree! I know this subject matter better than anyone and China has invested way more in subverting our democracy by way of economic aggression than Israel. BTW I posted the article because it confirms many things that I already have known years before anyone has talked about it. China is the biggest threat to the entire western world and doesn’t come close to what Israel represents! Like I said if you or anybody else want to air your grievances about Israel you are free to create a separate thread to discuss that!

GTFU! Go to Magog’s thread if it bothers you that much! He talks about it ad nauseam!

How do you not see the similarities here? So you only care that what was described in the OP is negatively impacting America and the American people when the Chinese do it…but your stick your head in the sand when the ■■■■ do it. What’s up with that?

No! Use your brains if you have one! I was very clear in what I stated in the OP. It’s a specific focus, and that is China. Try reading! No where in the article does it not only not make comparisons to Israel but it doesn’t even mention Israel by name! If I wanted to talk about making comparisons I would have included that aspect in my OP! So nothing to do with you making false equivalencies of me having my head in the sand! Stop being a dick! Don’t derail this thread! There are already threads on this topic here, so why are you not there airing your grievances there?

So you’re essentially complaining about authoritarianism in America…and you respond to things you don’t like no different than an authoritarian.

Looks to me like most people here are being respectful and using their brains. China is a scourge and is undermining our society, but many people believe that Israel is doing the same thing - they just never get called on it.

The author who actually wrote the OP talks about human rights abuses against Muslims - is it really a stretch for people to make the connection? Same for the leftist elites in the media and Hollywood. Same for the example of college deans and academia.

You opened the door and the TITLE of the thread asks if America is becoming sinicized. If you think that China is the only factor in this you are grossly mistaken.

Ok fine! But at least read my previous response to Heffe to know that I was not invalidating the point he or you were making. If you want to this thread to be about talking about Israel than why not create a separate thread for that? Or do you just want to blur the lines here and invalidate my objection as well for the sake of devolution of what the OP is suppose to be about?