In search of a meaningful identity

Europe and North America need to move beyond the left/right political axis and embrace something much deeper and meaningful.

Very good article! I enjoyed reading this as much as what is being conveyed is spot on in terms of a more profound meaning that gives people hope for which the country they reside in. Further meditations are needed on my part to digest what this article is really digging deeper at, but I get a overwhelming sense that embracing something that is beyond Identity politics is intimating that we are ripe to start looking and considering other options than the normal status quo.

The article starts with the flawed premise that conservatives are bound a piece of real estate. We are bound to the founding ideals that produced this country and our founding documents, not the physical country or gov’t.

Because having countries, and borders, and stuff doesn’t matter when we have ideas! Exactly why I say, Open Borders for Israel!

They need to tear down their wall too because it’s racist. They have their ideas to keep them safe. Celebrate diversity!

Those ideals are what made us who and what we are.

The real estate is irrelevant, start over with the same ideas and documents on another piece of ground and you have the same greatness in another location.

Those of us who serve take an oath to the constitution, nothing else.

Cool - apply that thinking to Israel.

We aren’t Israel, they don’t have our constitution, BOR, NWO’s, or DOI. Their purpose was to establish a ■■■■■■ State so that the ■■■■ of the World would always have a home.

Those of us who serve take an oath to the constitution, nothing else.

All enemies - foreign and domestic. You are an anti-American and I consider you a part of the latter. I don’t care what you claimed to have done and how many times you have claimed to have taken the oath. What you are claiming is a threat to America.

The real estate is very relevant. It is my homeland and it is under attack. Take your open borders fantasy and go cavort among the tribe.

So you are an open borders globalist for the US but not for Israel. All of your statements and responses just became irrelevant.

Israel is a sovereign nation, they can do what they want.

The real estate is irrelevant, start over with the same ideas and documents on another piece of ground and you have the same greatness in another location.

We aren’t Israel, they don’t have our constitution, BOR, NWO’s, or DOI. There purpose was to establish a ■■■■■■ State so that the ■■■■ of the World would always have a home.

Try posting of substance for a change. It would be refreshing.

Based on what he was replying to I think he gave all the substance necessary.

Of course you do. You people don’t react well to facts.

WASHINGTON—Construction is underway on a new, 13-mile stretch of border infrastructure in the Rio Grande Valley, southeast Texas, on April 4.

Part of the construction is a continuation of a levee wall in Hidalgo County, which will double as flood protection for local towns and agriculture. The levee will sit about a mile from the Rio Grande, which is the U.S.–Mexico international border.

The levee wall system will be very similar to that constructed in the area during 2008, but will also include all-weather roads, lighting, enforcement cameras, and other related technology, according to a Customs and Border Protection (CBP) statement.

A CBP official told media in January that a wall isn’t a magic bullet to stop illegal border crossings—but the critical factor is that it slows illegal incursions and buys agents time to respond… .

EXCLUSIVE: Homeland Security report says Trump administration has built just 20 miles of border wall and has funding plans for another 316 – despite White House claims that it’s on track for 500 by next year 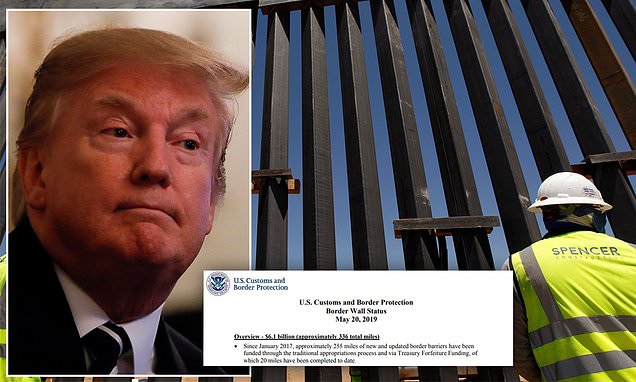 A report from U.S. Customs and Border Protection also shows it has a funding plan in place for 336 miles of walls, despite Trump's claim that he'll have 500 built by next year.

But by all means, never let facts get in the way of a good rant.

Imagine the outrage if there were a bunch of Palestinians waving a Palestinian flag demanding to be let into Israel.

And the (((Western Press))) would be all for it. Gottta keep Israel ■■■■■■ and White countries minority White.

Well they do that everyday so if your premise held true there would be no more “Palestinians”.

All the right words, but Europe and whites were already doomed long ago. In essence, politics is a circus freak show in a clown world, the future isn’t bright, and the sheep will never wake up, while being slowly chewed by Muslim wolves.
http://www.westernspring.co.uk/the-coudenhove-kalergi-plan-the-genocide-of-the-peoples-of-europe/