In New Insult to America, Nike Celebrates Not Standing For American Flag 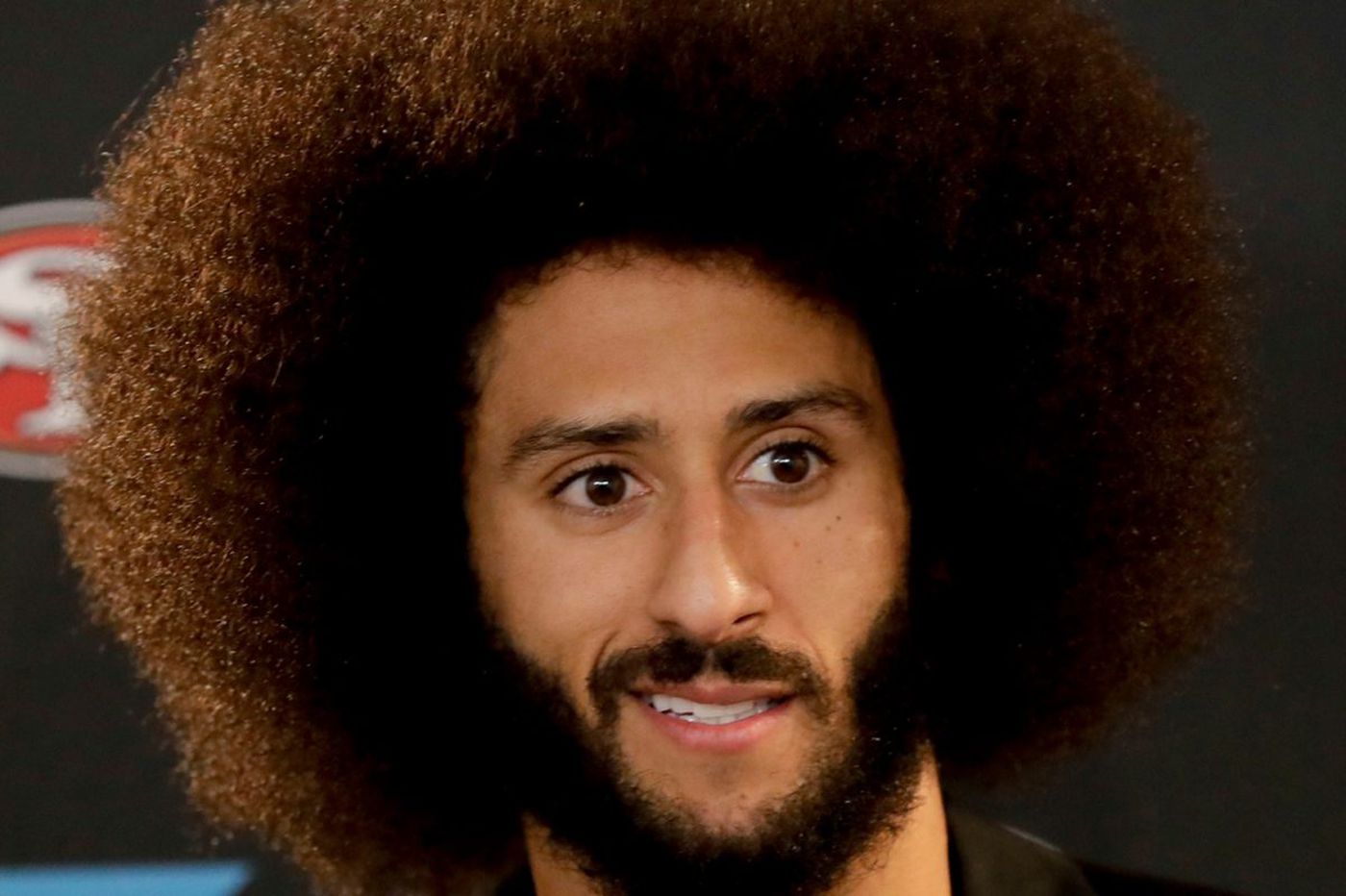 After pulling its Betsy Ross shoes after Kaepernick’s outrage, Nike is celebrating the day of the disgraced football player’s protest.

The athletic shoe brand sold out of its new Nike Air Force 1 line, which features a message commemorating the date Kaepernick refused to stand for the national anthem.

On the sole of each right shoe, the date “08 14 16” is emblazoned, marking the date Kaepernick began to kneel while the anthem was played.

CNN reports Nike confirmed the placement of the date, and its significance, to the cable news network.

This comes after Kaepernick successfully influenced the shoe brand to dump its popular Betsy Ross shoes earlier in 2019.

In July, Nike made headlines after confirming it would pull the American flag-emblazoned shoes at Kaepernick’s insistence.

Nike Inc. is yanking a U.S.A.-themed sneaker featuring an early American flag after NFL star-turned-activist Colin Kaepernick told the company it shouldn’t sell a shoe with a symbol that he and others consider offensive, according to people familiar with the matter.

The sneaker giant created the Air Max 1 USA in celebration of the July Fourth holiday, and it was slated to go on sale this week. The heel of the shoe featured a U.S. flag with 13 white stars in a circle, a design created during the American Revolution and commonly referred to as the Betsy Ross flag.

After shipping the shoes to retailers, Nike asked for them to be returned without explaining why, the people said. The shoes aren’t available on Nike’s own apps and websites.

“Nike has chosen not to release the Air Max 1 Quick Strike Fourth of July as it featured the old version of the American flag,” a Nike spokeswoman said.

The “old version of the American flag,” was the Betsy Ross flag, the original American flag design that, according to American folklore, was commissioned by the United States’ Founding Fathers during the Revolutionary War. 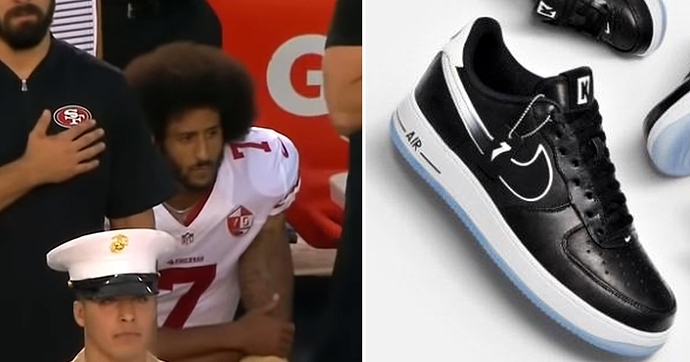 In New Insult to America, Nike Celebrates Not Standing For American Flag

At one point in time I was certain communism was more evil that capitalism. But it seems communism only starves you - capitalism destroys everything you love, humiliates you, then kills you.

‘Crony Capitalism’ is a precursor stage to Communism; this is the only thing I agree with Marx on. The US Govt is doing precisely what Marx recommended to fuck up and destroy an economy.

Marx said that there were two kinds of people; the wealthy Bourgeois and the poor Proletariat . He theorized that the Proletariat would find more and more of its wealth siphoned off by the Bourgeois by unfair, tricky, and underhanded means. He called this Primitive Accumulation.

One of the easiest ways to siphon off this wealth is by making the percentage of the proletariat that works work for lower wages. The simplest way to do that makes them redundant via immigration and whatnot. And the surplus population struggling to work, but can’t, become known as the ** industrial reserve army . The bigger that is, the lower wages will fall.

Then after the primitive accumulation facilitated the transfer of the vast bulk of the wealth into the very few hands of an elite but small Bourgeois , it would create a massive chasm between the poor masses and the small elite. This in Marxist theory is called the polarization of the classes.

This polarization would intensify as more and more of the wealth becomes concentrated in the hands of the rich, thus leading to the increasing bankruptcy of the Proletariat. This concentration of wealth would be ‘destroyed’ or what Marx called Creative Destruction or what’s more commonly referred to now as the Schumpeter’s Gale.

Creative destruction (German: schöpferische Zerstörung), sometimes known as Schumpeter's gale, is a concept in economics which since the 1950s has become most readily identified with the Austrian-born economist Joseph Schumpeter who derived it from the work of Karl Marx and popularized it as a theory of economic innovation and the business cycle. According to Schumpeter, the "gale of creative destruction" describes the "process of industrial mutation that continuously revolutionizes the economic...

So, after the creative destruction, i.e. the complete collapse of your economy, the commies can come in, have a revolution, and then take over your govt and fuck everything. The so-called great leap forward.

It sounds like what the government and big business are already doing. Marxism- they’re doing it right.

He can run & catch a ball. Is that what’s now considered an American hero? I guess many people live vicariously through sports figures; even those who are anti American. What I said; I can give you safe clean drinking water; but I’m not great at catching a ball & my running days are long behind me.

There’s no shame in being ignorant, only in staying that way.

How do you leftists square being so far left and also corporatists? It’s bizarre.

If you’re talking to me I’m pro capitalism. So long as it’s properly regulated for consumer and employee protection.

Nothing wrong with making money. I still have my American made All Stars. Cost me $27.00 about 9 or 10 years ago. Now very ugly from the mileage; but they have character. I never needed $300.+ sneakers to make a statement that I was stupid. Only a fool would lay out that kind of money. Our priorities are in the toilet. It’s not what the market will handle; it’s who is dumb enough to hand over the money. Ya gotta remember, we are not dealing with Rhode Scholars; but people who believe what I have is who I am.

The ONLY thing nike would understand is a total boycott of ALL their products !!! F them !!!

…and today’s $300.00 tennis shoes are made overseas for peanuts. People that buy them are paying Nike to employ poverty wage workers.

There is not a thing wrong with a company making money.What is wrong is listening to the VILLAGE IDIOT determining what products he considers politically incorrect and removing them. God forbid he becomes a business executive.

I’m not understanding your opposition to capitalism, the free market place, and businesses making their own decisions…

That is pretty much my stance when it comes to Nike! Anybody who wears that brand then spout off about being a SJW are fking hypocrites!

Nothing wrong with making money.

Right, even if it’s off slave labor overseas like much of the Trump brand… 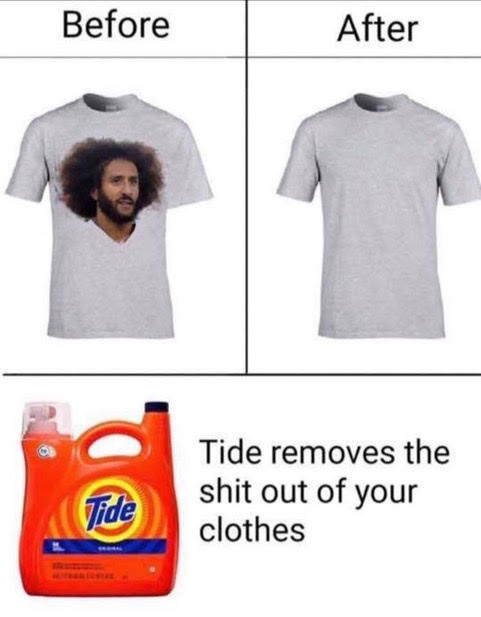 Why do you care about cheap labor , you were the moron that wanted every 2nd morons hired at $15 an hour , so we can never compete and even more products come in . You were the dipshit that hated tariffs and whined like a sissy about it . Make up your F-ing mind .