Have you heard about the Rainbows and Unicorns Resolution of 2019? It’s all the rage on Capitol Hill. In fact, most of the 2020 presidential contenders are buzzing about it, with many of them signing on as co-sponsors.

The Rainbows and Unicorns Resolution declares the intention of Congress to brighten the sky with magical creatures, thus ending poverty and ushering in a thousand years of world peace. How does it accomplish this feat? Why, by failing to contain any details, that’s how! That’s the benefit of encasing the Rainbows and Unicorns proposal in a nonbinding resolution instead of an actual law.

If you ever tried to spell out how such a thing would work in minute detail, people would most likely react with mockery. Even worse, they would point to the economy-destroying side effects of your legislation and hold you accountable at the next election. They might also balk at the multitrillion-dollar price tag that the Congressional Budget Office would attach to it. But as long as it remains a nonbinding resolution, the CBO won’t draw up any estimates of how much the plan will cost, and no one will have to produce any details.

By now, you’ve surely figured out that we are referring to the so-called “Green New Deal” that Rep. Alexandria Ocasio-Cortez, D-N.Y., her socialist pals, and half the Democratic 2020 field has now gotten behind. The outline explaining the measure, which is supposed to provide details, instead provides stage directions — for example, “important to say so someone else can’t claim this mantle.”

Having read through the proposal carefully, we understand why they are nervous about someone trying to steal their thunder. This resolution literally solves every problem on Earth. We’re surprised no one thought of that before.

The “Green New Deal” not only promises to zero out U.S. carbon emissions in 10 years but to do so without any trade-offs. Indeed, we will all get rich in the process by building new renewable means of electrical production and by “running train,” that is, replacing air travel with high-speed rail lines that have already proven such a huge success in places such as California.

Now, we know what you’re thinking. “Gosh darn it,” you’re saying to yourself, “this plan doesn’t sound ambitious enough. And there just isn’t enough work that will have to be done to make it happen.”

Oh, but the authors of this clever plan are two steps ahead of you already. The first thing they want to do is to take the nation’s entire nuclear power generating capacity offline! It’s a stroke of genius, because no one would have expected it. Who would have though that Part One of the “Green New Deal” would involve destroying 20 percent of U.S. power production, the only part that is currently both reliable at all times and carbon-free?

And so, by requiring all this additional work to achieve their goal, the authors of the “Green New Deal” are able to guarantee jobs for everybody. If your arms get tired from building all those windmills, then you can help generate carbon-free power by running on a treadmill for a few hours every day. With the new $15 minimum wage, just think of all the extra money you’ll be making.

Having said all that, the drafters of this proposal were careful to temper their optimism. “We set a goal to get to net-zero, rather than zero emissions, in 10 years,” the authors explain in elegant prose, "because we aren’t sure that we’ll be able to fully get rid of farting cows and airplanes that fast … "

It’s hard to see why they should limit their vision, given the rest of the promises they make. But you know what they say, “over-promise, under-deliver.” 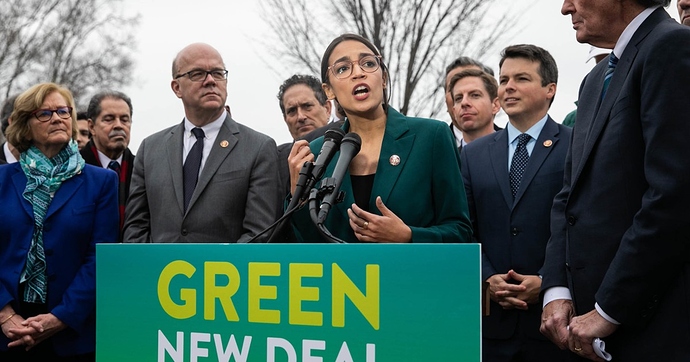 Against the Rainbows and Unicorns Act of 2019

Have you heard about the Rainbows and Unicorns Resolution of 2019? It's all the rage on Capitol Hill. In fact, most of the 2020 presidential contenders are buzzing about it, with many of them signing on as co-sponsors.

These types of “resolutions” are to trigger the young and gullible to say, “Yeah I’m for that cause, it’s good!” The less details shown leaves it to their imagination and now you have a movement. Details are left for the others because the young are busy trying to fit in with their peers.
Priorities, priorities.

The same thing happened with the Obamacare bill…we have to pass the bill to see what’s in it.

Talk about pie in the sky…and as Alex mention, it was for young and gullible.

Again preying on our young.

If liberalism didn’t appeal to young fools, it would appeal to nobody. Wisdom comes with age…and being screwed a few times on the way to awareness.

Its all about indoctrination and brainwashing. Our education system was taken over by LIBs years ago. The youngest generation has been indoctrinated by LIBs at every grade level, all the way through college. Is it any wonder that they embrace AOC lunacy? They don’t know any better.

What’s really scary here is that they are now of voting age and will vote for these lunatic fringe candidates in droves.

Why else would these lunatics now get any kind of an audience? Even a few years ago, these lunatics would have been run out of town, while saner voices moderated the political discussion. Not any more, the young voting block is now positioned to have an impact. And that impact could have some serious dire consequences. 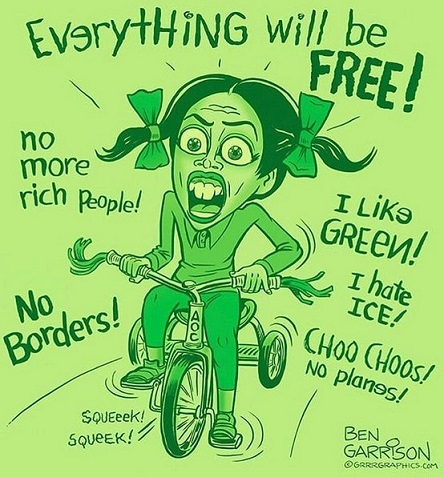 You had to see this coming. This is from the same party that wants to allow middle school kids to vote. Why do you support disenfranchising the children?