Illegal immigration soars under Biden to third-highest in 97 years, So much for the monte lie

Illegal immigration soars under Biden to third-highest in 97 years

Nearly 2 million people were encountered by federal law enforcement while attempting to enter the United States illegally over the past year.

Data released Friday afternoon by U.S. Customs and Border Protection shows that federal law enforcement officials stopped 1,956,519 noncitizens who tried to gain entry to the U.S. by walking across from Canada or Mexico, entering by way of the Atlantic or Pacific coasts, or passing through an air, land, or sea port. 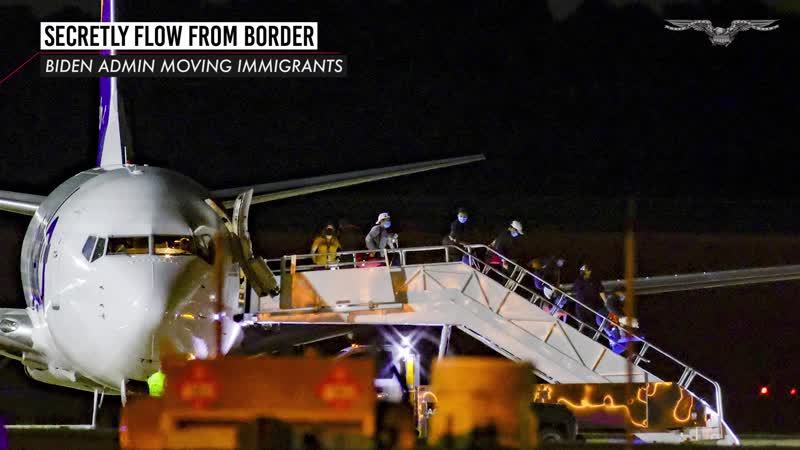 In fiscal year 2020, border officials encountered 646,822 people nationwide, federal data show. In 2019, a year in which both Democrats and Republicans declared a “crisis” at the southern border, 1,148,024 people were taken into custody. CBP would not provide data from before 2017, when 526,901 encounters were made.

Illegal immigration to the U.S., the extent of which cannot be fully known because of how many evade federal police and get away, has risen at a faster rate in the first nine months of President Joe Biden’s tenure than any time in the Border Patrol’s 97-year history.

The large majority of the 1.9 million, 1.66 million, were stopped by the Border Patrol, who work in the land between ports of entry on the Canadian, Mexican, and coastal borders. The remaining roughly 300,000 were denied entry at ports of entry.

The large majority of the Border Patrol’s encounters took place at the Mexican border. Over the past decade, roughly 30,000 to 50,000 people have been encountered illegally crossing the southern border each month. That number dropped to below 20,000 at the start of the coronavirus pandemic, partly as the result of a Trump administration order that any child, adult, or family who illegally crossed be sent back to their home country rather than taken into custody.

But illegal crossings from Mexico began to rise through the summer and fall last year as the Border Patrol was only able to turn away migrants but did not refer them for prosecution, essentially giving people unlimited tries to get into the U.S. without getting caught. The 20,000 figure rose each month and hit 71,000 people in December 2020, weeks before Biden took office.

After taking office on Jan. 20, the Biden administration told migrants not to go to the border. However, it stopped turning away children who showed up alone at the border, and in the months that followed, more children showed up at the southern border than at any time in U.S. history.

Alejandro Mayorkas, the secretary of homeland security, said in an ABC News interview in March that ‘now is not the time to come,’ but that the U.S. was ‘building safe, orderly and humane ways to address the needs of vulnerable children.’ 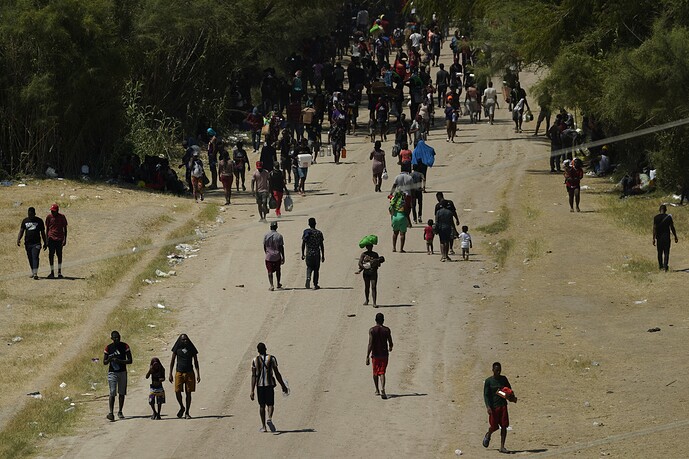 Haitian migrants move along a dirt road after crossing into the United States from Mexico, Friday, Sept. 17, 2021, in Del Rio, Texas. Thousands of Haitian migrants have assembled under and around a bridge in Del Rio presenting the Biden administration with a fresh and immediate challenge as it tries to manage large numbers of asylum-seekers who have been reaching U.S. soil. (AP Photo/Eric Gay)

In total, 146,925 unaccompanied children were encountered at the southern border, between the ports, and at the ports of entry. It nearly doubled the record set in 2019, when 80,000 children came to the border.

As more children streamed to the border from Central and South America, more adults and families also began arriving.

Border Patrol surpassed 169,000 encounters in March and 173,000 in April as Biden eased border policies, including ending the Migrant Protection Protocols implemented under Trump that had forced migrants to live in Mexico while asylum cases made it through the courts.

The change meant people fleeing their homes or coming to America for economic reasons would overwhelmingly be apprehended at the border but quickly released into the U.S., oftentimes not being given court dates but told to self-report to Immigration and Customs Enforcement in whichever city they ended up. If they showed up to ICE, they would be given documents that allow them to work in the U.S. legally, and only then would they be put into the immigration court system, which has 1.4 million cases before approximately 500 federal immigration judges.

Mayorkas falsely stated in September that migrants were put in court proceedings when released from the border. However, the majority of migrants released from Border Patrol custody are not put in court proceedings. Because asylum-seekers cannot seek protection until appearing before a judge, the Biden administration’s releasing people without first giving them court dates makes seeking asylum a challenge for migrants.

More than 479,700 people arrived as part of a family, 2,100 were accompanied minors, and the remaining 1,105,925 were single adults. Of the 1,734,686 who came to the southern border, 1.04 million were immediately turned away under the coronavirus health policy known as Title 42, and 618,000 were taken into custody. CBP does not disclose how many were released into the country or where they are residing.

Border Patrol Chief Raul Ortiz told reporters at a press conference in August that South Texas saw 60% of known illegal crossings, though all nine of the regions that the Border Patrol divides the southern border by have been dramatically affected by illegal immigration over the past 12 months.

Biden initially explained the uptick in illegal migration this spring as “seasonal.” But the numbers have continued to spike through the summer months when fewer migrants have historically been apprehended at the border because the hot temperatures act as a deterrent.

This spring, Homeland Security Secretary Alejandro Mayorkas rolled out the Biden administration’s four-prong plan to stem the flow of migrants illegally entering the country. This included addressing the root causes that lead people to leave their home countries, rebuilding the asylum process, improving border security management, and taking down smugglers. To date, the Biden administration has not made substantive progress in any of the four areas.

If we don’t have mass deportations next 5 years this country is over, we have no votes or voice to keep America American

The Democrats and ALL the Far-Left NGOs in America are LITERAL TRAITORS. They HATE America, they WANT to DESTROY this nation.

Joey Bidet and Kameltoe and Mark Milley and ALL US Military Top Brass are TRAITORS and are in violation of their Oaths of Office to PROTECT this nation, they are ALL National Security threats, there is ZERO stopping Islamic Terrorists from walking across our borders with some Dirty Nukes and setting them off across the nation.

We have NEVER in history been THIS vulnerable and our vulnerability is by DESIGN, it’s DELIBERATE.

If we don’t have mass deportations next 5 years this country is over, we have no votes or voice to keep America American 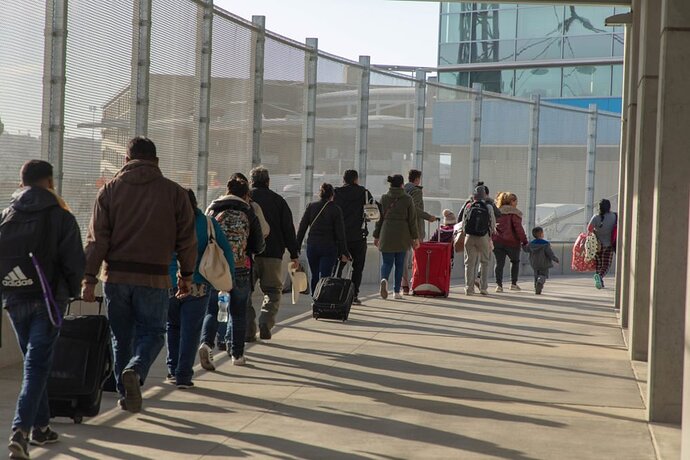 When America IMPLODES and CRASHES we MUST ensure that people like us ie. actual Patriots STILL REMAIN, it will be up to us to rebuild America from the ashes that the Democrats are going too reduce it to.

The Democrats and ALL the Far-Left NGOs in America are LITERAL TRAITORS. They HATE America, they WANT to DESTROY this nation.

Well that’s false, as is the thread title. In the first two lines of the op it’s acknowledged that CBP STOPPED 2 million non citizens who tried to gain entry. That’s what they’re suppose to be doing….right…

When America IMPLODES and CRASHES we MUST ensure that people like us ie. actual Patriots STILL REMAIN, it will be up to us to rebuild America from the ashes that the Democrats are going too reduce it to.

there is ZERO stopping Islamic Terrorists from walking across our borders with some Dirty Nukes and setting them off across the nation.

More fear mongering….
Sense there’s an unprecedented number of migrants coming to the border, it’s clear that the CBP is doing a good job.

But undocumented immigrants have been entering America for many many decades, estimates are anywhere from 11 to 20 million depending on where you look…

And the areas they stay in are high in crime, murder, rape, drugs deaths. Care to move this way? Hehe

A report from the New York Post claims the Department of Homeland Security shelled-out more than $450,000 to erect “security” fencing around Joe Biden’s Delaware Beach House.

“The southern border with Mexico is seeing the highest levels of illegal border crossings in 35 years, but the Department of Homeland Security has found one access point it can shore up — doling out $455,000 to a Delaware construction company for a fence around President Biden’s ‘Summer White House,’” reports the Post.

“In September, the department awarded a contract of $456,548 to Turnstone Holdings LLC for ‘PURCHASE AND INSTALLATION OF SECURITY FENCING,’” adds the newspaper. “The contract started Sept. 21 and is expected to end Dec. 31. Construction of the fence is expected to end by that date.”

The report comes as the DHS confirmed more than 1.7 million foreign migrants were apprehended during fiscal year 2021, the highest figure since 1986.

There are more non US citizens arriving at the border now than there was during the Obama and Trump administrations, true enough. But CBP has apprehended more as well which means they’re fulfilling their responsibilities just the same as they always have….

Haitians, driven from their homes in a massive humanitarian crisis caused by both nature and man, first earthquakes then hurricanes then the assassination of their president….are driving up the numbers at present….

So where do the hatians live? Not with you, why not?

And the law says they must go back and apply for Asylum. Not cross and stay