That should get the Democrat Party 22 million votes overnight. 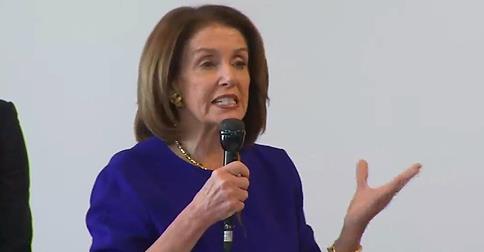 Pelosi raises eyebrows, argues politicians should not be ‘suppressing the...

House Speaker Nancy Pelosi may have let the cat out of the bag when she argued this week that politicians should not be “suppressing the vote of our newcomers to America.” “[N]ewcomers make America more American. And we want them, when they come...

The 2020 elections are coming up fast – and that’s why the issue of illegal aliens and immigration is a to-the-death fight in Washington now.

After all, immigrants and illegals who actually are signed up to vote, even if completely illegal, are perceived generally as supporting Democrats, so that party hates the idea of any Voter ID or voter authentication plan.

As Nancy Pelosi suggested, all the “newcomers,” especially those coming through the “southern border,” should be voting. Nancy Pelosi will say things like this - knowing full well it is completely illegal - and then turn right back around and say voter fraud doesn’t exist.

We all know what’s going on. We are treated like the serfs who have no say. We need to remind these people of who they are messing with.

We need to rid ourselves permanently of Nancy Pelosi and her ilk. Her stupid mentality is to let the world population vote in our elections.

In forums, they once hid behind such trolling as “give me a list of Democrat leaders who advocate illegal aliens voting”.

They don’t even hide anymore.

Never gonna happen. Politicians never face any consequences for their actions. We were never meant to have a ruling class like this.

That is why we need to get rid of them.

Haven’t really seen much coming out of the DOJ on this. Didn’t Trump start up a commission to look into voter fraud around the time he took office?

Didn’t Trump start up a commission to look into voter fraud around the time he took office?

Yes he did…and the commission got little help from some states in that they would not release the information necessary to determine fraud. The fact that Trump disbanded the voter-fraud commission gave the libs additional impetus to say that there was none.

Some of the failures to release information were due to state laws so I can’t say that the states were deliberately being obstinate.

Didn’t Trump start up a commission to look into voter fraud around the time he took office?